“We gotta remember, we are watching a comedy.”

1. This is Fanning’s first commentary. “A lot of this movie is Elle’s first,” adds Refn.

2. Refn says while they’ll be talking about the film he has no intention of “giving away all the secrets, so basically this is half the truth.”

3. Christina Hendricks was the first cast member Refn spoke to about the film, and when she asked what kind of horror film it was going to be he replied “A lot of blood and high heels.”

4. Fanning has a trick where she can hold her eyes “open for a really, really, really long time.” She says she realized afterward that the hot lights for the opening scene actually burned through her contacts. This sounds like an exaggeration, but Refn replies “fucking hell” so it seems he buys it.

5. Karl Glusman was recommended to Refn by Gaspar Noé, and unlike apparently many young actors who came to audition for the role he did not arrive wearing the scorpion jacket from Drive.

6. Refn points out the symbolic nature of the opening line ‐ “Am I staring?” ‐ in relation to the film’s later shot of an eyeball.

7. Fanning says the fake blood is edible and tastes like “bubblegum and mint.”

8. Refn was unaware that Abbey Lee was a supermodel until Fanning told him. Are supermodels even a real thing anymore? Yes. Apparently.

9. Refn asks Fanning if she felt intimidated by the women around her seeing as she was only sixteen years old during filming. “I actually did,” she says, pointing out that Jena Malone is intense and the models are beautiful.

11. The film was shot on digital over seven weeks on very little money, and while Refn found it frustrating he enjoyed how it forced his hand creatively.

12. The woman bound up at the party is a crew member who volunteered after Refn realized he couldn’t afford to pay someone. “Apparently it’s sexually stimulating,” he says, suggesting that’s why the young woman from the costume department volunteered.

13. Before officially casting her in the role Refn asked Fanning if she thought she was beautiful, and she laughed before saying “yes.”

14. The motel where Jesse (Fanning) is staying was scheduled for an upcoming “motel makeover” show, and Refn asked if it could be held until after they finished filming there.

15. “I’ve never shot driving scenes on blue-screen,” he says, adding that he “very much liked it.” The visual design he was aiming for with the film was a mix of the imaginary and synthetic.

16. Refn says the blurriness in some of the early nighttime motel scenes are due to grease from cinematographer Natasha Braier’s forehead. “There was no Vaseline around, she would just take her greasy forehead and rub the lenses so you have this kind of almost fogginess that gave a great sense of fantasy.”

17. Fanning was still sixteen during the filming of the scene where she strips down for the photographer, and she recalls everyone being concerned they got “the right bra and underwear so it doesn’t look like…” She had a second layer of underwear beneath the ones she removes below frame. Refn acknowledges it was intense, “I mean I have daughters so I was like what would I think of having my kids in scenes like that.”

18. The scene with all the models sitting on folding chairs in the underwear features “$1000 a day models.” The more expensive ones wouldn’t come down in their price.

19. Alessandro Nivola originally read for the role of the photographer Jack, but when scheduling didn’t work out Refn looked elsewhere for a role for him. They settled on the fashion designer, Sarno, named after sexploitation director Joseph W. Sarno.

20. The idea behind the underwear cattle call was to make it “look like a slaughterhouse.”

21. The scene where Sarah (Lee) shatters the bathroom mirror involved a complicated setup and elaborate planning, but it didn’t quite work. They filmed her throwing a sock and set up for a stuntman to throw a vase that would actually shatter the mirror with the plan being to comp the two halves together so it looks like she’s breaking it. The stuntman was unable to break the mirror though, so they had Lee throw the prop thinking they could fix it digitally later, but she actually succeeded in shattering the mirror.

22. They held the film’s Los Angeles premiere in the Hollywood Cemetery, and Ryan Gosling ran the Q&A.

23. When Dean (Glusman) shows up at Jesse’s door Refn suggests it’s imbued with meaning. “And now the flowers arrive, and what does the flower represent? And the color of the flower, plus the background of him has a meaning later on.” So that’s cleared up.

24. The hands pressing from the other side of the wall represent the womb and something being born inside of Jesse. Fanning thought they were Refn’s hands, but he says they actually belonged to producer Carsten Sparwath because “he had bigger hands.”

26. They excitedly point out the arrival of “the Neon Demon” at the 1:01:20 mark. “The narcissist, she finds the liquid, falls in love, and comes back through the other end. Whereas a narcissist he continues to reach for it as he is drowning, she actually comes into the other side, and the world will now change.” Obviously.

27. The restaurant they enter at 1:05:10 is Hollywood’s Musso & Frank Grill, and it was the film’s most expensive location.

28. Refn points out Taylor Hill as the unnamed model sitting between Sarno and Gigi (Bella Heathcote). Sarno quotes Shakespeare, and Refn says “I do think that Taylor Hill is quite amazed at the words because she’s trying to understand them.” He adds that she actually tested for the role of Jesse before Fanning was cast.

29. The scene where Hank enters Jesse’s room and sticks the knife in her mouth was filmed multiple times, and Fanning says it was “kind of like fun, I kind of like enjoyed it.”

30. They discuss how different the film could have been if Fanning wasn’t underage during filming, and both agree that the limitations of her age actually serve to enhance the finished film.

31. The scene where Ruby (Malone) gets busy with a female corpse required digital post-production to hide the “dead” body’s breathing. Regarding Malone’s performance, Refn says “she’s really an example of someone who is willing to go places that enhance everything.” 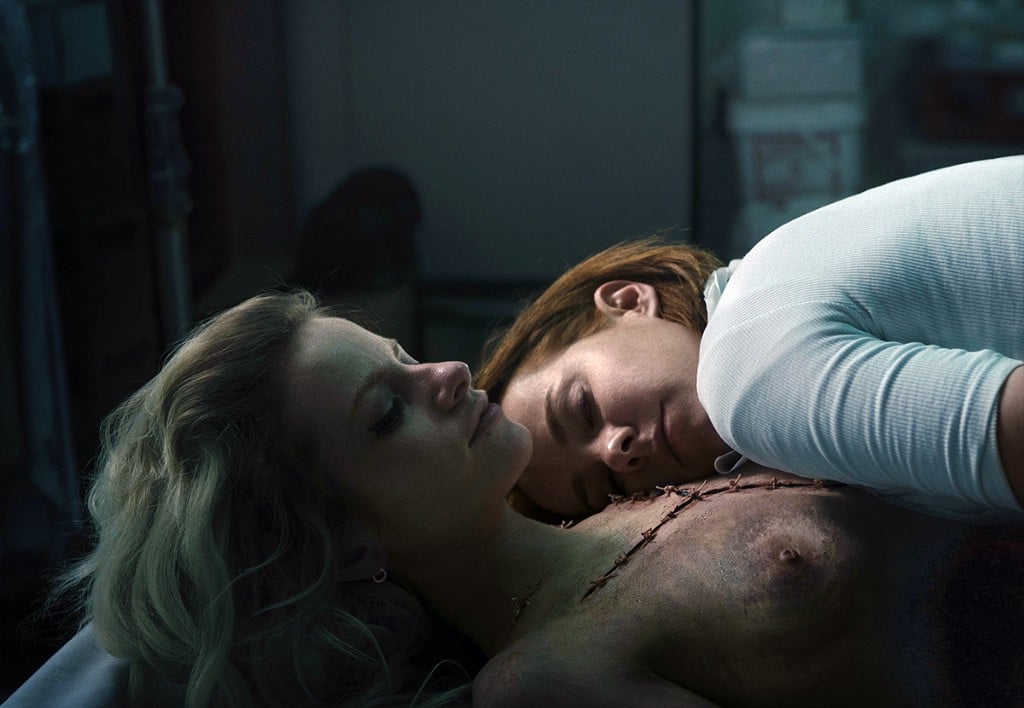 32. Ruby dies in the original script, but they filmed the morgue scenes early in production (due to only having the location for one day) and after viewing Ruby’s interaction with the dead Jesse lookalike Refn decided that the second half of the film needed to change.

33. The crew was concerned for Fanning as she stood on the diving board over the “empty” swimming pool, but it was filled with empty cardboard boxes below frame in case she fell. 35. Lee actually hit Fanning in the scene where Sarah enters the hall and punches Jesse. Fanning says it was an accident, but Refn adds “Well that’s what we say afterwards.”

36. It was Malone’s suggestion for Ruby to have tattoos on her torso, “and when I saw the tattoos I was like ‘oh my goodness!’”

37. Fanning is surprised that the first time some viewers realize the models ate Jesse is when Sarah actually says “I ate her.” I’d argue it’s a fair thing to miss as the preceding action never makes that clear. If anything it looks like the three women dismembered Jesse and simply bathed in her blood as there’s no insinuation that they ate her until Gigi coughs up the eyeball.

38. Los Angeles is Refn’s favorite place to shoot “because you can do so many things. The magic of Los Angeles is so enormous, maybe it’s because I don’t live here.”

39. Lee had to eat nearly a dozen eyeballs.

40. Refn wasn’t sure where to end the film before finally deciding to take Lee to the desert and shot “a perfume commercial with her walking in the desert because the movie becomes essentially its own brand.”

41. The film’s dedicated to his wife Liv because she was the inspiration for the tale. “I woke up one morning, I realized I wasn’t born beautiful, but she was, and I decided to make a horror movie about it.”

“That’s another thing you can put on your CV is you don’t breathe.”

“With passion there’s nothing you can’t do.”

“So the moral of the story. Don’t change your look.”

Bronson, Valhalla Rising, and Drive are three disparate, visually creative, and entertaining films, but Refn has lost me a bit with his last two movies. Both strike me as excessive style over the most basic of ideas, and Refn’s commentary seems to confirm that. His intent seems very much visual-based with only slight thought given to character or narrative. Basically, the track confirms my feelings on the film, and I’m curious if it will do the same for listeners who like The Neon Demon.