‘Mac Finds His Pride’ is the show at its bravest, most serious, and absolute best.
By Liz Baessler · Published on November 8th, 2018

The thirteenth season of It’s Always Sunny in Philadelphia has come and gone. Between a crop of new writers and Glenn Howerton’s only partial commitment, it’s been an uneven 10-episode run. There were some low points (that Superbowl two-parter didn’t quite live up to the hype) and some truly high points (“Time’s Up for the Gang” proved that even a thirteen-year-old show can have a fresh take on social issues).

And then there’s the last five minutes of the finale.

To quote one of the show’s oft-used phrases, Jesus Christ, dude.

Rob McElhenney (Mac) has passed off his latest outrageous body transformation as purely comedic, a riff on the tendency in media for regular guys to take off their shirts for no reason and be unbelievably buff underneath. And that’s certainly part of it. It’s a joke that plays well in the premiere, when he unveils his new physique to confusion and absolutely no acclaim from the rest of the gang. But let’s be honest: It was really for the spectacle (and the sheer athletic feat) of that dance sequence.

And good God was it worth it.

The episode, entitled “Mac Finds His Pride,” centers around what is probably the show’s rarest pairing: Frank and Mac. (Honestly, have those two had any adventures alone together since Rum Ham?) The decision makes a lot of sense, and Frank is the perfect foil for Mac’s search for his new identity as a gay man. A good 35 years older than everyone else, Frank has forever been the gang’s most outdated and out of touch member. (Mac’s coming out last year was kickstarted, after all, by Frank calling him a faggot).

So Frank’s role as reluctant fairy godmother to the bar’s Pride float’s “prize gay” makes for some great lines shouted across cultural and generational divides that only Danny DeVito could deliver. It makes up a large portion of the episode, and it’s funny enough in its own right. But it also leads to the show’s greatest moment of growth and reconciliation, as Frank is moved to tears by Mac’s attempt to come out to his father. With Mac’s dad having long ago stormed out, Frank takes on the role of the proud parent Mac has always sought.

The episode may be called “Mac Finds His Pride,” but in that final moment, Frank has discovered a pride all his own, for the only member of the gang who isn’t in some way his child, and who’s always desperately wanted a father.

It’s an unimpeachable emotional performance from DeVito, and another reason he’s the only logical choice for Mac’s counterpart. Danny DeVito is a veteran film actor, and while he usually relishes the dirtiest and strangest things the show can throw at him (the man can eat on camera like no one else), he’s also capable of incredible depth.

Those final five minutes have a cinematic quality to them that the show has never even approached before. Here’s an exercise: Pick out someone you know hasn’t seen this episode, show them that final shot of DeVito, eyes wet with revelation and respect, and ask them what it’s from. I dare you to find a single person who guesses It’s Always Sunny in Philadelphia. 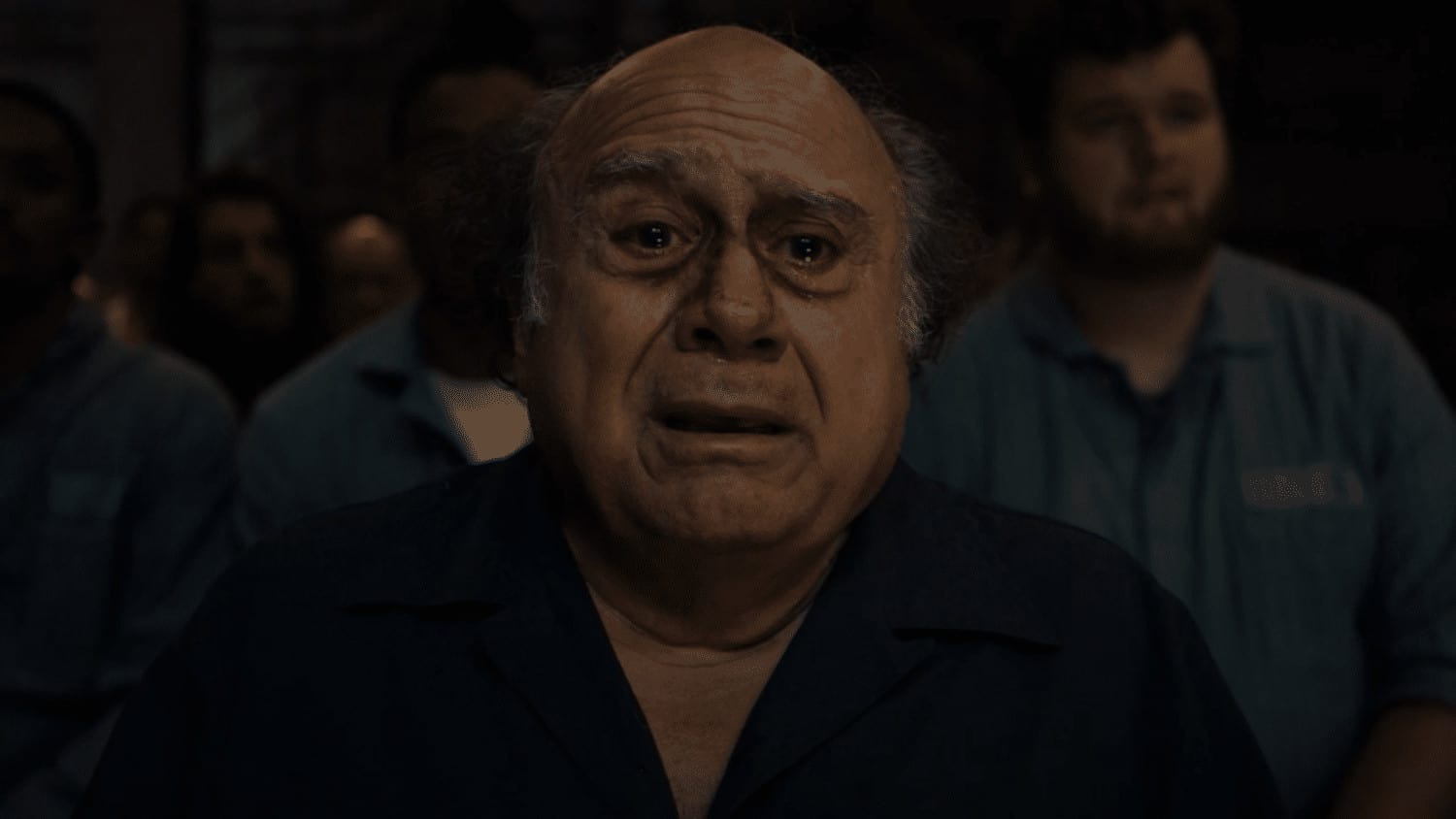 But while Frank’s moment of revelation is beautiful, it’s nothing compared to Mac’s dance. The whole sequence, in which Mac tries to voice the struggle he’s felt his entire life, is artful and audacious and honest-to-God stunning.

Its explanation is parsed out skillfully — Mac gives a straightforward (if muddled) interpretation early in the episode:

“There’s this storm inside of me, and it’s been raging my whole life, and I’m down on my knees and I’m looking for answers, and then God comes down to me, and it’s a very hot chick, and she pulls me up and we start dancing.”

At the time of the explanation, it comes off as a joke, and a good one at that. For years one of Mac’s defining features has been the conflict between his sexuality and his faith, and the mental acrobatics he’s done both in and out of the closet have been the source of a lot of laughs.

Even this season, when asked if he’s more gay than he is Catholic, Mac shows wonderfully genuine consternation and says “I don’t know. They’re at war.” Maybe he started choreographing his dance that very day.

It’s a good thing he did. Because while Mac’s hopeless attempts to define his feelings become even funnier with repetition (his dad’s interpretation that he’s “finally knocked someone up” is as hilarious as it is heartbreaking) they get the hard parts out of the way and pave the road for the dance itself, offered up perfectly without explanation and without any attempt at humor. Five minutes straight without a joke in this show is beyond a record.

But they’re arguably the best five minutes it’s ever done. Emotional moments in Always Sunny are exceptionally rare. Sometimes they work. Sometimes they don’t. I tend to be a sucker for them, largely because their scarcity gives them such a punch.

But this emotional moment is a different animal altogether. There’s no stinger, no last-minute joke to let the air out a little. The episode (and the season) ends on a conflagration of intense emotions: Mac’s struggles with God, his father, and himself, and on Frank’s epiphany: his understanding, at 75 years old, of a completely different point of view that he vowed several times over he was never going to get.

The emotional payoff comes not just from the characters, but from the artistic achievement of the show itself. It means so much not just because of what it is, but because of where it’s come from and how much it’s evolved. It doesn’t look or feel anything like the show it began as thirteen years ago.

Hell, it doesn’t even feel like the show it was last week.

Not that there’s anything wrong with what it was like before. But after thirteen years of doing something that works, trying your hand at something that might not work is worthy of praise. Five minutes without a joke in a half hour comedy is brave. A wordless, completely serious dance on a dark stage with a comedian who is not a dancer is something else entirely.

And the payoff is exquisite. The dance, performed in the rain with the outstanding Kylie Shea and set to “Varúð” by Sigur Rós, is a sight to behold, and not just because of McElhenney’s body. It’s spare, and emotive, and gorgeously shot. It’s a balm of visual and aural beauty that gathers up a decade and a half of jokes and insinuations and transcends them into something raw and fiercely human.

Granted, Rob McElhenney wrote most of those jokes and insinuations himself, and there’s nothing wrong with that, either. This show has a fascinating history of evolution over the years as it’s ridden with the times and what it is able or willing to reach for. McElhenney created Always Sunny in 2005 out of a sense of frustration and desire for creative control. If it’s anyone’s show, it’s his. And this is very much his episode — shared with Charlie Day, this is the only one of the season he has a writing credit on. And just like no one asked him to make this show, or to gain 60 pounds, probably no one asked him to get into incredible shape, or to perform a deadly serious interpretive coming out dance.

Rob McElhenney does precisely what he wants with the end of this episode, conventions be damned, and the result is possibly the most stunning scene on television this year. All that being said, the rest of the episode isn’t perfect.

Dee and Charlie are barely seen, clearly there only for the sake of being in the finale… which is all the stranger due to Dennis’ absence. He’s at least mentioned, meaning he hasn’t run back off to North Dakota for the hiatus, but it’s an odd choice to pay such short lip service to Dee and Charlie’s presence and not at least film it on a day that Howerton was on set.

Even Frank and Mac’s scenes aren’t problem-free. Frank’s incessant barrage of face battery and his attempts to “fix” it are fun, sure, but like much of “Charlie’s Home Alone,” they lean a little too hard on grotesquerie and shock. With so many serious conversations about identity and acceptance, Frank’s latest remedy is sometimes the only funny thing to happen in a scene, and it’s relied upon perhaps too much to do the heavy comedic lifting.

Granted, it’s easy to read Frank’s self-destructive balms as an analogy for Mac’s own years of repression, and it’s all but shouted when Frank exhorts him to let the blood out, like he has. It’s a nice analogy. I only wish it hadn’t already been used last week, when Frank’s kidney stone represented the pent up frustrations of Philadelphia Eagles fans. I’d be curious to know which was written first.

There’s also the slight hiccup that, canonically, Mac’s dad has had sex with men outside prison before. We learned about it in “Mac Kills His Dad,” and so did Mac — at the time it was yet another opportunity for him to willfully misinterpret the obvious signs before him to comedic effect. Now it’s something we more or less have to retcon to give the finale its full impact, but that’s easily done. I’d forgive and forget virtually anything for the sake of that ending.

As far as this episode is concerned, Mac is a man who’s always sought his father’s approval, performing a massive feat of bravery by sharing something in a vulnerable and intimate way that’s likely to be met with disapproval. It’s a special, daring, and essential story to tell.

And it came from that comedy you and your buddies watched in college and didn’t even know was still on.

Always Sunny hasn’t always been on point this season, but it’s been on more than enough. In recent years it’s gravitated more and more toward the artistically and creatively audacious, giving us a musical episode, a true crime episode, one inside Frank’s head, one inside a locked room slowly filling with water. We even got a parody of Ski School, a film not much of the show’s main demographic has probably even seen.

But this episode is something else entirely, an expression of artistry that’s beautiful in its own right, but even more beautiful in context. It’s as stunning for its exquisite execution as for the fact that it came absolutely out of nowhere.

“Mac Finds His Pride” isn’t flawless. But those last five minutes might be.