110 years ago, a cinematic legend was born. No one before or since has occupied the same cultural space.
By Brad Gullickson · Published on October 27th, 2021

October is defined in Webster’s Dictionary as “31 days of horror.” Don’t bother looking it up; it’s true. Most people take that to mean highlighting one horror movie a day, but here at FSR, we’ve taken that up a spooky notch or nine by celebrating each day with a top ten list. This article about the best Vincent Price horror movies is part of our ongoing series 31 Days of Horror Lists.

No one did lecherous or diabolical quite like Vincent Price. Well, that’s not true. Yes, we’ve seen many actors portray deplorable and rotten characters, but often those actors who play those characters do so for brief moments in time. There really aren’t any other actors who were or are currently allowed to portray lecherous and diabolical characters over and over again in leading roles. But there was something about Price and the way he played monsters that encouraged our attention. With his beasts, we never turned away, and we asked him to bring them back to the screen repeatedly. His bad was eternally watchable.

2021 is the 110th anniversary of his birth. It’s the perfect year to pull up his filmography on IMDb and start blitzing through it. He made a lot of films (210 credits), and not all of them are gems, but you’ll find more hits than misses. And if you’re looking for a starter kit, you could do no better than our 31 Days of Horror Lists ranking, selected by Chris Coffel, Rob Hunter, Mary Beth McAndrews, Meg Shields, Anna Swanson, Jacob Trussell, and myself.

These ten Vincent Price flicks represent every kind of mood you could find yourself occupying. There are great gobs of laughs to be discovered, dark sorrowful depths to wallow within, and dreadfully frightful tombs to haunt. Whether Price is playing a reluctant hero or villain, it’s clear that he always tackled his performance with thought and heart. He was incapable of being blank before a camera. Universes were held in the twitch of his eyebrow.

Vincent Price is an icon, but while he’s probably best known for his more devilish roles (and for the opening narration on Michael Jackson’s “Thriller”), one of my favorites of his films/performances is as the last man on Earth. The great Richard Matheson adapts his own novel for its first of three screen appearances, and Price finds the humanity behind a man who sees himself — incorrectly — as a reluctant hero.

Viewers who’ve seen The Omega Man or I Am Legend know the story, but while those films chickened out on the ending, this one lands true, and it succeeds in large part due to Price’s performance. He’s lost everyone and everything and now lives a solitary life spent killing vamps and surviving the night, but when faced with a new truth, that the “monsters” have become the new norm and he, in fact, is the threat they all fear, it’s one he just can’t accept. Thrilling, thought-provoking, heartbreaking, this is a Price film worth seeking out. (Rob Hunter) Tim Burton’s Edward Scissorhands destroyed my young gothic heart and showed me the beauty of uniting horrific and romantic elements. It also introduced me to the legend himself, Vincent Price. While Price only plays a small role in the film as the Inventor who created Edward, his scenes are tender as he’s shown teaching Edward about how to be a person. His trademark voice is full of glee as he reads aloud and giggles at lines of poetry. In just a few short minutes of screentime, Price truly sells the tragedy of Edward Scissorhands. It is a small role for the actor compared to the rest of this list, yet he still imbues it with his incomparable skills as a performer. Sadly, it was also his last feature film performance before he passed away in 1993. (Mary Beth McAndrews)

House of Usher is the first of eight Edgar Allan Poe adaptations from producer/writer Roger Corman. And, yes, none of them can be called narratively faithful, but none of them can be dismissed outright either. They are a mood, a vibe, and Vincent Price commands attention in all the ones he lent his presence toward. In House of Usher, the actor goes blonde, and it’s absolutely one of his most memorable lewks. He’s dashingly alien, a sinister, sad force that roams the frame bouncing from oppressively mopey to dangerously aggressive. The only issue is that Mark Damon steals too much screen time away from Price, but if the pencil-thin phantom controlled the plot, House of Usher would feature even higher on this list. (Brad Gullickson) The Tingler is possibly one of the most absurd Vincent Price flicks. His mad doctor, Warren Chapin, has discovered an impossible creature that’s born inside any human body whenever their fear is trapped within their person, a result of being denied a cleansing scream. The parasite, a.k.a. The Tingler, escapes one patient and runs rampant on the streets, storming the very movie theater from which you, the audience member, are watching the film. Director William Castle was a man of many tricks, but planting buzzers in the seats of The Tingler’s attendees ranks amongst his very best. I’ve had the pleasure of attending one such show at the AFI in Silver Spring, Maryland, and the experience made me fall deeper and even more madly in love with Price and this film’s huckster helmsman. There’s always one more thing you can do as a creator to reach out and goose your audience. (Brad Gullickson) 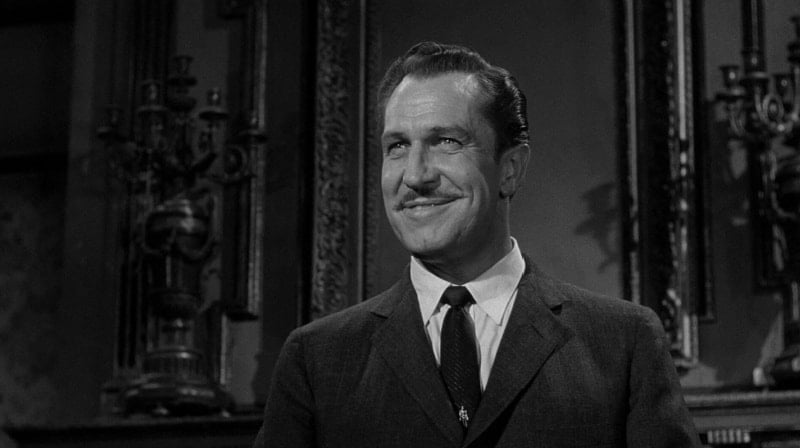 Part of what made Vincent Price such a great performer is that it was always apparent he was having fun. No film represents that more than House on Haunted Hill, with Price chewing the scenery as eccentric millionaire Frederick Loren. Price is twisted, charming, and funny as Loren. It feels like Price may have been very similar to this character in real life in many ways. Sure, he probably never killed anyone indirectly or otherwise, but he had wild parties, right? And some of them were perhaps in haunted houses, yes? That explains why Price nailed this role so perfectly. (Chris Coffel)