The ‘Midsommar’ Communal Scream and the Value of Feeling Held

Some inner demons can’t be exorcized alone. Try wailing in unison with some Swedish cult members.
By Heather Hardee · Published on August 30th, 2019

During the Hot Girl Sommar of 2019, Ari Aster’s sophomore feature, Midsommar, captured social media’s collective imagination with its disorientingly bright color palette, Coachella-esque psychedelic celebrations, flower crowns, and linen-clad Swedish ensemble cast. But between the teaser released in March and the full trailer that dropped in May, the background cacophony of women’s sobs cut through the idyllic landscape like a sacrificial knife.

Florence Pugh’s character, Dani, goes on an emotional rollercoaster while grappling with the trauma that precedes her impromptu Swedish getaway, made worse by her unsupportive boyfriend, Christian (Jack Reynor), and his anthropologist friends who originally wanted Dani to stay at home. By the end of Dani’s drug trip through the sun-soaked chaos, it’s hard not to share some of her relief at the outcome. Midsommar is endlessly meme-worthy among a certain cult following of fans because we can put ourselves in Dani’s embroidered Swedish shoes and release our own emotional baggage by proxy, especially during one particular screaming scene.

Pugh’s facial expressiveness sells the screaming sequence when Dani sees a certain Hårga ritual she wasn’t meant to witness and quickly unravels into heaving sobs, unleashing the floodgates of repressed emotion. Like Edvard Munch’s The Scream, the visceral communal screaming is a deeply upsetting representation of trauma that can no longer hide behind the facade of normalcy and politeness. Dani’s pain isn’t played for laughs; in the context of the scene the Hårga emotional hive-mind is powerful and unnerving. However, the film is self-aware about its own dark sense of humor, and audiences have connected with Dani’s uncontrollable and cathartic screaming through a lighthearted meme of that moment. As a customizable meme template, the viewer is often represented by Dani at the center while the surrounding Swedish women can be labeled as stand-ins for anything, mainly emotionally supportive (or destructive) coping mechanisms. Without text, the entire situation can be used in a literal sense to react to a horrifying scenario, which is not hard to come by in 2019. While our personal emotional turbulence is most likely not on the level depicted in Midsommar, the strange visual of reciprocal screaming into the arms of cult members can apply equally to the mundane frustrations of everyday life and existential pain worthy of a melodramatic screaming session. 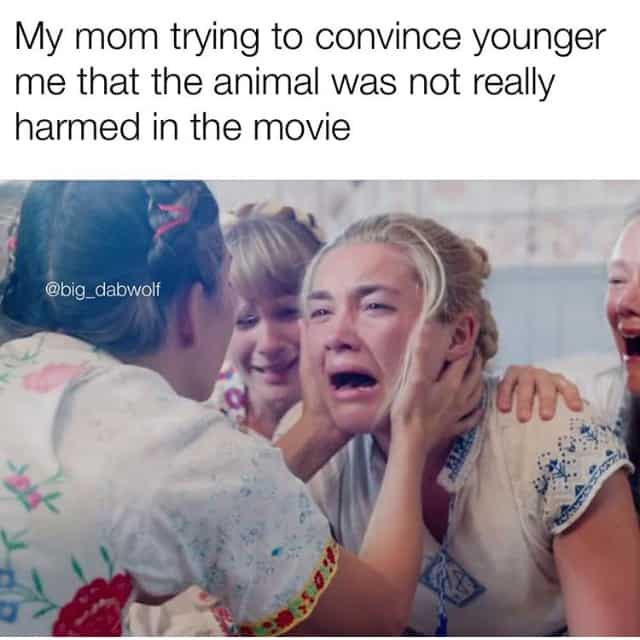 The primary reason behind the meme’s appeal has to do with some sage relationship advice given to Dani by the group’s lovable yet sinister Hårga friend Pelle (Vilhelm Blomgren): “Do you feel held by him? Does he feel like home to you?” Sympathetic screaming, even from a murderous cult, finally allows Dani to feel held by a much-needed support system and serves as an antidote to Dani’s devastating and isolating grief. In the same way that Aster has described his filmmaking process as cathartic, viral memes tend to serve a similar purpose for online communities – striking a nerve to real lived experiences and sharing the feeling with someone else. Women can be labeled as crazy and hysterical for showing such uninhibited emotion and men can be similarly stigmatized for displaying emotional vulnerability. While it’s not socially acceptable to loudly sob in public, sharing our burdens in a meme format via social media is essentially the same as metaphorically wailing in unison with others. In an anxious online culture that increasingly feels like the world is falling apart, it’s no wonder Dani’s scream has found a megaphone among those who also want to find catharsis through humor. There are some inner demons (Hail Paimon!) that cannot be exorcized on our own — they might hide in the shadows or have a psychedelic rave out in the daylight, but it helps to scream them out. Alternatively: consult a therapist, book a self-care trip to Sweden, or make a joke about it. Midsommar maneuvers the line between silliness and severity just enough for the Internet to obsess over the minutiae and run with it. A24’s tongue-in-cheek advertisement for ‘bear in a cage’ merchandise suggests the viability of Midsommar memes to tap into the film’s absurd sense of humor on a widespread level beyond social media. Although it’s too early to tell whether the memes will last into the colder months, hype surrounding the release of the director’s cut in theaters may also signal greater relevance in the long run and lasting meme potential. We can all skål to that!