The ‘In Fabric’ Trailer Promises A Spooky Descent Into Retail Horror

A24‘s newest addition to its distinguished repertoire is In Fabric, a stylish horror-comedy directed by Peter Strickland, helmer of 2014’s The Duke of Burgundy. The trendy production house released the film’s first trailer on May 29th, and it appears as though we’re in for a spooky delight, with some critics pinning it in Lynch/Argento territory. With that in mind, let’s take a look at the trailer and give it the breakdown treatment.

Right off the bat, we can see that In Fabric will make heavy use of motifs. The opening shot of the trailer is a hypnotic red spiral, revealed to be part of the display for an unassuming-looking dress shop. This kind of imagery recurs throughout the rest of the trailer, attracting the viewer’s eye and hinting at mesmerizing descent into the unknown. The film promises the sort of gauzy-looking visuals that other recent pastiches like The Love Witch have appropriated from mid-century horror. Sheila (Marianne Jean-Baptiste) finds herself in the store, searching for a dress to wear on a date that night. She finds a striking red one. The salesperson Babs (Hayley Squires), with her pitch black hair, glossy red lips, and severe eyebrows, tells Sheila that her hesitation in buying the dress will soon “be an echo in the recesses of the spheres of retail.” Sure enough, she buys it, and that’s where the trouble begins.

From what the trailer tells us, In Fabric finds horror potential in the underbelly of… the department store. There’s something to it: the artificial, too-bright lights, the omnipresent salesperson always lurking nearby, the generic music eerily reverberating from a speaker, the heavy-curtained, dimly lit dressing room. As Sheila tries on the dress at the urging of Babs, the camera is drawn to the store’s mirrors. The funhouse-style shot further below hints at the film’s sinister offering of dizzying illusions and multiple identities. 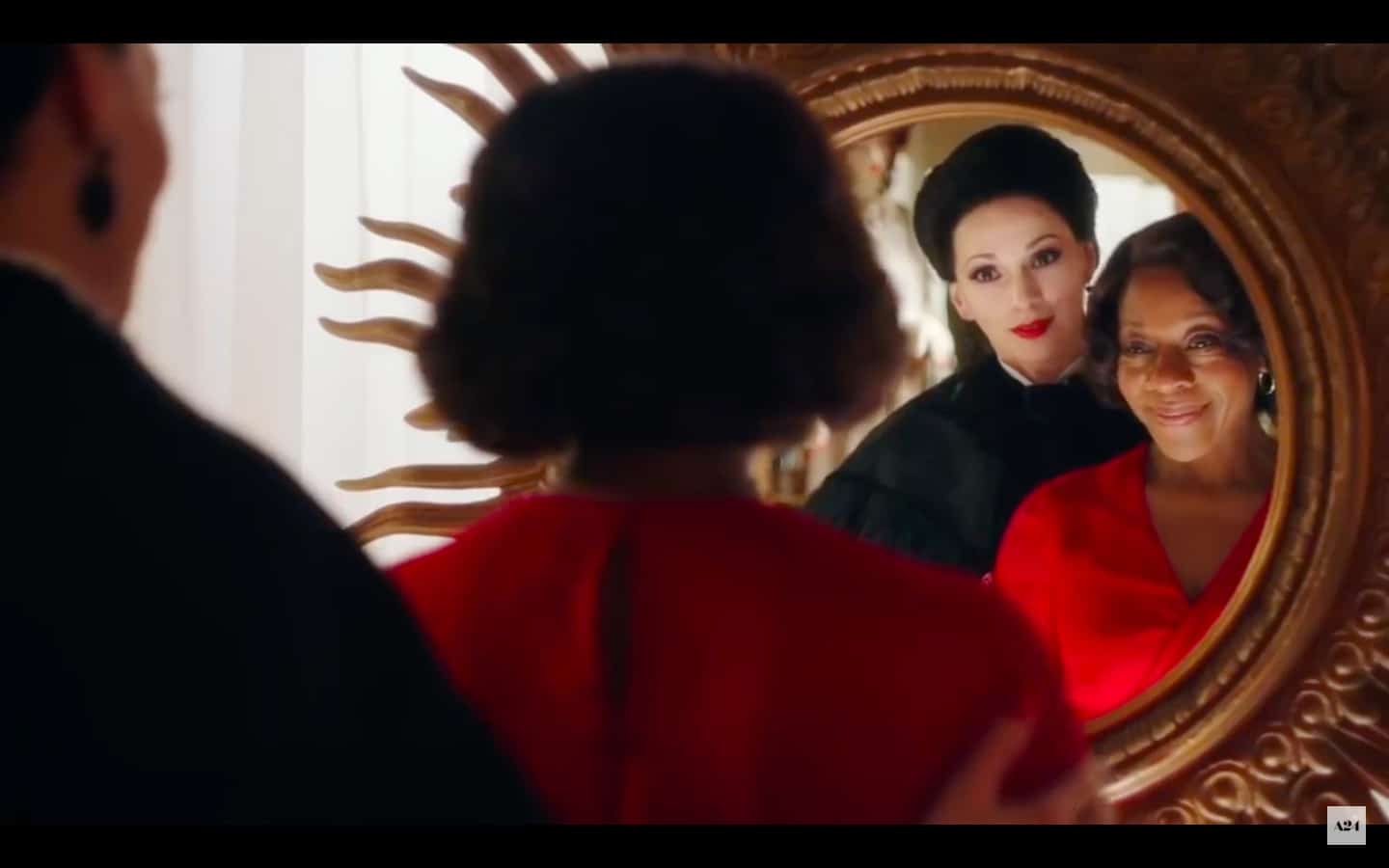 Even the language that Sheila uses to describe her new dress — “I don’t normally wear this kind of thing,” she admits — implies something forbidden about the gown choice. It’s a step outside her comfort zone, and there is something wholly vulnerable about trying on a piece of clothing that makes you feel not quite like yourself. Her date says it all once she’s there, in the dress, sitting across from him: “You look different.” We soon learn that she feels different, too.

Strange things begin to happen to Sheila. Rashes spread across her skin, her hand is injured, a dog attacks her. Her washing machine combusts, and the only thing inside it is her new red dress. A creepy inscription in its seams bears its prophecy: “You who wear it will know me.” It’s a possessed piece of fabric, but it doesn’t only fulfill its curse when being worn; the curse is in the ownership of the dress, like a haunted version of titular pants from The Sisterhood of the Traveling Pants. Sheila’s world begins its descent into that promised downward spiral. And the trailer treats us to a series of images that place this film firmly into what we’ll call retail-horror: a scissor gliding through a magazine, a mannequin melted by flames, the broken glass of a store counter, fabric fluttering creepily in the breeze, and that same motif from the trailer’s first shot, this time on fire. She buys the perfect dress, but at what cost? It’s compelling to wonder what the film might be critiquing: cult-like consumerism? Crazy department store fiends? There are a few shots that evoke the diabolical, sparking the question of whether someone is wearing that dress, and we just can’t see who it is. Perhaps each person who owns the dress weaves a dark part of their soul into its fabric, leaving it to haunt the next buyer. The trailer sparks quite a few questions (and flames) but answers none of them. One thing is certain — I won’t be heading to a department store for a while. In Fabric will be released in theatres soon, so wear your best, un-haunted dress to the cinema.