‘The Lion King’ Trailer Welcomes Us to the Pride Lands

As is now customary when one of their remakes prepares to hit the market, Disney continues perfecting the art of the teaser trailer. The latest bit of promo from the Mouse House shines a spotlight on the highly anticipated “live-action” re-imagining of The Lion King, and it is one that thoroughly appeals to our base emotions.

For multiple reasons, we’ve been primed to notice this adaptation a little more than the rest (although we’re still totally going to see Aladdin and Dumbo). Firstly, Roger Allers and Rob Minkoff’s original The Lion King was the biggest box office hit out of all the Disney Renaissance releases back in the day, grossing $968.5 million at the worldwide box office. The movie’s legacy has further spawned a successful video game of the same name, as well as one of the longest-running Tony Award-winning musicals in Broadway history.

For many enthusiasts of “Hamlet in the savanna” — and I count myself a part of that camp, with worn-out VHS tapes and hours of my childhood spent learning to play the soundtrack on the piano to show for it — The Lion King is a true testament to Disney’s ability to tell powerful and distinctive coming-of-age stories that impact audiences of all ages, in spite of their simplicity. The original works so well that with a teaser only a minute and a half long, Jon Favreau‘s redo invokes its influence by tossing together every nostalgic moment that it can. For the most part, it all meshes well together.

Watch The Lion King teaser below.

Much like Disney did with their Aladdin teaser, the Lion King trailer re-creates some of the most iconic imagery from the animated film in photorealistic glory, most prominently the Circle of Life sequence that begins the original movie. Favreau’s past experience directing Disney’s CG-infused The Jungle Book clearly shows, as well, as there’s already a discernible mix of menace and wonderment peppered throughout this early footage. Let’s break this down. Right off the bat, we’re treated to the sheer vastness of the savanna with epic wide shots of the plains. This sunrise is as memorable as the animated film’s opening musical refrains. It’s apt that the trailer immediately goes for this throwback. Close-ups are used sparingly but effectively, mostly showcasing the pristine (and frankly slightly uncanny valley) realism of the CGI. 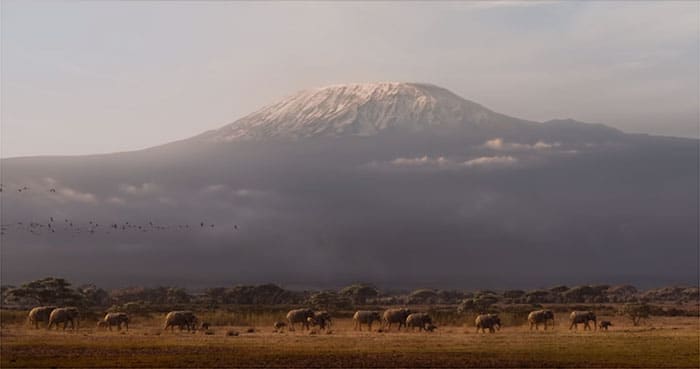 The extreme long shots are nothing short of magical, though. They reinforce the textural depth that the film is bound to have. Granted, I do mourn the loss of the vibrant hues that make the 1994 version unique. This darkness hints at a generally more ominous vibe that threads through the rest of the trailer.

Still, a plethora of animals embark on the long trek across the Pride Lands to celebrate the lion prince’s christening, and throughout their journey, a familiar voiceover lulls us into some feeling of comfort in sentimentality. “Everything the light touches is our kingdom,” says James Earl Jones, reprising his role as Mufasa, Simba’s father. Jones’ speech is basically a word-for-word copy of its 1994 counterpart. Accompanying it, nothing spells symbolism like this gorgeous shot of Simba’s tiny paw enveloped by Mufasa’s deep-set print in the dirt. It’s definitely adorable, but as aforementioned, we can’t escape the foreboding build-up that simultaneously occurs, either. And now we know why: that sure is a thinly veiled warning! This trailer insists on providing a glimpse at an especially precipitous moment of The Lion King that fans only associate with terror and tears. Couple that with Jones reciting, “One day, the sun will set on my time here,” and I’ve got inexplicable chills. When we finally get our first real look at Pride Rock itself and the recognizable vocals made popular by Lebo M. begin to reverberate across the grasslands, there’s a real sense of majesty on screen. In a proper principal character reveal, Rafiki (who will be voiced by Black Panther‘s John Kani) then crosses Pride Rock and approaches a newborn Simba. Admittedly, this was one of the more bizarre and unnerving shots to me during my first watch of the teaser and that’s all to do with Rafiki’s barely-visible eyes. But the odd animation could potentially work in this strange character’s favor. I’ll wait for more footage to drop before judging this too harshly. Especially because — finally — the cub of the hour fully appears! And Simba actually looks really cute. Notably, the animators have ensured that Simba keeps his equally shook expression compared to his 1994 appearance. Truly, no one can blame him. He’s been bestowed with way too much responsibility for a cub that’s just been born. The rest of the animals pledge fealty to the little guy. Circle of Life resounds with more punch and clarity than before. The nostalgia is overwhelming. One more look at Pride Rock, because why not? It’s magnificent. The Lion King teaser comes to a close by literally encouraging Simba (and us as audience members) to “remember…” Thankfully, this trip down memory lane genuinely looks good enough for us to remain invested, despite it rehashing what we already know from Allers and Minkoff’s film. The animation has thus far faithfully reimagined the original. It even attempts to make up for a lack of warm luminosity in its color palette with a stark attention to detail.

Of course, the trailer certainly holds back on all but two of the main characters in order to keep us intrigued about the way the rest will look and sound. Moreover, the spot largely centers on Jones’ disembodied vocal performance. The striking cast including Donald Glover, Seth Rogen, Billy Eichner, John Oliver, and Beyoncé Knowles-Carter has yet to reveal itself. I’m most interested in hearing what Chiwetel Ejiofor‘s Scar will sound like, particularly when pitted against Jones’ gravitas. Plus, there’s Florence Kasumba‘s Shenzi — the hysterical leader of Scar’s hyena posse — to look forward to.

Is it totally surprising that after The Jungle Book, Favreau seems more than capable of delivering a visually ambitious adaptation of The Lion King? Nope, and that’s a relief. Be prepared for The Lion King to hit cinemas July 19, 2019.