This article is part of our One Perfect Archive project, a series of deep dives that explore the filmmaking craft behind some of our favorite shots. In this entry, we revisit Stand By Me.

In 1986, a Stephen King novella, The Body (originally published in the Different Seasons anthology), was adapted into a feature film. This is not strange in itself — King is a prolific author, and his works have been adapted to film for decades — but while he is known as the King of Horror, this story was much more mundane.

Stand by Me, directed by Rob Reiner, is one of the best coming-of-age films ever to grace the big screen. It follows four boys’ end-of-summer adventure before they head off to junior high. They include Wil Wheaton as protagonist and narrator Gordie Lachance, River Phoenix as strong and sensitive group leader Chris Chambers, Corey Feldman as oddball Teddy Duchamp, and Jerry O’Connell as the begrudgingly included Vern Tessio.

They hear a rumor that the body of a missing boy has been seen not far from their hometown, Castle Rock. They decide that they must be the ones to find the body, and that finding and reporting it will make them town heroes. In a move that is incomprehensible by modern parenting standards, they lie to their parents about camping out in Vern’s field and disappear for almost two days to head off down the train tracks. Underneath the heartwarming quest that they undertake are some of King’s quintessential themes; death and grief underscore the journey.

When they first set out, the boys are giddy about their adventure. They sing, joke, and skip as they start down the train tracks. This walk in the woods provides a welcome distraction from their dysfunctional home lives, but it’s not long before their demons catch up with them. The first encounter with death occurs when a train comes along. Teddy stays on the tracks as the other three move clear because he wants to dodge the train. He stares down the locomotive as it approaches, and his friends don’t seem convinced that he will get out of the way in time. Teddy is furious with Chris for pulling him out of danger’s path. Chris apologizes and tells him that he can “dodge it later.”

This line is telling. Teddy will always have the chance to face down death again because death is omnipresent. The train itself returns later when the boys are halfway across a narrow bridge. This time, they do not try and stare down the train but run away screaming. They know that if it reaches them, there will be nowhere to go except for a hundred-foot drop into the river.

Throughout Stand by Me, Gordie becomes increasingly obsessed with finding this dead body. He recently lost his older brother Dennis and struggles to make sense of his grief. To lose a family member is bad enough, but to lose someone so young and vibrant seems incomprehensible to these preteens. Young people don’t die. Gordie’s obsession with finding the body represents his attempt to come to terms with the knowledge that death can always be lurking around the corner. 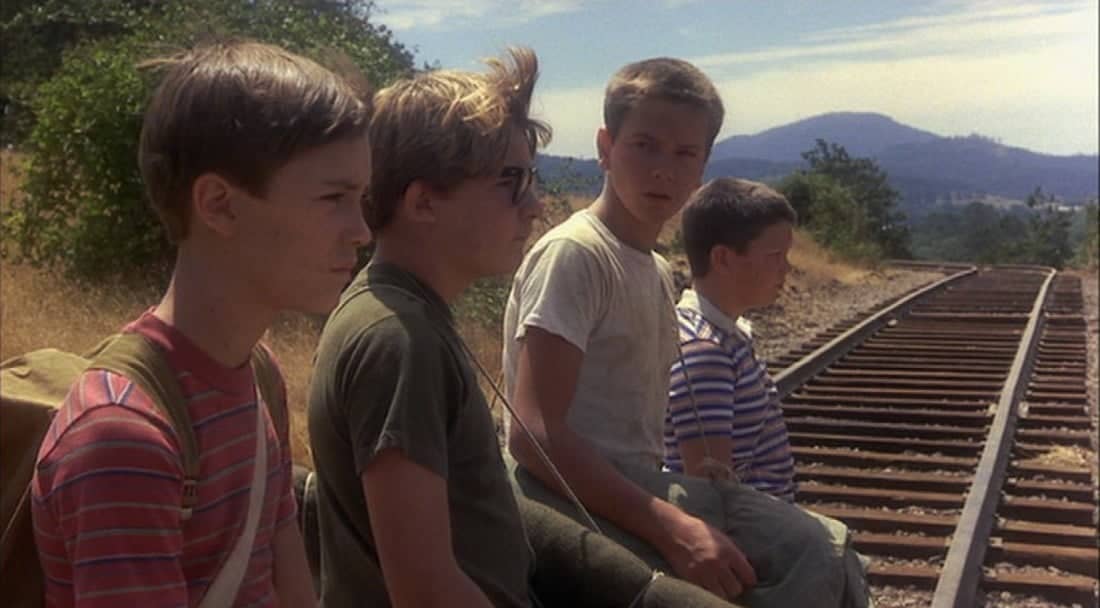 Back to Stand by Me: As the quartet get closer to the body, the boys grow more somber. During a water fight in a pond, the three other boys keep shoving each other under the water, yelling taunts of “you’re gonna die, you’re gonna die!” Gordie does not take part, because while it is a joke for the other boys, death is a reality for him. When he is buying food for the group, the shopkeeper recognizes Gordie as Dennis’ brother and quotes the Book of Common Prayer by saying, “In the midst of life we are in death.” The full quotation is fitting:

“We cannot say but that the body is dead; it is a frail, mortal, dying body, and it will be dead shortly; [. . .] it is under a sentence of death: as we say one that is condemned is a dead man. In the midst of life we are in death: be our bodies ever so strong, and healthful, and handsome, they are as good as dead.”

But when asked if he wants to turn back, Gordie replies “No. But going to see a dead kid, it shouldn’t be a party.” Despite his fears, he sees the quest through to the end. When they finally approach the body of the dead boy, each of them is stunned into silence. It is hard to find such a skilled group of child actors, but these boys made that moment one of the most iconic shots in the film. Their reactions to the tragedy seemed both unique and universal. As they stare into Ray Brower’s open eyes, they seem to come to terms with the reality of the situation. They seem to grow up in an instant. Throughout the film, Gordie talks about how “most of [his] tears were for [his] parents,” and he seems to shut down when his dead brother Dennis is mentioned.

Upon seeing Ray Brower’s body, so carelessly thrown aside by a train, Gordie finally breaks down into tears. Chris comforts him as his grief pours out over the loss of his brother and his family falling apart. He encourages Gordie to look forward to his future and his passion for storytelling. When they look death in the face, the boys realize their own selfishness. They were looking for this body for their own benefit instead of treating Brower with respect and dignity. In the end, they decide to report it anonymously to the police, not for fame but because it was the right thing to do.

The film opted for a more upbeat ending than the novella. In the book, a gang of older boys beat them up when they got back to town, and a “death-curse” was laid on the group. Gordie was the only one to live past young adulthood, as his friends perished in a series of accidents. Perhaps the most devastating of these is the only one that was included in the film; Chris managed to escape his impoverished childhood, taking college prep courses with Gordie and went on to study law. He was tragically killed when trying to stop a knife fight. He didn’t have Gordie to step up for him that time, as he did in the climax of the film, and death claimed him for its own.

Unlike his classic horror stories, The Body shows a more personal side of the King of Horror. Many of his stories draw strongly upon his own life, and in a 1986 interview with the Chicago Tribune, Reiner said that King was given a private showing of the film:

”We showed the film to Stephen King alone in a screening room, and when it was over he was pretty broken up. He excused himself for about 15 minutes. When he came back he said, ‘That’s the best film ever made out of anything I’ve written, which isn’t saying much. But you’ve really captured my story. It is autobiographical. All that was made up was the device of the hunt for the body. I was the writer,’ King said, ‘and my best friend was the guy who actually did instill the confidence in me to become a writer. And he actually was killed as a young man.'”

Despite the darker themes running throughout Stand by Me, it remains a quintessential coming-of-age tale. Each character has to face their fears and uncertainty about the future. After journeying through the wilderness and looking death in the face, they all return home stronger, tired and dirty, but quietly victorious.