“Movie House of Worship” is a regular feature spotlighting our favorite movie theaters around the world, those that are like temples of cinema catering to the most religious-like film geeks. This week, guest submitter Shannon Scott shares another one of her favorite historic theaters. Her comments are those quoted. If you’d like to suggest or submit a place you regularly worship at the altar of cinema, please email our weekend editor.

Opened: December 25, 1929, as part of The Yaarab Temple Shrine Mosque, a headquarters for the Shriners. The auditorium was originally leased to cinema mogul William Fox to be The Fox Theatre. See a timeline of the theater’s continued history through multiple closings and openings here.

No. of screens: 1, the biggest in Atlanta.

Repertory programming: The Fox is no longer primarily a movie theater, but every year the Coca-Cola Summer Film Festival presents classic cinema selections on the biggest screen in Atlanta. See below for Shannon’s note about this year’s event. 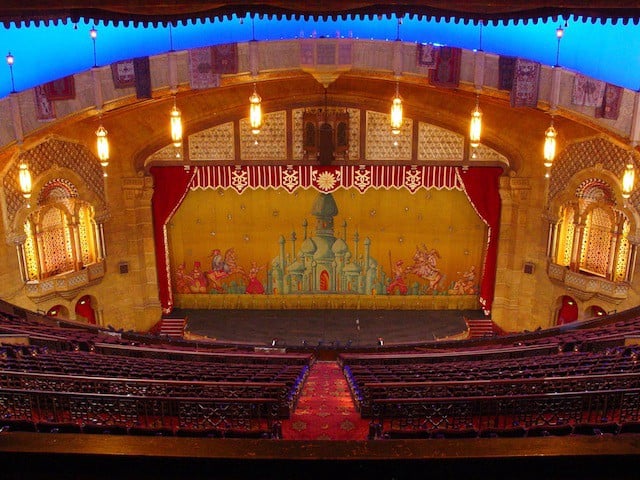 Special Events: What the Fox does primarily host these days is live concerts, ballet and Broadway shows. This weekend Chris Tucker performed, and upcoming shows include productions of the film-based musicals Beauty and the Beast, Mary Poppins, Flashdance, The Producers and Sister Act.

Why I worship here: “The first movie I saw at The Fox was Purple Rain (this was before major renovations in the mid-’80s). The theatre itself is worth the visit (and there are tours available). I have been able to see many Hollywood classics the way they were meant to be seen: Gone with the Wind, Rebecca, Casablanca, and Vertigo, to name a few. The Loge [balcony] is my favorite spot for watching movies.”

Why you should worship here: “The ambience and the big screen. Although no longer primarily a movie-theatre, it is well worth it to see movies, especially Hollywood classics, the way they were meant to be seen ‐ on the big screen. For a true Atlanta experience, this is the premiere venue to see Gone With the Wind if you have the chance. I was fortunate enough to be able to attend the 50th Anniversary of Gone with Wind at the Fox (the historic 1939 premiere of Gone With the Wind was at Loew’s Grand which was damaged by fire and demolished in 1978).

Saturday Morning Cartoons (for the little ones)

Devotion to the concessions: “Basic fare.”

Last word: “On the National Register of Historic Places, The Fabulous Fox Theatre is a beautiful movie palace in the old Hollywood tradition. Originally built as a mosque for The Yaarab Temple, a local branch of the Shriners, the opulent decor transports you to a scene from Arabian Nights.”

Shannon Scott has been a life-long film buff. She loves all things cinema, in particular French film festivals and seeing classic movies on the big screen. Although she never attended film school, she took every film class available (a total of two) while completing her degree at Georgia Tech.

Once again, if you’d like to suggest or submit a place you regularly worship at the altar of cinema, please email our weekend editor.