All That Dance in ‘All That Jazz’

The star of this musical wasn’t the music at all— it was the dance.
By Aliya Jones · Published on May 15th, 2019

By the time of his penultimate film, Bob Fosse was, in many ways, on top of the world. He had a plethora of Academy Award nominations under his belt (including a win for his second feature film, the incomparable Cabaret), he had Tonys, he had Emmys — the works! To say the least, Fosse was a name, an impressive one with expectations attached to it. So, when you’ve already accomplished so much, what do you do?

You outdo yourself. Fosse’s semi-autobiographical film All That Jazz follows the womanizing, chain-smoking, alcoholic, overworked Broadway director Joe Gideon (Roy Scheider) as he struggles to choreograph and direct his latest musical while also editing a feature film. The comparisons to Fosse are immediately evident — Fosse’s own efforts to stage his musical Chicago while editing his film Lenny forms the basis of the conflict that Gideon faces throughout the film.

But All That Jazz is much more than its story. It’s a mixture of documentary-style dancing, quick cuts, fantasies of an angel of death, touching moments told through dance, stand-up sets, large-scale musical numbers and, of course, Alka Seltzer followed by Dexedrine. As Gideon would say: it’s showtime, folks!

Fosse’s attempt to work through his own manic existence is realized through a manic film. So it makes perfect sense that the fictionalized Fosse, Gideon, works through his own existence in the only language he seems to know brilliantly: dance. These dances often come in forms not necessarily expected of a musical. They’re not just elaborate musical numbers, and they don’t always use lyrics to express our understanding of characters. In one way or another, each of the film’s dances reflects back on Gideon’s interiority to give us an understanding of this moment in his artistic existence — artistic, of course, because for Gideon, existence is artistic or it is no longer an existence.

We see this right from the start, in the film’s first instance of dancing set to George Benson’s “On Broadway.” Gideon walks around a stage full of auditioning dancers vying for his attention. His actions are almost wordless, but it’s clear that he is a genius in this realm. What he says goes, not because he is a controller, but because he’s right. He walks around his theatre with such swagger, such self-assuredness, that it quickly becomes clear that it’s his moments on the stage surrounded by dance that give him the comfort of home. Although it’s not his own dance, we come to know Gideon through dance and can count on understanding him through dance throughout the film.

In this way, dance in All That Jazz is emotional currency. The most touching dance scenes in the film are those without theatrics: Gideon practicing with his daughter, Michelle (Erzsebet Foldi); Gideon having a heart-to-heart with his ex-wife, Audrey (Leland Palmer), as she practices her routine; Michelle and Gideon’s girlfriend, Katie (Ann Reinking), performing for Gideon in an impromptu celebration. These scenes aren’t about what Gideon can do as a choreographer, they’re about who he is with those who matter most to him. He relates to them through dance, through his ability to simultaneously be their director as they dance, but their equal in their relationship. 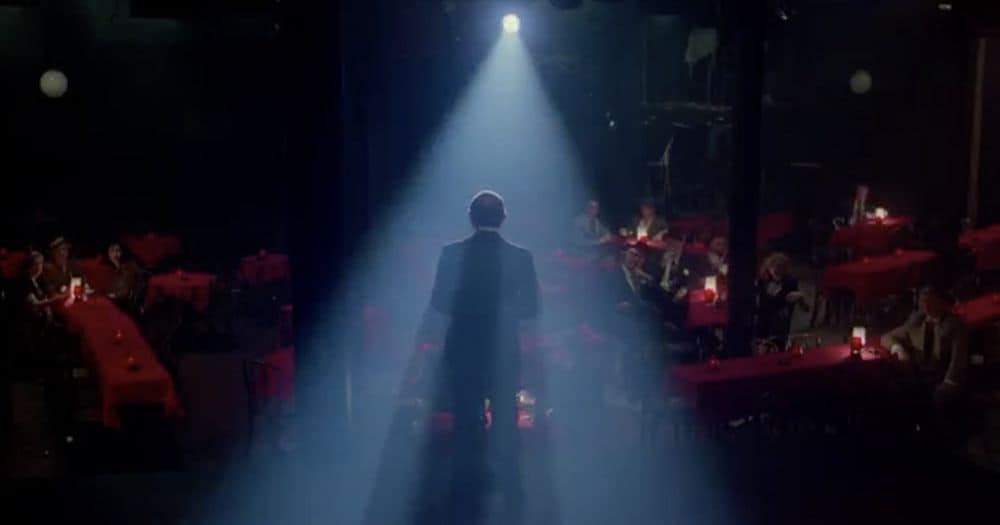 The dances Gideon shares with those closest to him are the ones that show us who Gideon is more intimately. He reveals who he is as a person in these moments framed by dance. In these moments, we can understand why people stick by Gideon. He’s often insufferable as an obsessed artist, sure, but it stems from his being a flawed person. He’s more than his obsessed exterior.

But even this isn’t the whole story of Gideon, which is something we learn as he talks to Angelique (Jessica Lange), an angel of death dressed in all white. The film periodically returns to Gideon’s fantasy with Angelique, where he confesses to the problem points in his life — his troubled familial relationships, feelings of insecurity about creating beautiful art, his flawed world view. Angelique, personifying death, is only more and more egged on by all that is withering away in Gideon.

When Gideon is rushed to the hospital with angina that could develop into a coronary, Angelique looks into the camera and lets her hair down. Much like a bride preparing to say her vows, Angelique’s time with Gideon has almost come. Despite being a manifestation of death, Angelique is ravishing. She’s alluring. She’s angelic. She begins to feel more and more present as Gideon approaches death.

Also as Gideon comes closer to meeting his end, the musical numbers become more and more theatrical. Gideon’s surgery is realized through his imagined series of numbers, “Hospital Hallucination,” which he directs while lying in bed. An elaborate medley of show tunes outfitted with bright spotlights and gorgeous showgirls, Gideon’s hallucination is his effort to understand his life. He directs Audrey, Katie, and Michelle in numbers that remind him of all the reasons he has to live.

A different type of emotional currency, imagined numbers like this one go to reveal how Gideon is reacting to plot development internally. While his discussions with Angelique are used to show how he is tempting death to take him, his imagined sequences, reveal his desires. He is thinking of Audrey, Katie, and Michelle as he begs himself to change his ways for them. He is recognizing the errors of his ways as the women in his life tell him they’re glad he’s sorry now. He is contemplating leaving a daughter behind as Michelle begs him not to go. Even in his own mind, Gideon is only able to convey honesty through his craft.

While Gideon is able to fend off Angelique while laying in his hospital bed, she has no intentions of staying away for long. The film’s last number, aptly called “Bye Bye Life,” marks Gideon’s surrender to the forces that have been attempting to capture him throughout the film. After a daily dose of drugs and alcohol and a disregard for his doctor’s warnings following his hospitalization, Angelique has come for Gideon.

This swan song is realized through the five stages of grief, repeated in the film he is editing: anger, denial, bargaining, depression, and acceptance. The sadness of Gideon’s demise is undercut by the spectacularity of his final performance “on the stage of life.” It was evident from early on that it was too late for him, that work had for too long been the entirety of his existence. It’s only fitting that if his existence is to come to an end, it should be in a spectacle.

And, of course, it is. With sequins, elaborate costumes, multi-colored lights, and an audience clapping along, the sadness of Gideon’s demise is realized only in his lyrics. A smile is plastered on his face as he exclaims, “I think I’m gonna die!” It’s not for his ability to welcome death — Gideon clearly does not want to go. But his smile is for the dance of it all. He runs through the crowd, saying goodbye to those he loves among the cheers. Angelique looks on but doesn’t dare attempt to take him early from his final performance.

Gideon’s ability to say goodbye through his craft, his preferred method for saying anything at all, feels appropriate. Though he was flirting with death throughout the film, he arrives to her, in some ways, on his own terms. His death is a tragic yet expected one. But his memory as a character is marked as much by his elaborate and fitting musical number as it is by the zipping of his body bag.