Here’s a list of cinematic women who can and will kill you with their legs.
By Monika Bartyzel · Published on October 23rd, 2014

The scene starts out typically enough. An exhausted, blood-covered man jumps into a car and peels out of the area with a prone, bloodied female body lying in the back seat. As he drives away, however, she watches. Before he can notice the change, she’s turned around, raised her legs, and wrapped them around his neck.

He crashes and is knocked unconscious. With her hands cuffed behind her back she crawls to the front, kicks out the windshield, grabs an envelope with her teeth, and wiggles her way out. She isn’t impervious to pain. When she falls to the ground she cries out, but pulls herself to her feet and wobbles off, kicking off her remaining stiletto to run away.

When Gary Oldman drove off with Lena Olin in the back of the car in Romeo is Bleeding, the incomparable actress revealed the joys of female evil and the potential inherent in leg-based violence. The male gaze, quite atypically, merges with feminism in moments like hers. There is a sexual element of provocation mixed with a feminine release as she attacks with the very body part that differentiates her. The usual source of attack is now the weapon. It’s titillating, it’s cathartic, and it doesn’t need vagina dentata to happen.

Nothing else quite compares to Olin’s wildly vicious Mona Demarkov, but many women have come close, playing on the leg’s inherent power of vice grips, vessels, and even automatic weapons begging to be provoked.

The James Bond screenwriters must’ve been delighting in Olin when they created Xenia Onatopp for Goldeneye. Famke Janssen’s sexy villain not only vaguely resembles the Swedish actress, she also channels her same glee. One minute, Pierce Brosnan’s Bond is laying on the ground, the next, Xenia descends upon him, kicking him, grabbing him, and purring: “This time, Mr. Bond, the pleasure will be all mine.” She licks him and squeezes with her thighs, laughing just like Mona, but she faced the unstoppable 007 instead of Oldman’s mess of a cop, and the moment would be her last.

Leg warfare often adds a sense of reality to the proceedings, as women use flexibility to their advantage, but with Gina Carano, an ex-MMA fighter shooting a scene without a score to manipulate the tension in Steven Soderbergh’s Haywire, the prowess feels even more real. She punches, kicks and spars with Michael Fassbender, neither of them gaining the upper hand until she kicks him through a door.

He tries to emotionally manipulate her, and she doesn’t bite. She keeps fighting, ultimately wrapping her legs around his neck and cutting his air supply until he loses consciousness. While he’s delirious, she shoots him dead. There is no glee; just cold, calculated skill.

Mystique might not be the creative result to one woman’s fighting experience like Haywire, but her character gets to do the most varied and interesting things with her legs, whether she’s played by Rebecca Romijn or Jennifer Lawrence. She pins, smacks and kicks with ease.

She even flips to and fro, uses her legs to poke through her cell and take out a guard, procure his keys and free herself. Her legs aren’t those of a regular woman. They spin and work just as seamlessly as her arms and make her into a smoothly lethal human death star.

If there’s one overarching theme in Quentin Tarantino and Robert Rodriguez’s grindhouse double bill, it’s that there’s nothing more memorable, or deadly, than the female leg. In Tarantino’s installment Death Proof, Rosario Dawson, Tracy Thorns and Zoe Bell are women joyriding in a 1970 Dodge Challenger R/T (with Bell hanging onto the hood) when they come across murderer Stuntman Mike (Kurt Russell). He fails to kill them, so they pull him out of his car and repeatedly punch him until Bell roundkicks him to the ground and Dawson unleashes the death blow (just like Mae Whitman would try years later in Scott Pilgrim) – one swift heel to the head. It isn’t fancy; just efficient.

The fanciness is saved for Rose McGowan’s Cherry Darling in Planet Terror. She loses a leg only to gain a better one – a machine gun with a preternatural ability to know exactly when to shoot. Instead of thigh squeezing or high kicks, her deadly wrath is one iconic prosthetic that overshadows the rest of the film – even Bruce Willis.

Isabella Rossellini, The Saddest Music in the World 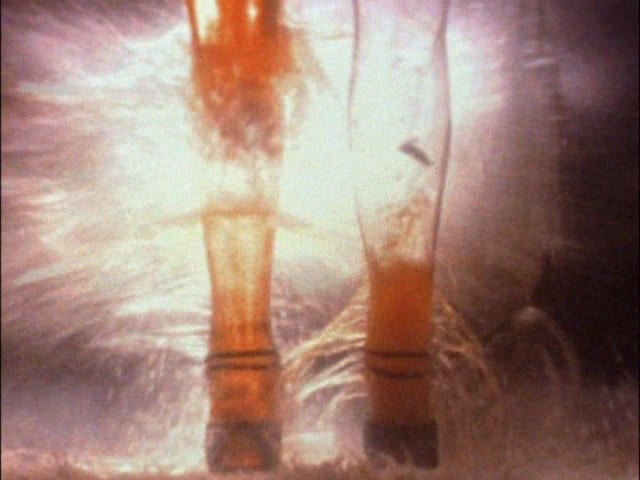 Where Cherry is only missing one leg, Isabella Rossellini’s Lady Helen Port-Huntley is missing two – after a car accident, drunken buffoon Fyodor Kent cuts off her good leg before her compromised leg. Years later, during her sad music competition, son Chester (Mark McKinney) plays as she stands before her crowds in glorious glass legs filled with beer. But the Kent family is a curse on her body, and Chester’s music cracks them open until she falls to the ground.

He tries to smooth over the situation, but there’s not much sympathy left for you when you’re involved with a woman’s leg destruction not once, but twice. Lady Port-Huntley stabs him, repeatedly, with a remnant of her glass leg and finally has her revenge.

It’s a pity Aeon Flux did so poorly, because it used Charlize Theron as a female superhero assassin, it was directed by a woman and most of all, Aeon’s fighting moves are really, really cool. Much like Mystique, she moves, bends and uses all appendages with ease – especially when killing henchmen.

The montage of her kills reveals a character who employs many techniques. Her death-by-thighs is swift and effective, and only beat by her ability to flip on her hands and use the power of her legs to quickly bring a man down. She even kills with a shard of glass, but sadly, all that skill couldn’t defeat critics and the box office.