So many frames of Robert Eggers’ The Witch are obstructed by trees. Thickets of weather-beaten branches create a natural, prickly shell for its characters to maneuver, to get lost in, and to avoid altogether. So, too, is how Eggers structures this horrific folktale. Laying a blanket of dread across the bodies of his characters, the New England plain crawls with the demons of the wood to terrify a Christian family cast out from their plantation. “We will conquer this wilderness,” William, the patriarch of the family says to his son, Caleb. “It will not consume us.”

With a thick atmosphere and historic context down to the characters’ vernacular, Eggers conjures for the screen a most terrifying examination of the fears of the female body, told under the guise of possession, witchcraft, and religious sanctimony. When William, Katherine, and their children Caleb, twins Mercy and Jonas, and eldest daughter Thomasin are cast out from their community, it is to the wilderness they flee. Roughly a year later, baby Samuel is born and circumstances turn wicked. When Samuel goes missing under Thomasin’s watch, it is she, the eldest daughter, who is blamed for the baby’s disappearance and death. This event and a missing treasured cup that belonged to Katherine leads Thomasin to be the target of torment from her family. Constantly gazed at from the periphery of her family members, Thomasin is making her transition into womanhood while the small plantation her family has created succumbs to unnatural horror. 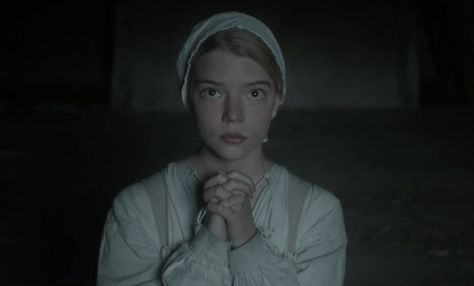 All the while, Thomasin is seen as the cause of the varying evils befalling the family. There’s a fear her siblings and parents harbor over her. One night in conversation, Katherine beseeches William to give Thomasin to another family, noting that the girl is growing into her “womanhood.” Simultaneously, Caleb becomes fixated on Thomasin’s developing body. No longer a girl the likes of Mercy, Thomasin’s physique is more the like of a gamine; small, slender, and yet tempting to wandering eyes. It’s this fear of Thomasin that almost becomes far more persistent than the fear of the unknown specter in the woods.

Thomasin becomes further and further othered and demonized by her family while bearing the most purity compared to a jealous mother, lying father, conniving twins, and prideful brother. It’s these small gestures and movements, even subtle gazes, through which Eggers directs his cast to convey these deeper sentiments of fear and horror. As audiences first see Thomasin at the beginning of the film, the eldest daughter of William and Katherine gazes upward, her white skin serene and untouched by neither nature nor toil; she is pure. But that image of Thomasin, nearly angelic, is knocked down time and again by the superstitions of her family and the baseless claims of her siblings. Beneath the layers of wool and shift, there is something far more carnal and reactionary to this historic settler’s tale.

There is a fear of the female body, and that fear must be contained. The Witch incites this reading as Katherine and William bicker about what to do with Thomasin, which family to send her to. But as their daughter lives in this moment of change, she becomes the target of their torment and is made to be the villain by her family. She is to blame for the disappearance of the cup, Samuel, and then the events that follow, including Caleb’s possession and subsequent death. Much like the angelic image we see at the beginning of the film, we know Thomasin’s own purity is true and that she holds the least amount of threat to her family. But it is because of Thomasin’s positionality in her life that she is made a threat by her family. Her adolescence becomes a crutch her family uses to turn against and belay any logic the eldest daughter offers. With the ridicule and abject torment she endures, it is no wonder that Thomasin turns to the Devil to finally live instead of merely existing as her family deems.

By the end of the film, Eggers embraces Thomasin’s freedom and agency, allowing her to “live deliciously” while her family who sought her out to be a witch either die or vanish. Though the film is set during the settlement of New England as the Colonies began to form and many left England for fear of religious persecution, The Witch still holds a strong grasp on contemporary issues. Instead of feeling comfortable with Thomasin embracing her change, her family gaslights her and believes her to be the cause of all the wickedness in their home; she is bringing these things upon them.

When confronting Black Philip, the demonic goat with whom the twins were in commune, audiences lay their gaze on a different young woman. Thomasin is changed. She is spattered with blood, her hair is no longer covered, and her shift is removed. She is freed of the burden and torment of her family and patriarchal institution — she is set free. In the end, Thomasin ventures back into the thickness of the woods, but there is a clearing now. Thomasin embraces the darkness and audiences finally come to fear the witch, the horror of her family’s making.

An entertainment writer, with work featured in multiple places. Loves movies and television almost as much as her cat.