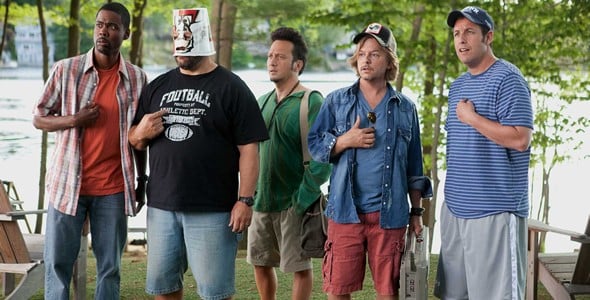 There’s a time machine quality to almost everything in Grown Ups. After all, it’s been twenty years of almost constant career exposure (at one level or another) for the main comedians on display here. We’ve had the privilege and the horror of seeing them go from young rebels to father figures, and that feeling is inescapable as they complain about the aches and pains of middle age and the tired schtick of men escaping their wives and responsibilities to grab a bucket of chicken and some beer. In the film itself, the theme is alive and well in the transformative power of a nostalgic place of youth – a simple place where all the lessons of adolescence are taught.Coach Buzzer (Blake Clark), an influential Junior High Basketball coach, has died. His championship team of 1978 gets together for the first time in a long time to reconnect and celebrate the life of a great man at the same lake house where they celebrated victory 30 years before. Lenny Feder (Adam Sandler) is an important Hollywood agent whose wife Roxanne (Salma Hayek Pinault) is a clothing designer. Eric Lamonsoff (Kevin James) is a furniture store manager with a wife (Maria Bello) who still breast feeds their 4-year old son. Kurt McKenzie (Chris Rock) is a house husband who loves cooking shows and getting generally shit on by his wife Deanne (Maya Rudolph). Marcus Higgins (David Spade) is still single and still obsessed with sex. Rob Hilliard (Rob Schneider) is a new age mess who’s married to a woman twice his age named Gloria (Joyce Van Patten).

That list of names is essentially the plot. There are minor problems that crop up, especially in the beginning when the kids aren’t having fun without the internet and video games, but that’s taken care of when Lenny drags them all outside (a strange commentary considering Sandler produced the video game-obsessed movie Grandma’s Boy just 4 years ago). The sitcom style relationship flair ups are all about as meaningless as the basketball rematch that the townies so desperately want to set up. In fact, a similar script with different talent resembles something that National Lampoon would put out straight to DVD.

None of that is necessarily bad – the film has every right not to get too real – but 5 men playing the dozens for an hour and half doesn’t make a movie.

The bulk of the film jumps between the physical comedy of Kevin James falling down and Apatow-esque one-liner fests where each comedian locks on to a topic and attempts to beat the funny right out of it. The result is some good lines but an overall feeling that when the cameras stared rolling, director Dennis Dugan said, “Okay, guys. Now make fun of Rob Schneider’s hair,” and the crew didn’t stop tape for half an hour. It all feels like the hunt and peck method of comedy. Say enough things, and you’re sure to get something good for the edit.

With all the talent on screen, the movie is about as refreshing as a glass of water when there’s a big jug of lemonade within reach. It’s not that it won’t draw out some laughs – it definitely does that – but with no kind of story to hang the jokes on, the audience is held hostage in a cabin in a woods with everyone wondering when it will all end. The crew seems like a fun one to hang out with, but spending the whole weekend with them feels awkward.

The only direct complaints I have about the comedy itself is that they cannot let go of the gags and they do too many old mainstays. Long after breast feeding, Grandma’s bunions, and Gloria’s old age are funny – the puns just keep on coming like a swarm of Off-resistant mosquitoes. However, those one-liners seem like a vacation as soon as the movie cuts to the slo-mo, wind blowing against the scantily clad hot girl while the middle-aged farts stare at her. Great for eye candy, but that gag was old back when animated Looney Tunes wolves were doing it.

On the other hand, if the jokes were meant to thematically mirror the creaking physicality of middle age, I’ll take all the negative things I’ve said back.

It’s full of summer iconography – the lake house, heading out to the water park, mosquito puns – but the core message of the film is self-injuringly true: I would have been better off going outside to skip rocks than stay indoors and watch this movie.

The Downside: A lot of tedium and tired jokes, a desert of plot that doesn’t help the constant barrage of the same jokes.

On the Side: Norm MacDonald has a great cameo involving a water slide.