Actor and makeup artist Lon Chaney Sr. crafted one of the most famous moments of the silent era. Here’s how he did it.
By Meg Shields · Published on February 28th, 2020

This entire column is based around the celebration of cinematic techniques that read as magic tricks. In this context: Lon Chaney Sr. is a veritable magician.

An Old Hollywood powerhouse known for his characterizations of unnerving individuals and mangled souls, Leonidas Chaney was born on April Fool’s Day in 1883 to two deaf parents. As Chaney himself explains in a rare interview in Movie Weekly, the unique circumstances of his upbringing meant that, for the actor, “gesture was always a thing of great significance.” A Silent Era performer, Chaney’s physical deftness resulted in emotionally rich, peerless performances that still resonate and shock almost a century later.

In addition to being one of the most evocative performers to ever grace the screen, Chaney was a pioneer of early cinematic special effects makeup. With few exceptions, his best-known characters experience some sort of disfigurement, and the actor took the execution of these mutilations into his own hands, often at the expense of his own comfort and safety (more on that later). From murderous madmen to misunderstood monsters, Chaney consistently elicits bi-tones of repulsion and empathy, curiosity and fear, horror and pity. Gnashing teeth, curling lips, flaring nostrils, his characters are always as upsetting as they are mesmerizing.

A big part of why Chaney’s creature designs are so affecting is because, as horror director Jennifer Kent articulates in an interview with Mountain Xpress: “You can see that it’s a person’s face. It’s just a face that’s been distorted — without CGI obviously — but manipulated so that it looks human, but almost not.” Nowhere else is Chaney’s unique quality of “human, but almost not” more evident than in the disfigured ghoul of 1925’s Phantom of the Opera, one of Chaney’s most impressive make-up jobs, if not certainly his most famous one.

The unmasking of the titular Phantom is one of the most well-known moments in silent film. Arguably, it’s one of the most horrifying images ever put on screen. As the mysterious Eric sits at his organ, our captured heroine Christine loosens his mask. As contemporary reviewer Carl Sandburg puts it: “Her fingers give one final twitch — and there you are!”

The reveal: a defacement more horrifying than any other cinematic iteration of the infamous Opera Ghost to date. His nose is an upturned chip, his mouth a mangled mess, his eyes threatening to pop. It’s hard to wrap your head around: how can that thing be human? This furious, menacing, despair-filled creature? Part command, part challenge, the Phantom shrieks:  “Feast your eyes, glut your soul, on my accursed ugliness!”

By mangling Lon Chaney’s face with wires. Plus some good old fashioned contouring.

In a rare statement on his craft, Chaney explained, as cited by film historian Scott MacQueen in the October 1989 edition of American Cinematographer: “I’m supposed to have evolved some magic process of malforming my features and limbs. It’s an art, not magic…I achieved the Death’s head of that role without wearing a mask.”

Indeed, to pull off the ghoulish look of the Phantom, Chaney undertook a variety of creative if woefully self-harming illusory techniques.

To become a living skull, Chaney raised the contours of his cheekbones with cotton and collodion, a very flammable and syrupy solution of pyroxylin mixed in alcohol that creates the appearance of scarred skin when dried. He flattened (possibly glued) his ears to his head, adding to the skull look. An exaggerated skullcap was used to elevate Chaney’s forehead by several inches, accentuating the bald dome of the Phantom’s skull, draped by flat-pressed wisps of stringy black hair. Pencil lines were used not only to exaggerate the natural creases of Chaney’s brow but also to hide the lip of his bald cap. In the same quote cited in the American Cinematographer article, Chaney continues: “it was the use of paints in the right shades and the right places — not the obvious parts of the face — which gave the complete illusion of horror. My experiments as a stage manager, which were wide and varied before I jumped into films, taught me much about lighting effects on the actor’s face and the minor tricks of deception. It’s all a matter of combining paints and lights to form the right illusion.”

Taking the color palette of André Castaigne’s illustrations as his reference, Chaney painted his outer eye black, adding stark white highlights around the periphery to emphasize the skeletal effect and suggest the transition from bone to sockets.  The Phantom’s toothy grin was accomplished by attaching prongs (yes prongs) to a serrated, rotting pair of false teeth; creating a gnarled grin with a mouth held wide by design. Chaney further distorted his lips and shaded his face with greasepaint.

The nose is the worst part. Chaney applied putty to sharpen the angle and inserted two loops of wire into his nostrils (which were themselves darkened with black eyeliner) to make a skeletal shape. Extra wires concealed under putty and the skullcap were attached to Chaney’s nose, yanking the actor’s nostrils upward.

There are some who have stated that in certain shots Chaney manipulated his nose with spirit gum and fish skin. But given that the reports have been contested and imitations have not been successful, we must take these claims with a grain of salt.

There is also a dangerous myth floating about that Chaney put egg membranes in his eyes to give them a cloudy look. This rumor appears to be a combination of two facts: Chaney messing his sight up with the false eye cover from The Hunchback of Notre Dame (1923) and the white-out cosmetic contact lens he had personally created for 1926’s Road to Mandalay (one of the first full-eye scleral white glass contact lenses made for theatrical use). In any case, the egg membrane tidbit is likely an exaggeration if not an outright falsehood.

And really, who needs to exaggerate when it comes to Chaney? “He suffered, you know,” recalls Phantom’s director of photography, Charles Van Enger, as cited by the ever-giving American Cinematography. “Sometimes [Chaney’s nose] would bleed like hell. We never stopped shooting. He would suffer with it.”

This was still early days in cinema history, so when we’re talking about the innovative shenanigans on display in Phantom of the Opera, the only real precedent in Hollywood was Chaney himself.

In the aforementioned interview in Movie Weekly, Chaney explains: “Most of my roles have carried the theme of self-sacrifice or renunciation. These are the stories I wish to do.” Self-sacrifice was certainly the name of the game when it came to Chaney’s approach to make-up.

Two years before Phantom of the Opera, Chaney designed an affecting but physically-demanding guise for Quasimodo in Hunchback: fitting himself with an external glass eye, a 20-pound plaster hump, and a painful harness that fixed his shoulder to his hip to achieve the desired effect. With humble innovations and the spirit of Occam’s Razor, you can’t discount the impact of Chaney’s make up kit (a fisherman’s tackle box, today a part of the collection at the Natural History Museum in Los Angeles). 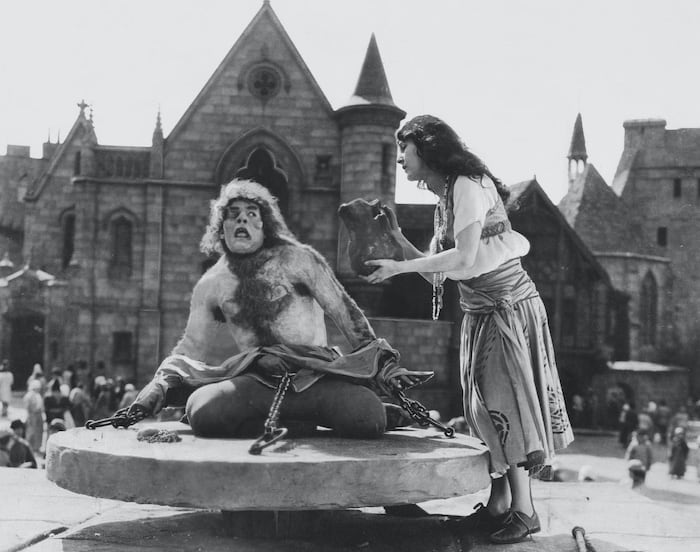 That said, without fail, the best creature performances are the ones where the actor wears the makeup rather than the makeup wearing the actor. Doug Jones (Pan’s Labyrinth, Hell Boy, Star Trek: Discovery) is the highest-profile example of a modern performer who can play creature effects like an instrument. Like Chaney, Jones’ embodiment and the makeup he wears consistently come together for performances that are more than the sum of their parts. Andy Serkis is another great example of this, though the added twist of digital space and all the post-production collaboration that entails, is a wrinkle best smoothed out some other time.

It would be easy (and delightful) to sit here all day listing evocative makeup performances (Jeff Goldblum in The Fly…Fredric March in Dr. Jekyll and Mr. Hyde…Warwick Davis in everything…). But, ultimately, Chaney brings something unparalleled to the table: the man did his own goddamn makeup.

The impact of this bespoke quality is elusive but you can’t help but feel it when you watch Chaney perform. He had an intimate knowledge of his own body, both as an actor and as a makeup artist. He knew its abilities, its limitations, and how to weaponize both through the use of self-designed, tailor-made practical effects. The result is up there on the screen, in creatures like the Phantom who to this day remain unparalleled in both their spectacle and their sympathy.

Related Topics: How'd They Do That?, Phantom of the Opera, Special Effects