Now that you’ve watched the Last Jedi trailer one billion times, let’s learn a little about one of the weirder byproducts of the Star Wars saga.

For best results: listen while reading.

Nowadays, you can find alternate universes in which Voldemort is in an amorous relationship with Pikachu, Sherlock Holmes is a cannibal, and Dora the Explorer has taken on the role of Rambo. These three examples of fanfic are par for the course in 2017. In the post-modern world, it would be strange to have super fans of pop culture not carry on the narratives built by the original creators. However, things were much different 40 years ago, when a truly groundbreaking work of fanfic was created.

NOTE: I am using fanfic in a very broad sense. A few other terms that may fit more closely to what I’m talking about are “Filk” (songs about specific source material) or musical “Bandom” (fanfic centering on particular bands). However, neither of these terms totally works to classify what I am discussing. The A-side of Meco’s 1977 album Star Wars and Other Galactic Funk is not about the Star Wars soundtrack it is the Star Wars soundtrack, so “Filk” doesn’t really work. Additionally, the album is not about John Williams, so “Bandom” isn’t accurate either. The album feels more akin to the genre of fan fiction rather than to the nebulous attribution of fandom or the acute specificity of “Filk” or “Bandom.” Feel free to replace fanfic with any word you find appropriate.

Star Wars and Other Galactic Funk was the creation (or re-creation?) of a New York record producer called Meco. The album’s A-side consists of a fifteen-minute Disco medley of John Williams’s Star Wars score, while the B-side consists of music inspired by Williams’s score. Meco’s creation and its subsequent success paved the way for super fans to have a space to create art inspired by pop culture.

Born Domenico Monardo in 1939, Meco learned to sight-read music before learning to play an instrument. This practice, called Solfeggio, stemmed from his father’s Italian heritage. After attending Eastman School of Music and serving in the West Point Band, he landed in New York City soon becoming a studio trombone player. His specialty was pop trombone performance (yeah, baby), but he soon transitioned to arranging. By 1977, Meco had worked his way up to the role of producer.

Alongside Meco’s growth as a record producer, he was also a self-described sci-fi super fan (the most common prerequisite for fanfic writers). The producer ravenously consumed sci-fi novels in high school (citing Edgar Rice Burroughs as a hero), and he attended every sci-fi film release without prejudice. That’s how he found himself walking from his midtown apartment to a downtown theater on May 25, 1977.

He attended Star Wars on opening day simply as a sci-fi fan, but he left the showing as a Star Wars fanatic. That weekend Meco saw the film four times. But it wasn’t until his second viewing that he heard John Williams’s score—he was taken by the characters and plot initially. The score was secondary. This sequence of events is important to the fanfic theory because fanfic is tied to the characters rather than the medium. Meco used his medium of choice (an album) to tell an alternate story of the characters the film Star Wars had originated. Luke, Leia, and the gang existed in our universe where Disco (not late-Romantic classical) music was the idiom of the time.

While Meco’s album was one of the first forays into fanfic in the Blockbuster era, remix culture (the foundation on which fanfic rests) was already hundreds of years old. Dr. Henry Jenkins, known for his book Convergence Culture, theorized that American art since the 1800s was a “mixing, matching, and merging,” of multiple artistic traditions. This form of art in the 1800s was mostly restricted to visual media. However, with the emergence of recording technology in the late 19th century, remix culture spilled into auditory media.

Since the birth of popular American music, covering songs that were previously recorded by other artists was commonplace. Songs from film and Broadway musical soundtracks had a history of being re-recorded by pop groups, often widening the song’s appeal. One such film-by-way-of-Broadway track was ‘Till There was You which was originally written for the musical The Music Man and was re-recorded by many pop artists including The Beatles. 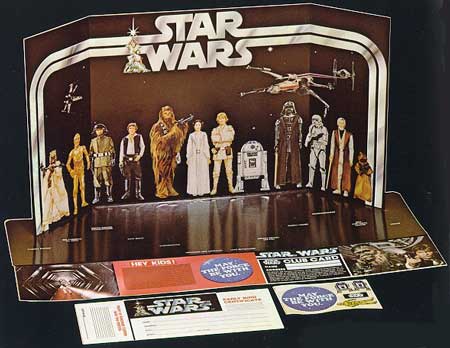 What differentiates Meco from those who came before him is that he re-recorded an instrumental and sent it to number one on the Billboard pop charts. The song’s success can be attributed to many factors. First, and most obviously, Star Wars was the biggest film of the year. Any product associated with the film would find success. I mean, look at the triumph of the empty box campaign of 1977 in which parents bought their children a box with Star Wars action figures on the front and nothing inside. Sure, the kids got their toys in 1978, but still.

Second, Meco was savvy enough to pair the hype of the film with the biggest musical fad of the time: Disco. Star Wars wasn’t the only mega-hit of 1977. Saturday Night Fever would be released two months after Meco’s smash album. Not to detract from how bizarrely fun Other Galactic Funk really is, but the nightclub-going public was at the height of their Disco obsession, which added to the album’s popularity. The album received a Grammy nomination for Best Instrumental Performance in 1978. But the cover was beaten by John Williams’s original score. As a consolation, Meco received a poster of his Other Galactic Funk album art with a note from Williams reading, “Dear Meco: You’re my Grammy winner.”

After the success of Other Galactic Funk, Meco signed a deal with the Robert Stigwood Organization, whose biggest clients were the Bee Gees (writers of the Saturday Night Fever soundtrack). The record company’s move to sign Meco is indicative of how big this record really was. Over the next fifteen years, the producer would record re-imaginings of Empire Strikes Back, Close Encounters of the Third Kind, and many other soundtracks.

Meco’s work to bring the Star Wars soundtrack to pop music acted as an interesting bridge between professional and fan. Due to the commercialization of music, musicians are placed above those who simply are fans (in modern day terms “consumers of music”). By interacting with John Williams in the way he did, Meco acted as both ordinary fan (by caring so much for the score to re-record it in the first place) and musical peer (by receiving a Grammy nomination for his work).

Since Meco’s number one record, other record producers have ventured into the Star Wars galaxy to create their own fanfic. One such musician is Rick Rubin, founder of Def Jam Recordings, who was just getting his record label off the ground a year after Return of the Jedi was released in 1983. I’m sure Rubin would have loved to remix the ROTJ soundtrack with a hip-hop backbone in 1984, but the moment had passed by the time Def Jam was in a position to record such an album. Rubin would not play in the galaxy far, far away until 2016 with the album Star Wars Headspace. The album transformed Star Wars sound effect samples (not Williams’s score) into electronic music (since Meco’s remixes were released, John Williams has forbidden any record label from remixing his scores).

Nowadays, you can go on Soundcloud, type in Star Wars along with any genre you want, and you’ll probably find at least a few Star Wars songs in said style. This is due in large part to the recent democratization of recording technology. In 1977, only those with access to incredibly expensive recording equipment could produce professional-quality orchestrations. The proliferation of fan-made music is also due, in part, to the man that started it all. Meco originated musical fanfic, for that we should all give him one of those cool, lazy Han Solo salutes.

Currently on the lam from three California public library systems.