Delve into the mind of Hideaki Anno with images from one of the most iconic anime of all-time.
By Max Covill · Published on June 19th, 2019 There was gore in Evangelion before this shot, but I love how excessive it is. Everything is almost monotone with the grays and blacks, but then you have this very excessive blood just oozing out of the angel. One of the few times we see Yui Ikari in the series. This image also gives us some idea that when Yui disappeared, she disappeared into EVA Unit 01. When EVA Unit 01 goes berserk, it’s because Yui is doing everything she can to protect her child. This image almost has an ethereal quality to it. Gruesome. It wasn’t enough that EVA Unit 01 absolutely destroyed it’s foe, but then came when it crushed the plug. That plug contained the body of an EVA pilot and he’s just lucky he wasn’t killed in that instance. An angel is trying to assimilate with Rei, taking over her EVA and her mind. This image takes place in Rei’s mind as the angel is weaving its way through her defenses. The strong primary colors really make this sequence stand out. The first time Shinji meets Kaworu is by the water overlooking the decimated Tokyo-3. There isn’t much time to learn about Kaworu and his interactions with Shinji, but here with this view, we get a lot of information about what makes Kaworu tick. It doesn’t hurt that the view has this pervasive beauty about it, even if everything was destroyed. The finale. This image brings about a lot of feelings for Evangelion viewers. Either disappointment at the way everything unfolded or satisfaction to have reached the end. We get all the primary characters celebrating Shinji as he takes a final bow. There is a lot going on with this image. In fact, the fate of humanity rests on the decision Shinji makes here. Not to mention the precious seconds that we sit waiting for that ultimate decision to be made. It lulls you into complacency before revealing the fate of the universe. 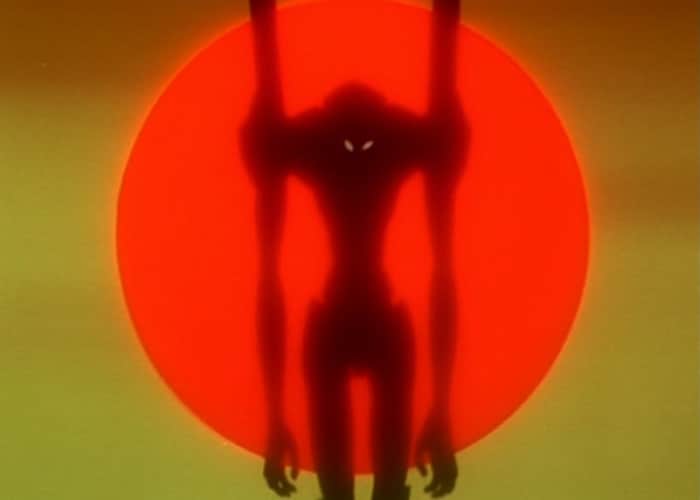 Nothing says symbolism like this shot of EVA Unit 03 against the red sun sky. If you believed that this show was fun and games before, this is the moment when everything went to hell. It is an image that is scorched into viewers’ minds as the violence takes holds. If you are thinking of images from Neon Genesis Evangelion, this is the one that comes to mind.