The Mandalorian is over, and waiting for Season 2 to arrive is going to suck. In an age when Star Wars’ cinematic releases have become bloated and divisive, the lowkey nature of the Disney+ series marked a welcome change of pace for the franchise. Short, sweet, and highly entertaining, the show has left many fans craving more episodes, as opposed to feeling fatigued by the galaxy far, far away.

Season 2 is definitely happening, though it isn’t expected to hit the streaming service until the fall of 2020. To make the wait easier, though, I have prepared this list of movies and TV shows that should hold you over until then. While none of them are Star Wars-related, they are still likely to appeal to viewers who enjoyed the Mandalorian’s themes and its fantastical interpretation of Western/samurai elements. Enjoy. The 1960s saw spy shows rise to prominence on the small screen — The Man from U.N.C.L.E, The Avengers, and Get Smart, and I, Spy, to name a few examples. Elsewhere, Westerns in the form of Bonanza, Rawhide, and Gunsmoke were still going strong, but heading toward their commercial decline as audiences were craving other forms of entertainment.

The Wild Wild West, however, tried to marry the best of both worlds, while tossing monsters, mad scientists, wizards, creatures, politicians, and other crazy characters into the mix. The show follows a pair of secret agents who ride a private train throughout the Old West, fighting all the evil beings they encounter while trying to thwart the plans of a maniacal little person. They also have access to hi-tech gadgets, which come in handy during their battles.

The show was also given the Hollywood remake treatment in 1999, in a critically panned movie starring Will Smith that’s not as bad as people remember. The other shows and movies on this list operate in the same kind of sci-fi wheelhouse as Mandalorian. Still, fans of the Disney+ series ought to check out this seventies martial arts saga starring David Carradine as an exiled Shaolin monk who wanders around the Old West protecting innocent people from ruffians, while simultaneously trying to avoid the assassins that want to end his life.

Kung Fu’s story and themes are also reminiscent of those present in Mandalorian. Both shows revolve around on-the-run protagonists as they roam the lands, finding themselves embroiled in unexpected and very dangerous situations. Furthermore, both shows were inspired by the pop culture of North America and Asia, marrying both to great effect.

Kung Fu is rooted in reality for the most part, but it still contains some Weird Western flavor at times. The third season explores some supernatural concepts, featuring storylines involving demons, curses, and spirits. There are plenty of sci-fi Westerns out there, but sci-fi samurai movies are a rarity. Fortunately, this gem starring the indelible Sonny Chiba exists.

G.I. Samurai centers around a squadron of Japanese Self-Defence Force soldiers that travel back in time to their country’s warring states era. Upon arrival, they find themselves embroiled in a battle between rival samurai clans that want to crown a supreme Shogun. The squad’s captain (Chiba) has his own nefarious ambitions to become a ruler, though, and decides to use modern weapons in an effort to overthrow the samurai factions.

G.I. Samurai is a strange movie that infuses misplaced blues and rock songs into what is otherwise a battle epic. Of course, the action and combat scenes are spectacular, with a final showdown for the ages that’s exhilarating and exhausting. As all war movies should be. In Mandalorian‘s “Chapter 4: Sanctuary,” the hero teams up with another bounty hunter to protect a farming village from some raiders. The episode is essentially one big homage to Seven Samurai and The Magnificent Seven, condensed into 30 minutes of blissful television.

Mandalorian’s sci-fi spin on a familiar concept works well, but other creators have tried something similar in the past. Roger Corman’s 1980 space opera Battle Beyond the Stars follows a group of mercenaries who get hired to protect a farming planet from a tyrannical warlord and his goons. The planet’s inhabitants are even called the Akira, which is an obvious nod to Seven Samurai director Akira Kurosawa.

Battle Beyond the Stars was released to cash in on the popularity of Star Wars, but the film mined some of George Lucas’ Western and samurai influences for inspiration as opposed to just ripping off his movie. It’s a lot of fun, too. Fans of Mandalorian’s “Sanctuary” episode should check out this 1981 thriller from director Peter Hyams. It’s another movie that takes the plot of a classic Western and reapplies it to an outer space environment, making for some solid entertainment.

Essentially High Noon set on Jupiter, Outland stars Sean Connery as an aging marshal in a corrupt mining colony who finds himself marked for death after uncovering a drug ring. The townspeople he’s been hired to protect have no interest in keeping him alive either, and he’s forced to decide between saving his own life or doing the right thing.

According to Hyams, Outland was originally intended as a straight Western. Unfortunately for the director, the genre was dead in the ‘80s, which is why he decided to set the story on another planet. 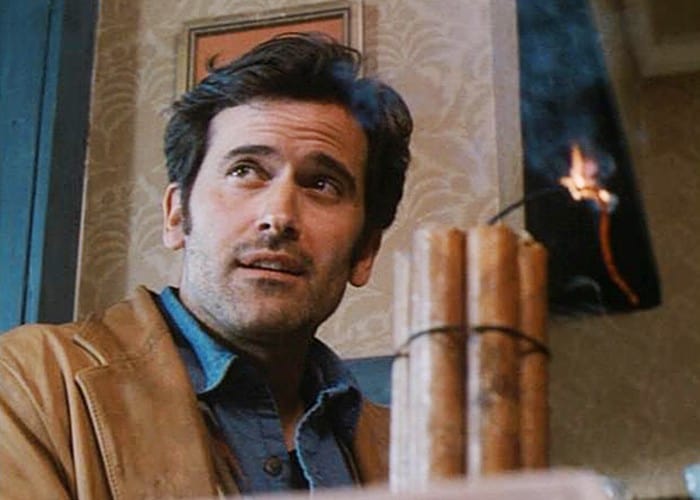 The Adventures of Brisco County, Jr. is an underseen gem that was canceled after one season, but if you mention the show to anyone familiar with it, chances are their face will light up with joy. In this writer’s humble opinion, it’s one of the best-kept secrets in the history of television.

Starring the mighty Bruce Campbell in the titular role, the story follows a bounty hunter as he navigates the Old West, fighting an assortment of bad guys while trying to catch up with the outlaw gang that murdered his father. Along the way, he is forced to deal with bandits, ghosts, ninjas, magic orbs, futuristic machines, and sheriffs that act like Elvis Presley.

Indiana Jones and the Last Crusade writer Jeffrey Boam co-created the series with Carlton Cruse, and the show boasts a similar tone and style to those movies. However, Adventures of Brisco County Jr. is entirely its own thing, mainly due to its weirdness and roster of colorful characters.

Like Mandalorian, Adventures of Brisco County Jr. is a pulpy Western-themed adventure series that blends a bunch of strange influences to create something original and fun. Hunt this one down, and prepare to have one of the best times of your life. Shinichirō Watanabe’s cult-favorite anime series is a unique hybrid of space opera, Western, noir, and comedy, and its genre-mashing approach to storytelling will undoubtedly appeal to fans of Mando’s adventures.

Set in 2071, the show takes place in a lawlessness galaxy, where crime lords reign supreme, and the authorities hire bounty hunters to take on the most dangerous jobs. The series follows a group of these bounty hunters as they travel the solar system on the hunt for fugitives. That’s a fun concept on paper, but the show’s propensity for violence and despair makes for harrowing viewing at times.

Cowboy Bebop was canceled prematurely during its original run. However, when audiences caught on to it, later on, the show was showered in heaps of critical acclaim and hailed as a masterpiece that transcended anime. The show’s legacy has proved to be enduring ever, and fans can expect to see a live-action remake soon. Samurai Jack follows a feudal warrior who gets sent to a dystopian future that’s ruled over by a tyrannical shapeshifting demon, which leads to him going on some strange adventures and encountering all kinds of foes. However, it’s another sci-fi show that was inspired by Westerns and samurai fare and is very similar to Mandalorian in certain departments.

For example, the protagonists in each show are lone wolfs with ties to formidable groups — Jack was trained by legendary Japanese warriors. At the same time, Mando was part of an elite group of galactic mercenaries before he went rogue. That said, both shows are essentially about heroes trying to adjust to a new way of life after circumstances force them to give up their old one, and trouble finds them at every turn.

Samurai Jack and Mandalorian also embrace a wandering approach to storytelling, with each new episode serving as an excuse to explore new corners of their respective universes. Samurai Jack does have a larger overarching plot, but for the most part, the episodes revolve around a fresh distraction that prevents the eponymous hero from reaching his goal.

There is also a connection between Samurai Jack and Star Wars in the form of Genndy Tartakovsky. He is the mastermind behind Samurai Jack, but he also developed the original Clone Wars series that aired in 2003, which remains one of the best Star Wars properties out there to this day. This is a strange double bill that I found myself in the mood for after watching “Chapter 6: The Prisoner.” In the episode, Mando finds himself on a mission to help a group of mercenaries rescue one of their own from space jail. That is until they double-cross him anyway, which leads to the bounty hunter picking them off one-by-one, slasher-style.

Jason X is recommended for obvious reasons: it’s the best space-set slasher movie out there. In the film, the titular hockey mask-sporting maniac is awakened on a spaceship and proceeds to slaughter its inhabitants. While the Mandalorian episode isn’t bloody (and he technically doesn’t kill anyone), the single-location galactic setting, coupled with the simple slasher approach, is sort of reminiscent of Jason X.

Lockout, meanwhile, is a shameless space-based Escape from New York clone. But the movie scores points for taking place in a prison beyond the stars, and for being a helluva lot of fun. The story follows a man who is recruited by the government to spring the President’s daughter from the pen, which is quite similar to the plot of “The Prisoner.” Joss Whedon’s short-lived series is arguably the greatest space Western to ever grace the small screen, and the show’s cult appeal endures even after all these years. The story follows a renegade transport crew who travel across the outskirts of outer space, taking on all manner of jobs, while evading the agents, bounty hunters, and dangerous factions that are out to get them.

Star Wars was a big influence on Whedon while he was creating Firefly. Captain Malcolm Reynolds (Nathan Fillion) is very similar to Han Solo, while the Serenity spacecraft was inspired by the Millennium Falcon. Firefly also paid homage to the legendary galaxy far, far away by sneaking Imperial Shuttles and Starlight Intruders into episodes.

At its core, however, Firefly is another show that combines science fiction and Western elements to tell a story about characters just trying to survive on an episodic basis. The characters in Whedon’s show speak more than Mando, but if they ever had to meet each other, they’d probably be friends. Plus, every episode of Firefly is also a brand new space adventure through the great frontier of outer space. Continuing with the theme of loner warriors, albeit with a unique twist, Afro Samurai follows the titular character as he sets out to avenge the death of his father, who was killed by Justice, the #1 fighter in Japan. Before he can conquer his enemy, though, Afro must battle the countless assassins who desire his headband, as whoever wears it is considered the #2 fighter in the land and is, therefore, eligible to challenge Justice.

Afro Samurai was inspired by the lore of Japan’s ancient warriors. Still, the show — and its spinoff media — takes place in a dystopian future version of feudal times and draws a lot of influence from Spaghetti Westerns, hip-hop culture, and Blaxploitation movies. It’s nothing like Mandalorian, though both properties share enough common themes and influences to serve as complementary viewing.