The Synergy of ‘Inception’ and ‘Paprika’

If you Google Christopher Nolan’s Inception (2010)and Satoshi Kon’s Paprika (2006), you will find a number of articles and blog posts either wondering whether the former is a rip-off of the latter or flat-out accusing it of being so.

For different reasons, both of these approaches are flawed.

The problem with questioning the connection is that it’s hardly a question. Though some sources claim Nolan has been quoted admitting Paprika’s influence, I could not track down said quote from the director in my research. However, looking at Inception itself is sufficient proof of Paprika’s influence ‐ just as Arthur (Joseph Gordon-Levitt) says in the film, “the subject can always trace the genesis of an idea.” From the focus on dream-sharing technology to Ariadne’s wardrobe to references to Greek mythology, physics-defying hallways, significant dream-elevators, and the choice of having a Japanese businessman (Saito) be the one to hire Cobb and the dream team, among other things, either Nolan was influenced by Paprika or it’s the most remarkable case of artistic multiple discovery in cinematic history.

It is not difficult to understand where those calling Inception a rip-off of Paprika are coming from. Nolan and company should have been more forthcoming about their influences ‐ especially in light of Kon’s death shortly after Inception’s release. Similarly, the way that many, including a number of professional film critics, greeted Inception as some sort of paragon of originality would be understandably aggravating for those who knew better.

As a general rule of thumb, claiming originality tends to be a poor choice. People have been telling stories for thousands of years; if you’ve never encountered anything like it before odds are that reflects your limited experience as opposed to anything else. But more importantly, meaning comes through repetition: if you ever encountered something truly original you would have no idea what to make of it. When people say “original” they sometimes mean something more along the lines of creative, thought-provoking, or innovative ‐ all things which Inception could easily be called without disregarding Paprika’s significance.

But while I understand the irritation that inspired people to write about Inception as a Paprika rip-off, the way such an argument flattens the relationship between the films into terms of who-did-this-first and who-did-that-better belittles not just Inception, but Paprika. As is usually the case, there is more insight to be found in a thoughtful discourse than a screaming match. Through patterns we can infer greater meaning; putting the two films in dialogue provides an opportunity to understand more about both movies than looking at either independently.

To start looking at the significance that can be found by putting the films in dialogue, it is necessary to introduce a third player ‐ Surrealism. The most fascinating element of the relationship between Inception and Paprika is not their obvious similarities, but how these similarities can exist while the films are so fundamentally different: Inception is a film aesthetically inspired by Surrealism, while Paprika is a Surrealist film. If André Breton, the author of both Surrealist Manifestos, were still around today, he would likely respond to Paprika with tears of joy, and Inception tears of horror. While the term “Surrealism” today generally brings images to mind visual works of art ‐ perhaps by Dalí, or something that looks like it might as well be ‐ Breton’s first Manifesto, published in 1924, actually specifies that Surrealism has no aesthetic. He defines the term thusly instead:

“[P]ure psychic automatism by means of which one intends to express, either verbally, or in writing, or in any other manner, the actual functioning of thought. Dictated by thought, in the absence of any control exercised by reason, free of any aesthetic or moral concern.”

He similarly speaks of his belief in, “the future resolution of these two states, seemingly so contradictory, of dream and reality, in a kind of absolute reality, a surreality, so to speak.”

Paprika visualizes just such a scenario in which dreams and reality have fully merged. Watching a parade of giant-sized idols and inanimate objects passing by, Detective Toshimi Konakawa asks, “Am I still dreaming?” “Yes, the whole world is,” one of two digital/dream bartenders (it’s complicated) ‐ voiced by director Satoshi Kon ‐ answers calmly, appearing behind Konakawa out of nowhere just before two parking meters and a mailbox hop by. While this merging of dream and reality proves perilous for several characters ‐ protagonist Dr. Atsuko Chiba (a psychiatrist who enters her patient’s dreams as her alter ego, Paprika) attempts to jump a fence in a dream and accidentally almost jumps off a balcony in real life, just as her supervisor Dr. Shima actually did earlier in the film. She is saved by colleague Dr. Morio Osanai, later revealed to be a co-conspirator with the evil Chairman, who is ultimately shot by Konawaka in a dream and killed in real life.

However, in spite all of this, the question of “what is real?” is never the film’s central concern (though it is, interestingly enough, Inception’s). Much like Kon’s other three films, the central concern of Paprika is, instead, identity. Konakawa is preoccupied with discovering the identity of a mystery criminal, the central characters are motivated by the search for a rogue agent using a stolen DC Mini (dreamshare technology) to drive people insane, and Chiba’s fractured sense of self is not just integral to the narrative, but one of the elements that drew Kon to take on the project (the film is an adaptation of a 1993 novel by Yasutaka Tsutsui). 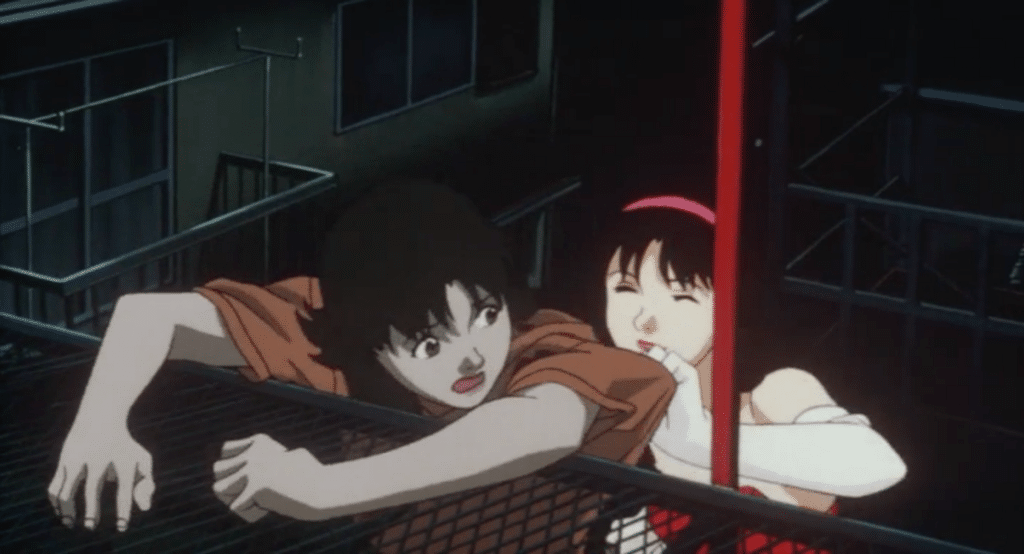 Even when Kon’s films do not deal quite so extensively with dreams —Perfect Blue, Millenium Actress, Tokyo Godfathers (to a much lesser extent), and his television series Paranoia Agent — they are known for their extremely dream-like qualities, made in part possible by Kon’s editing, which fluidly transcends time and space in a way that comes across about as effortless as breathing (if you haven’t seen Kon’s films, Tony Zhou put together a video essay that highlights some of his most ingenious editing). Film theorists have made several different arguments as to just how his films manage to feel so incredibly dream-like, pulling from theorists ranging from Gilles Deleuze to Sigmund Freud, but no matter what divergent paths their arguments take, they all agree on the dream-like qualities that permeate his work.

On the other hand there’s Inception. Whereas Kon was a filmmaker known for his dream “logic” before even truly tackling the subject of dreams in a film, Nolan intentionally crafted a film that inserted logic into dreams. “[W]hat the film tries to do is keep it in the realm of science fiction ‐ to keep it in the realm of the mechanical and the relatable so it doesn’t become abstract and incomprehensible. There are rules to the way the characters use dreaming, which defines reality, which defines the dreams they enter,” Nolan explained in an interview with his brother and frequent collaborator, Jonathan.

In the first Surrealist Manifesto, Breton decries at length what he refers to as the “incurable mania for reducing the unknown to the known,” and if he were around today he would definitely count Nolan as among the afflicted. Just in case there are any remaining doubts about whether the man who literally defined the movement would consider Nolan’s work at odds with Surrealism, I shall point out that Nolan justifies Inception’s focus on architects and architecture as protection against succumbing to “chaos and anarchy” while Breton became a literal anarchist, and leave it at that.

Inception’s rather remarkable achievement of being both about dreams and in direct conflict with the ideals of the Surrealist movement is ultimately neither a weakness nor a strength ‐ it just is. Kon worked in liminal spaces, and therefore his films are difficult, even impossible, to truly pin down. Nolan chose to define his terms, so to speak, in order to be able to construct an argument. Of course, in building a more solid argument, he left room for more criticism: it’s a lot easier to criticize something definite than something that defies description. Indeed, many of the most common criticisms of Inception relate directly to its desire for structure and specificity, such as the assignment of specific temporal relationships between dream layers.

One thing about Paprika that has received surprisingly little attention is its use of Hollywood references. The first time I saw the film, I spent the first minute or so wondering if I had accidentally put on the dubbed version because the first line is in English.

While the film, just like all of Kon’s work, shows global influence ‐ you would be hard-pressed to find a better visualization of convergence culture, albeit a decidedly feverish one, than Paprika’s dream parade ‐ it uses Hollywood references in a specific fashion established in the very first sequence of the film: i.e., they come up in the most fantastical dream sequences. These sometimes shot-for-shot homages to films ranging from Roman Holiday to From Russia With Love are perhaps not particularly remarkable in themselves, and Kon did address his use of Hollywood references in interviews:

I was brought up during the rapid economic development period in Japan, after the war, and the United States occupied Japan for a time. Many Japanese people were dreaming about having a Japan that was as plentiful as the United States seemed to be. Many people worked very hard in order to make a country that would be as rich as the United States. Naturally, many of us looked to Hollywood movies. These were movies where things seemed very bountiful. So the image sources I rely on, time and again, are Hollywood movies.

However, considering a character in Paprika describes “implanting dreams into other people’s heads” as “terrorism” and how Hollywood is on occasion referred to as a dream factory, one would not have to look too hard to see a potential criticism ‐ or perhaps questioning ‐ of Hollywood influence. But I repeat: potential. After all, one of the many dream-like qualities of Kon’s films is that they invite not so much analysis as interpretation with a grain of salt.

Even so, the fact that, of Kon’s films, it is Paprika which has had the biggest influence on a big-budget Hollywood film ‐ one that itself has already proven quite influential, from the visuals of films like Doctor Strange to that “BRAAAM” sound beloved by trailers and action movies everywhere (Hans Zimmer apologizes for that, by the way) ‐ has a certain poetic quality to it.