Welcome to Horrorscope, a monthly column keeping horror nerds and initiates up to date on all the horror content coming to and leaving from your favorite streaming services. Here’s a guide to all the essential horror streaming in June 2021:

Time to put away all your seasonal doom and gloom, it’s finally June!

Flowers! Sunshine! Pollen allergies! The glorious cusp of summer is the best part of the shoulder season. Warmer days are here, but that doesn’t mean the discerning horror fan is left in the lurch! This June brings all manner of streamable ghoulish goodies, from modern Queer Fear classics (it’s Pride Month, after all) to newly restored “lost” offerings from horror greats. Among this month’s highlighted selections we’ve also got a demonic kaiju trilogy that’s criminally underseen in the West, as well as an expressionist international offering that puts the “monk” in “monk-abre” … okay, we’ll see ourselves out.

Be sure to peruse the complete list below, calendar in hand, for a full picture of what horror flicks are coming and going from your favorite streaming services in June. 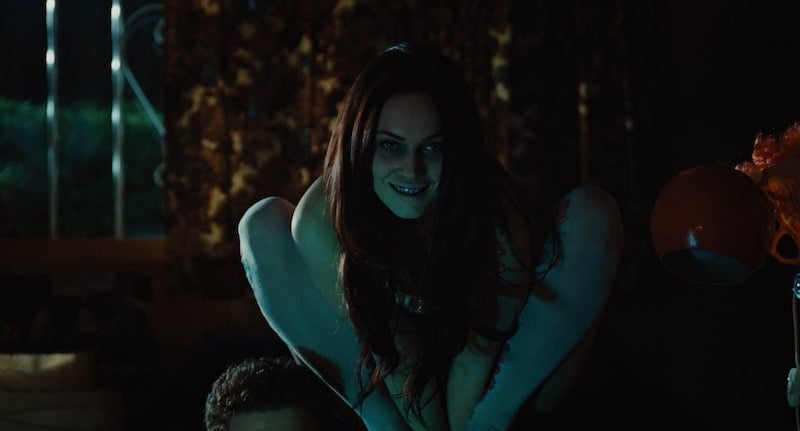 Synopsis: High school is hard enough without demonic possessions. When Jennifer’s titular body is taken over by a nefarious presence, she sets her sights (and stomach) on the hordes of teenage boys tripping over themselves for a chance with her. But when Jennifer’s dour friend Needy finds out about Jennifer’s vicious case of the munchies, she resolves to put an end to her former BFF’s carnage.

When Karyn Kusama and Diablo Cody kicked contemporary horror’s door down in 2009, even they couldn’t have known the life that their teen slasher flick would go on to have. After a middling reception among cowards at the time, Jennifer’s Body has become ubiquitous as a rare example of a legitimate modern cult classic. Following Needy Lesnicki (Amanda Seyfried) in her plight to take down her demonic boy-eating bestie, the film suffers, perhaps, from its own cleverness. Maybe the tongue-in-cheek vernacular of its characters came across as too desperate to be quotable. Maybe the film’s recognition of Megan Fox as a skilled performer looking to take control of her own celebrity was lost on those who wanted her to be a silent pin-up.

But as the legions of teen fans — those who saw themselves in the characters’ angsty, semi-romantic frenemy relationship and in the surging rage against a culture all too eager to exploit adolescent girls — grew up, their love for Jennifer’s Body has elevated the film to new heights. It’s now regarded as a noughties gem, a must-watch for Pride month, and a film that delivers as much raucous, feminist entertainment as it does fake blood.

Available on Hulu on June 1st.

A lost (and found) flick from George A. Romero Synopsis: An elderly man embarks on a casual day at an amusement park only to find himself in a nightmarish hellhole. Forced to reckon with the disorienting and isolating horrors, pains, and humiliations of aging in America, the man spirals as he makes his way through the chaotic, cloying crowds. Finally, an answer to the eternal question: “will there be corndogs in Hell?” Turns out: yes!

You read that right folks. It’s 2021, and we’re getting a new film from legendary horror director George A. Romero. Okay, so The Amusement Park isn’t “new” in the strictest sense of the word. The film was originally produced in 1973, commissioned by the Lutheran Society as an educational parable about elder abuse and ageism. Unsurprisingly, Romero’s final product was a little too disturbing for their taste, and the Lutherans refused to release it. Until its discovery in 2018, the film was believed to have been lost. As Scout Tafoya astutely remarks at RogerEbert.com, in a cinematic landscape kinder to provocative artists like Romero, this rediscovery would be “an event on par with the restoration of Orson Welles’ The Other Side of the Wind. But for that to be the case, the world would have to care a lot more about what horror films have to say.”

Shot in Pennsylvania’s now derelict West View Park, the film stars Lincoln Maazel, whom Romero buffs might remember as the creepy elderly cousin in the director’s 1977 vampiric serial killer movie Martin. Restored in 4K by the New York City-based IndieCollect, The Amusement Park is described in Shudder’s press release as “perhaps Romero’s wildest and most imaginative movie, an allegory about the nightmarish realities of growing older…an alluring snapshot of the filmmaker’s early artistic capacity and style and would go on to inform his ensuing filmography.”

Arriving on Shudder on June 8th. Synopsis: Set in the cavernous halls of a Gothic monastery, an ailing monk, Brother Javier, hasn’t been himself lately. Fearing that he has been possessed by demonic forces, the prior commands the monastery’s newest monk, Brother Juan, to tend to him. But when Juan enters Javier’s cell, something unexpected happens: they recognize each other. A chase ensues, and Javier attempts to bludgeon Juan with a crucifix. When the pair are questioned, they recount two very different versions of their intertwined dark past.

You can barely throw a bible at the horror genre without hitting a depraved piece of nunsploitation. But 1934’s Dos monjes (Two Monks) is for the boys. Intense, brooding, and hauntingly existential, Juan Bustillo Oro’s early Mexican sound melodrama is an unforgettable atmospheric tale of vengeance, heartache, and the devil working in mysterious ways.

Preceding Rashomon by sixteen years, the film implements an audacious flashback structure, recounting the two men’s tragic shared past from each of their perspectives, one right after the other. The jagged visual language of German Expressionism underscores the contradictions in their accounts. Recently restored by The Film Foundation’s World Cinema Project, Dos monjes was added to the Criterion Collection last year.

Arriving on The Criterion Channel on June 1st.

Synopsis: This wildly under-seen kaiju trilogy follows the titular towering god through the oppressive landscape of feudal Japan as the ginormous stone warrior dishes out divine retribution wherever he sees fit.

Not every horror fanatic is in agreement that kaiju films belong in the genre. But to that I say: big things are scary! Especially if they’re a giant animated stone demon god possessed with the furious and righteous purpose of crushing local warlords.

ARROW is bringing its subscribers an opportunity to get acquainted with a staggering kaiju trilogy that has been remarkably overlooked in the West: Daimajin (1966), Return of Daimajin (1966), and Wrath of Daimajin (1966). No, your eyes are not playing tricks on you: all three films were released in the same year, with three different directors, and more-or-less the same crew.

In Daimajin, directed by Kimiyoshi Yasuda, the two children of a benevolent leader flee to the mountains when their parents are murdered by a treacherous usurper. A decade later, the aged priestess protecting the siblings is also killed, an act that rouses the wrath of the ancient, slumbering god. In Return of Daimajin (directed by Lone Wolf and Cub‘s Kenji Misumi), the wrathful deity is summoned once again by the violent acts of yet another blood-thirsty warlord. In his third outing, Wrath of Daimajin, period drama veteran Kazuo Mori tells of a group of children who entreat the towering god to avenge their families, who have been enslaved by a brutish tyrant.

Featuring lavish historical detail and jaw-dropping special effects, the Daimajin trilogy is the most fun you can have watching a terrifying stone demon unleashing divine fury on deserving warmongerers.

Arriving on ARROW on June 1st.