Over the past ten years or so, horror movies have pushed the limits like we haven’t seen since the time of the video nasties of the 1970s and 1980s. While that era had Cannibal Holocaust and the original The Last House on the Left, the new millennium had The Last House on the Left and even more extreme films coming from overseas. Only a few years ago, there seemed to be an unwritten challenge for filmmakers to produce the most heinous and hard-to-watch movies like A Serbian Film and The Human Centipede.

As much as we love mad scientists, we all have to admit that The Human Centipede was a preposterous film. However, it was marketed as being “100% Medically Accurate.” Writer/director Tom Six was not a famous gastroenterological? surgeon (unless he moonlighted while directing the Dutch version of Big Brother), so the assumption was he did intense research to warrant such a statement.

So that got us thinking. Is The Human Centipede anywhere close to being “100% Medically Accurate”?

The Answer: Are you kidding? No. But it’s officially super gross. 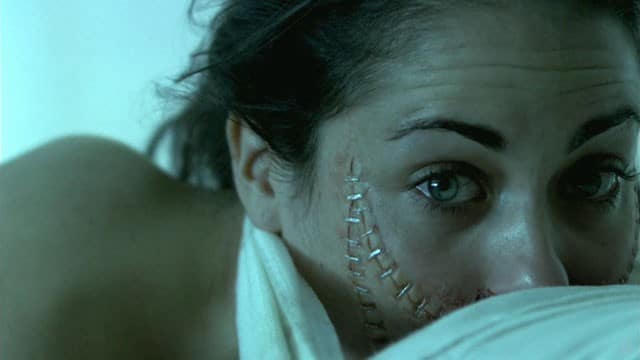 Let’s start with the questionable medical procedure, as described by the mad doctor Josef Heiter (Dieter Laser), who claims to be the leading surgeon in separating conjoined twins:

“We start with cutting the ligamentum patellae, the ligaments of the kneecaps, so knee extension is no longer possible. Pull from B and C the central incisors, the lateral incisors and canines from the upper and lower jaws. The lips from B and C, and the anus of A and B are cut circular along the border between skin and mucosa, the mucous cutaneous zone. Two pedicled grafts are prepared and lifted from their underlying tissue. The V-shaped incisions below the chins of B and C up to the cheeks, connecting the circular mucosa and skin parts of anus and mouth from A to B and B to C. Connect the pedicled grafts to the chin-cheek incisions from A to B and B to C, creating a Siamese triplet, connected via the gastric system. Ingestion by A passes through B to the excretion of C. A human centipede, first sequence.”

I got in touch with Louise Stuart Owen, M.D., who graduated from Stony Brook University School of Medicine and completed her residency at the Mayo Clinic. She’s fully licensed by the American Board of Internal Medicine and is a certified general internist, so she knows what she’s talking about.

While Dr. Owen admits that it is technically possible for a single doctor to perform a complicated three-person surgery in his basement, it is unlikely it could be performed safely, or even performed to completion without one or more of the subjects dying.

Not only could one of the segments in the human centipede very likely bleed to death, they could die due to complications from anesthesia or ventilation. Dr. Owens explains:

“Surgeons are not trained in how to administer pain medication or ventilation for a surgical procedure. That is the job of the anesthesiologist. Using those drugs is very dangerous, and it is likely that the victims would have complications from being drugged (such as difficulty breathing, and death).”

Dr. Owen also makes a point of general caution: “Absolutely under no circumstances should people seek out or plan to do surgical procedures in a basement.” That includes liposuction and stealing kidneys from recently-drugged partygoers, people.

The biggest danger of an insane operation like this would not be tissue rejection (which takes about a week to occur), bur rather infection, which does actually kill one of the subjects in the film. However, infection would occur in everyone within hours because all three subjects’ surgical wounds would be exposed to fecal matter. Before the subjects would even have a chance to ingest any feces (which would expose the recipients to a variety of infections, including hepatits A, hepatitis E, polio, and cholera) to prove Dr. Heiter’s glorious continuous gastric system, they would likely contract sepsis, which is a severe blood infection. From that point, sepsis would make them incoherent and confused.

But what if the operation actually worked?

One of the biggest problems would be that the human centipede would be like the script for The Human Centipede: falling apart at the seams. Because the events in the film take place only over a couple days, there would be little or no healing that would occur at the suture points. Instead, it’s merely surgical staples that are holding the victims together. Dr. Owens describes how regurgitation would be a key factor:

“The whole experience can be quite nauseating for the victim. As anyone who has vomited knows, it is a violent process and likely to dislodge the staples. In addition, as there is not a place for vomit to go for two of the victims (B and C), they would likely inhale vomit. This would cause chemical injury to the lungs from stomach acid, difficulty breathing, and pneumonia.”

Even if vomiting didn’t tear apart the human centipede, any form of movement (especially crawling in the yard, let alone up and down stairs) could. Dr. Owen explains:

“Each can still move their torso and thighs and arms. They would be able to crawl and could pull apart (though this would be very painful and cause extensive bleeding). The staples/sutures would pull during movement and likely dislodge. A firm cough or vomit would likely cause them to at least partially dislodge.”

So this isn’t really possible in any way, huh?

According to Dr. Owen (and probably anyone else in the international medical community), that’s a flat-out “No.” Furthermore, she adds: “This movie is super gross. No one should have surgery in a basement by a mentally disturbed physician!!!”

You hear that, Tom Six? Your movie’s a load a hogwash. And you’re super gross. As Dr. Herbert West would say, “Get a job in a sideshow.”