Celebrate the wisdom of a living cinematic legend.
By Ciara Wardlow · Published on August 14th, 2018

Celebrate the wisdom of a living cinematic legend.

On August 14, 1945, Wim Wenders was born in Düsseldorf, Germany— the very same day World War II fighting ended in the Pacific. While he has said that growing up in post-war Germany was unsurprisingly not the most joyful of places, Wenders spent his childhood consuming a cultural diet of primarily American imports, ranging from Elvis to Westerns. As such, it’s perhaps not surprising that many of Wenders’ most iconic works are imbued with a vibe that might be described as the American Beat Generation meets German Romanticism, yearning and wanderlust mellowed with a strong dose of ennui.

One of a trio of filmmakers who rose to international prominence in the 1970s as part of the New German Cinema/German New Wave movement (the other two being Rainer Werner Fassbinder and Werner Herzog), Wenders’ career has been marked by a paradoxical combination of consistency and constant evolution, from fiction to documentary and back again, traversing genres and languages. He broke onto the scene with his first three road films, Alice in the Cities (1974), The Wrong Move (1975), and Kings of the Road (1976), now commonly regarded collectively as the Road Trilogy due to their narrative and stylistic similarities, even though they were never intended as a series. Wenders’ best-known films include the 1984 Harry Dean Stanton starrer Paris, Texas and the romantic fantasy steeped in existentialism that is Wings of Desire, released in 1987.

He’s won the Palme d’Or and Best Director at Cannes Film Festival (for Paris, Texas and Wings of Desire, respectively) and the BAFTA for Best Direction (Paris, Texas), and he’s been Oscar-nominated for Best Documentary Feature three times (The Salt of the Earth, Pina, and Buena Vista Social Club), among other honors. When it comes to filmmaking, Wenders is a living legend, and he’s shared plenty of advice along the way, including the following six tips.

Make The Films Only You Can Make

Wenders took part in Louisiana Channel’s “Advice to the Young” video series in 2014 and shared a youth-specific version of one of his favorite (or at least, most frequent) pieces of advice to give in interviews:

While promoting his documentary Pope Francis: A Man of His Word, Wenders spoke with America: The Jesuit Review at the 2018 Cannes Film Festival, discussing the big issues of existence and cinema over gourmet finger foods and rosé, as one does. On the subject of making movies that matter, he had the following to say:

“As a filmmaker I can tell you, you cannot intend to make a film that matters […]But sometimes this miraculous thing happens, that a film that is dear to someone’s heart, like the filmmaker’s, becomes dear to other people’s hearts and all of a sudden, the fact that it matters appears as something that you do together—the audience as well as the filmmaker—and that you feel together. So I think the only thing that matters is these miraculous agglomerations of happiness and of meaning. That’s when you’ve touched on something that touched the audience and that the audience needed at that moment,” If You Want Freedom, Make A Road Movie

In a 2015 interview with Interview magazine, Wenders commented that when making Alice in the Cities, his first road movie, he felt like “a fish in the water,” having found the kind of filmmaking he was born for. He went on to elaborate that, as the crew also had to take the trip experienced by the characters, road movies necessitate shooting in chronological order, which in turn opens up a world of narrative freedom:

“In a road movie, you start at A and you go to B, C, D, and you arrive at a certain road. I thought it was so fabulous, because it allows you, at any given point, to change the course of the movie. In regular filmmaking you can never, ever do that because most filmmaking circumstances, you often shoot the ending before the beginning. You have no leeway to change anything. In a road movie, you have total freedom. It encourages you to go left instead of right. It encourages you to come up with better ideas than you had when you were writing the script.” 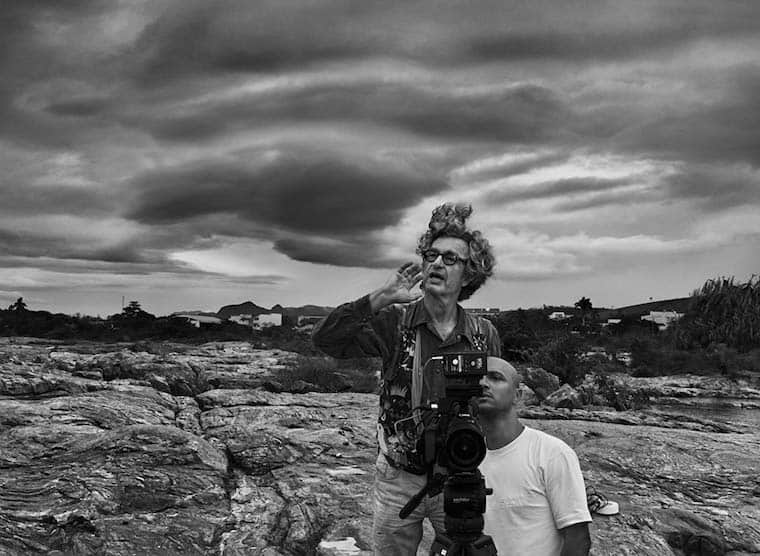 Think of Space and Time

In 2014, BAFTA Guru posted a video interview with Wenders, in which he gives some quality directing advice. Here’s a piece regarding two of the most important considerations to keep in mind while filming:

“I call it a sense of place. You have to, when you’re on location, you have to know where you put your camera, and you have to understand the place[…] if you don’t have a sense of place, you’ll find yourself lost. You need a sense of time because in the process of making a movie you produce hundreds of little elements, every shot is one element, and in the end it’s like building a building out of many little stones, and you only produce one stone at a time. So you need a sense of time, sort of an architecture of time.”

See Wenders give more of his advice here:

Your Best Film Will Probably Hurt

In a 2012 interview with Point of View magazine, Wenders talked primarily about his nonfiction work, especially Pina, his 2011 3D documentary tribute to the dancer and choreographer Pina Bausch. But some of his responses deal with the filmmaking process more generally, including the following comment:

I think it’s very rare that you make a film where there are no obstacles to overcome and everything runs smoothly. And it’s very rare that such experiences turn into a good movie. In my own experience, those films where you really stood in front of a mountain of problems and had to overcome huge difficulties, where you were heartbroken that you couldn’t do things and you had to come up with ideas in order to cover up for something — those are the interesting films. Those are really the films that count, not the films where everything goes smoothly. They rarely have that power afterwards. I think the films that break your heart in between also have the potential to break other people’s. There Are No Rules

In 2013, Wenders submitted a list of 50 pithy filmmaking tips to MovieMaker magazine for their “Things I’ve Learned” series. Some of the tips listed include shorter versions of tips listed above, but also a number of other, frequently more practical concerns.

He had, for example, the following to say regarding continuity:

“Your continuity girl is always right about screen directions, jumping the axis and that sort of stuff. Don’t fight her. Bring her flowers.”

This particular warning to give about rain:

“Rain only shows on the screen when you backlight it.”

And a cautionary word about considering the rest of the crew:

“If your dolly grip is grumpy or your electricians hate the shot it will all show on the film.”

However, Wenders ended his list with perhaps the most important rules of all:

50. None of the above is necessarily correct.

As a preeminent filmmaker who has been a major name in world cinema for over 40 years, Wenders has given a fair share of filmmaking advice. However, the one key point he returns to time and time again is not something that can be learned or copied from him or anyone else, but precisely the opposite: the filmmakers who make a mark are those who dedicate themselves to stories that truly speak to them, and who push themselves to find their own unique voices as artists and storytellers.