The ensemble comedy master behind ‘The Best Man’ and ‘Girls Trip’ shares advice on making it in Hollywood.
By Ciara Wardlow · Published on September 25th, 2018

Known for his hilarious ensemble comedies, including last year’s wonderfully raunchy Girls Trip, Malcolm D. Lee had no idea as a kid that movies would one day be the “family business”—or that his cousin Spike, who lived with Malcolm and his family in Brooklyn while attending NYU, would go on to become one of the most prominent filmmakers of his generation. While he was always creative, it wasn’t until college that Malcolm D. Lee settled specifically on filmmaking, from there working his way up the ladder and eventually making his feature debut in 1999 with The Best Man, which he both wrote and directed. Lee has learned a number of things in his 20-plus years in the industry, many of which he’s shared with those filmmakers who’ve come after him. Here are six of his best tips:

In a 2009 interview with Clayton Perry leading up to the DVD release of Soul Men, a musical comedy starring Samuel L. Jackson and Bernie Mac that hit theaters shortly after Mac’s death, Lee addressed the importance of staying relatable:

In my work I like to have it as grounded as possible, have it be authentic whether it’s the dialogue or the prose or the make-up and hair – just make sure it’s grounded in reality. […] There’s going to be some outlandish and silly things that happen because it’s a comedy. But, hopefully, it’s grounded in reality, with people and places that are relatable to the audience.” Timing is always important, but perhaps nowhere more so than with comedy, where a few beats can be the difference between a great joke and one that’s DOA. In a 2008 interview with blackfilm.com, Lee spoke of the need to make difficult choices when editing comedy:

“You can’t put it all in. A lot of times in comedies, you want the biggest laugh and move on. Don’t try to linger too much.” While Lee has made efforts to develop a signature style over the years— “life movies with a lot of laughs and some tears”—he also recognizes the importance of appealing to a crowd. He addressed the necessity of simultaneously keeping these separate goals in mind when speaking with video channel “What’s The 411” in 2011: Write (and Direct) for the Right Reasons

In an interview with George Alexander included in the 2003 book “Why We Make Movies: Black Filmmakers Talk About the Magic of Cinema,” Lee addressed what advice he would give to those looking to pursue a career in directing. Film school he deemed unnecessary—”you don’t have to go to film school. I needed to go to film school because I like a structured environment.” One thing he did deem important for any and all aspiring filmmakers, however, is writing—and lots of it: Be Wary of Replicating Images

In 2011, Spike Lee and Tyler Perry exchanged heated critiques, with Lee accusing Perry of playing into offensive stereotypes and Perry accusing Lee of being, basically, elitist. In an interview with Black Public Media shortly after this debate, Malcolm D. Lee was asked for his take on the situation and the general concept of the “responsibility of the storyteller.” This is what he had to say:

“The responsibility is to the story you want to tell. There used to be a whole big hubbub about ‘hood movies,’ how we need to stop glorifying this life, etc. And some people actually don’t feel like Tyler Perry is glorifying [stereotypes]. But the main thing is these images tend to replicate themselves. I think we could all do better.” 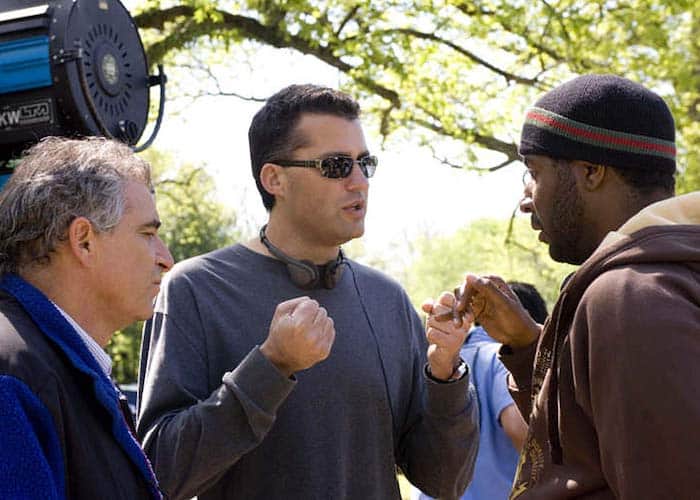 Stick With Your Vision, But Don’t Ignore Good Advice

While promoting Barbershop: The Next Cut in 2016, Lee was interviewed on the Black Girl Nerds podcast and addressed the eternally popular “what advice would you give young filmmakers?” question once more, and this time he answered with a twist directed specifically towards young filmmakers of color (though the overall message applies to any and all directorial hopefuls):

“If you’re telling a story from your experience, from your cultural perspective, nobody can really tell that story like you. So you have to be able to stick to your guns about telling that story and how you want to tell it. That does not mean that you’re pigheaded about it and that you don’t listen to good advice. You take what opinions matter […] And that’s something that has to be learned as well, you know, what to take and what to dismiss. I think that one note is just an opinion, two of the same note is a note—it’s confusing people, it’s bumping people—and unless you really have a strong opinion about why it needs to be “x” way, you should listen to that note, or at least take it into consideration. […] Every note is worth considering, at least for, you know, five minutes. Say, okay, well, if I do that, what’s that going to mean? But at the same time you have to be strong in your conviction about what you want to do, and how you want to do it. So it’s a balance.”

Success can take a while. While 1999’s The Best Man was an impressive debut by any measure—over $34.5 million at the box office against a $9 million budget—recent interviews have indicated that Lee is only just now starting to feel at home in the industry, having only scored a first-look deal with Universal within the past year. Over time, the same forces that worked against you—Lee considers the performance of several of his films, such as 2004’s Roll Bounce, to have been undermined by poor marketing strategies and especially bad release dates—can go on to work in your favor, such as was the case with Girls Trip, which was very much the case of the right film receiving a serious boost by being released at the right time. Hard work does pay off, but it can take a while.