“I owe you an apology. You guys are true representations of the city of Philadelphia.”

I’ve been told that if you love sports, this episode means a lot. I’ve been told that if you love the Eagles, it means everything. If you’re judging it from a critical perspective, however, it’s a little rough. Digging pretty deep into the show’s bench to make up for the lack of both Dennis and Charlie, the episode relies a little too heavily on the assumption that the peripheral Always Sunny characters are bad people, without especially showing that they are. (It also relies on the strange insistence that Frank can’t go to the bathroom unless Mac takes him). If you’re a fan of neither sports nor the Eagles, this episode is best appreciated as Rob McElhenney’s love letter to Philadelphia, his hometown. Mac is in charge of the extended gang because Dennis is missing, sure, but also because McElhenney is answering for his own slew of misfits he’s unleashed on the world. When Frank confirms that drunken Waitress and burn victim Cricket and whatever the hell Uncle Jack is are true representations of the city of Philadelphia, it’s almost heartwarming. Far and away the best moment comes during the credits, when we see Kaitlin Olson’s footage of the real Rob McElhenney at the real Super Bowl, overcome with excitement and pride for his city. 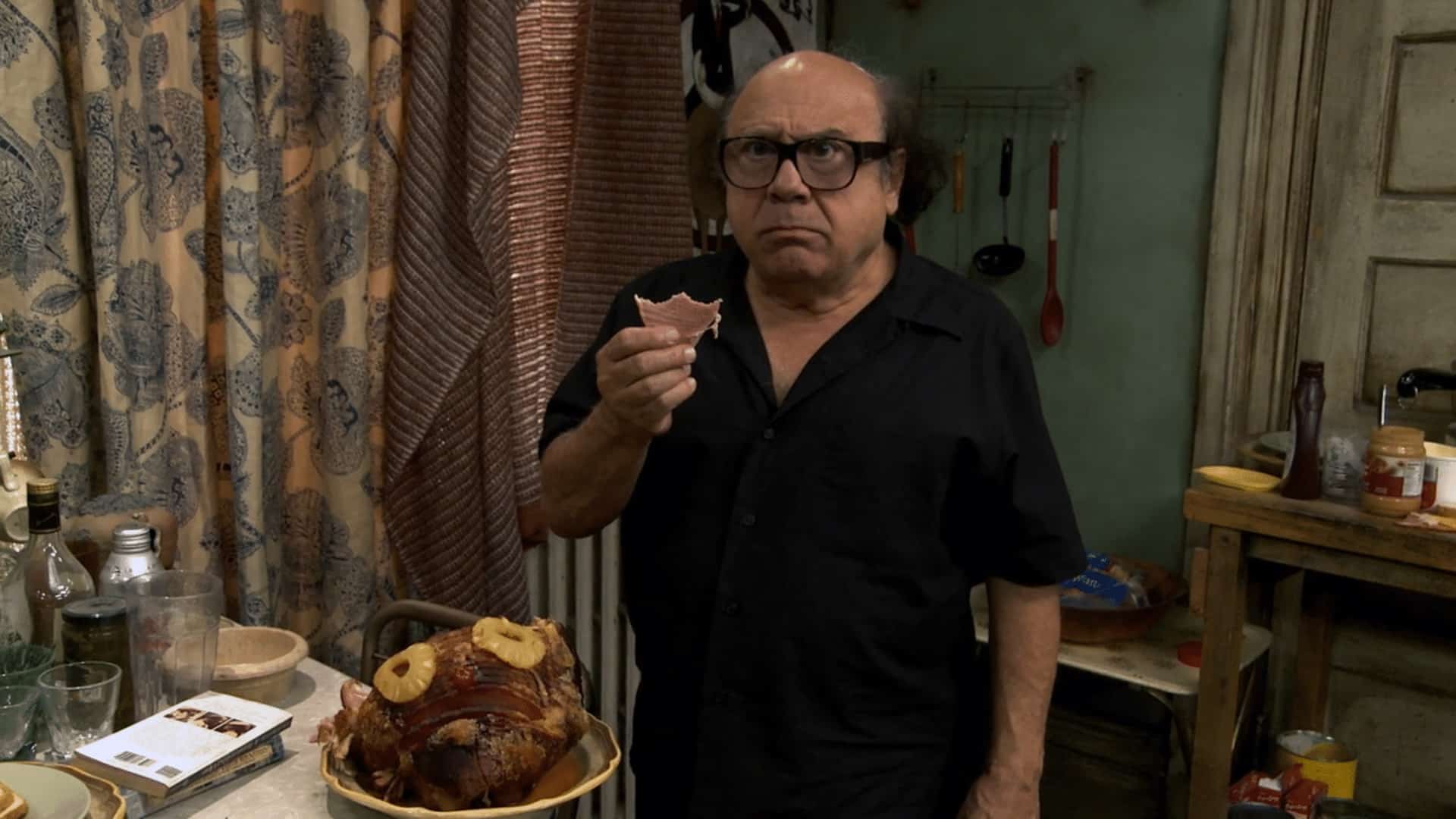 “See now, he assumes that you have a cat.”

As self-referential episodes go, I much prefer “The Gang Recycles Their Trash.” But “Window” has a lot going for it, and a slightly different agenda. Rather than a revival of old material, this episode is essentially just a replay of “Charlie Gets Crippled”… except everyone has aged ten years. It’s a fun look at how far the gang and the show have come. And how far they haven’t. The most horrifying and understated change is how far the Waitress has fallen after a decade of being mixed up with the gang. If anyone deserves to get a second chance at 2006, it’s her. Somehow, this is not the episode of Always Sunny written by Game of Thrones creators D.B. Weiss and David Benioff. But it might as well be. It’s a surprisingly straightforward tale of betrayal and subterfuge that’s saved by the Franquito reveal in the end. How they didn’t let slip a single incestuous twin joke is beyond me. I would’ve done it. “Aw shit. I think we crossed right past each other like ships in the night.”

As social issues go, gun control gets a remarkably even treatment from the show. Rather than coming down hard on one side, the gang split into both extremes, learn a lesson, and completely change their minds. The real villain in the end is Frank, who thinks of himself as a duper, a cross between the NRA and Al Gore. It’s not the most subtle message, but it is oddly unifying. In the end, we’re all dupees. “The Democratic vote for me is right thing to do, Philadelphia, so do.”

It’s so often the case that the gang are the ones screwing other people over, it’s downright strange to see it happen the other way around. But it does, when Mac makes the fatal mistake of calling the head of a union a nerd. It’s a formula the show has more or less abandoned, because honestly it’s more fun to see the gang ruin things for themselves. Charlie’s campaign speech is lovely, though. 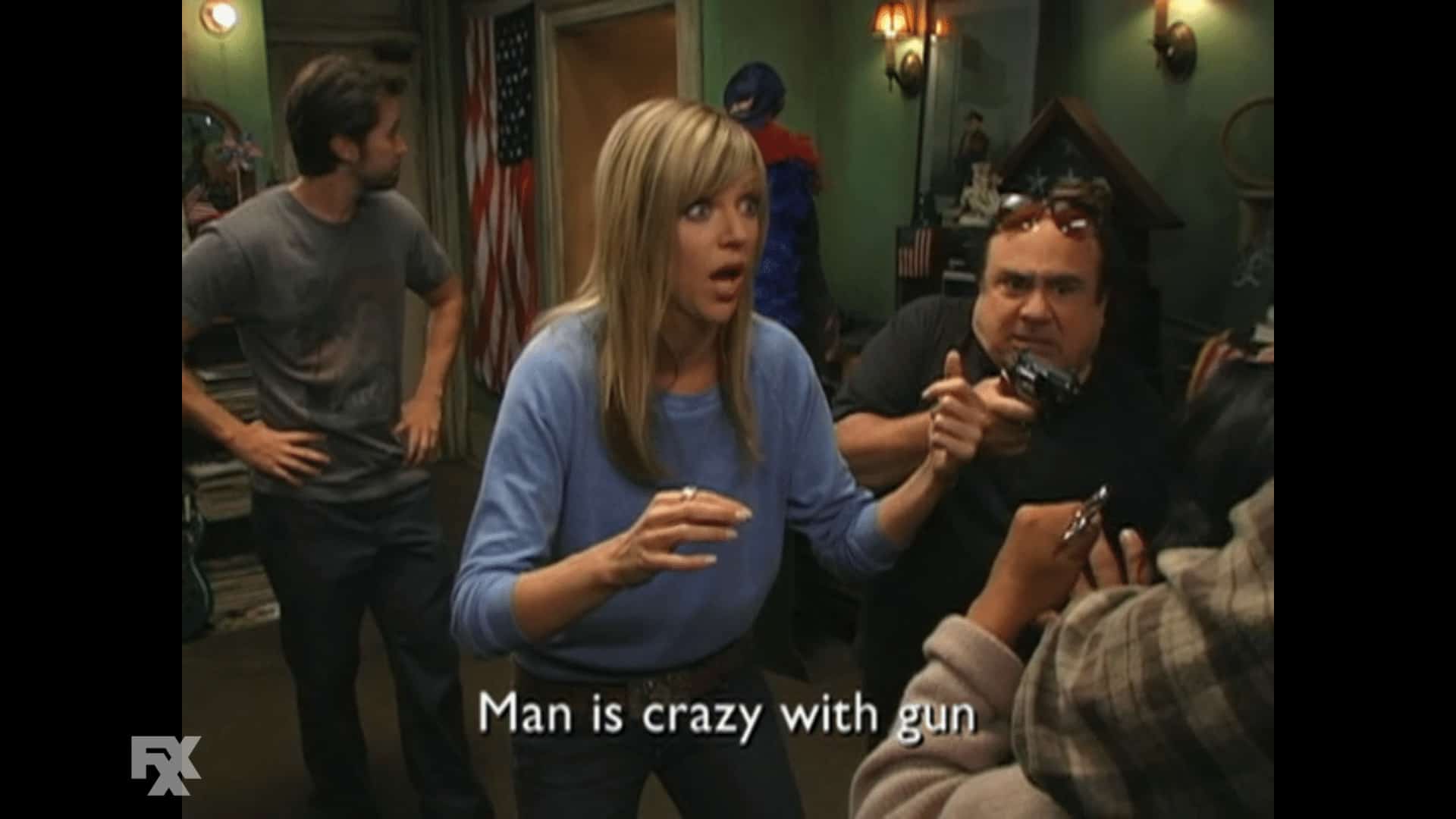 Who’s the worst offender in the persecution of the poor Juarez family? Is it Frank, who understands what’s going on, or is it the rest of the gang, who don’t? It might be a tie. This is an episode in which everyone is truly comically awful, and it almost hurts to watch. But it’s also a rare instance of genuine comeuppance. The Juarez family suffer, but the system actually rewards them in the end. It’s the kind of justice you don’t see often in Always Sunny. (The reveal, years later, that the Juarezes lost the Reynolds house when they couldn’t pay the property taxes is a little detail much more in keeping with the show’s style, and a favorite of mine). “He did make it inside me, but just barely. And the guy was super small, so I’m fine.”

Dee and Mac’s Catfishing adventure is fun, and and so is Frank’s virus video. But if anything’s truly worth rewatching, it’s Charlie and Dennis’ attempt to hunt down their shusher. Their false rape report is one of the few times that even in the best take, the one that they went with, Glenn Howerton and Charlie Day are just barely holding it together. You can see outtakes on YouTube that give you a better sense of just how close to breaking they are. “Anti-Social Network” is a fine episode on its own, but that scene and the obvious joy the cast derive from working on the show are what really make it. 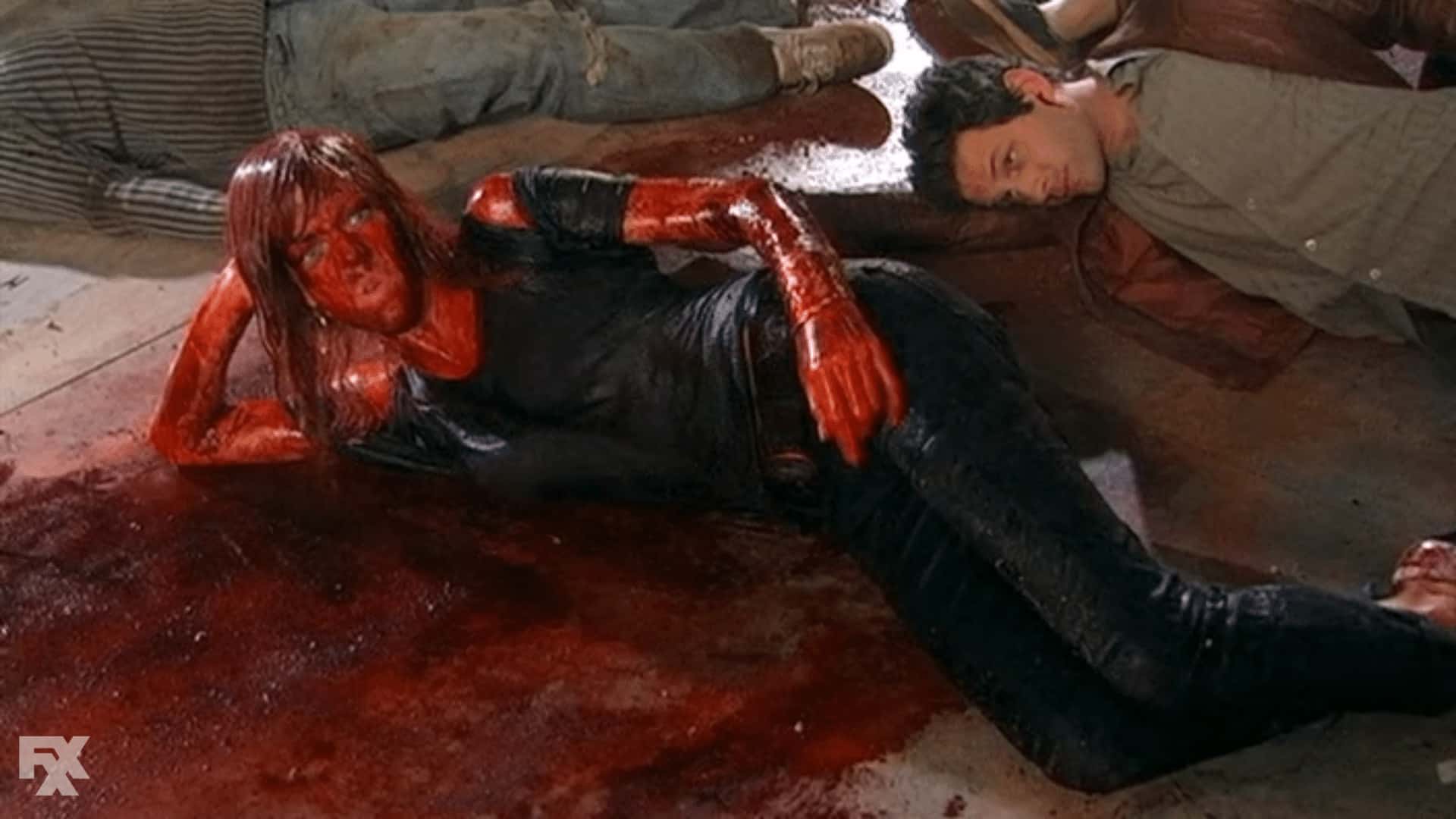 Forget the duct tape and zip ties. The only evidence I need that Dennis Reynolds is a psychopath is that he writes an entire movie script on his phone. Without saving. While Dee’s plot is a little predictable, and Dennis’ is a little strange, Mac and Charlie’s script writing process is perfect. I would love to see Dolph Lundgren smell crime. With or without the full penetration. “As long as you hurt the other kid as bad or worse than he hurts you, you will have done your job, and I’ll be proud of you.”

For once in their lives, the gang face the consequences of their actions. Granted, the consequence of making a terrorist tape and blowing up a building is coaching a youth basketball league, but they still manage to complain about it. It’s a fun, classic early episode in which everyone is horrible, but still in believable, real person ways. “I am no longer turned on by mules.”

Always Sunny is so famous for blackface, it’s easy to forget the time Dee tried to make it big by filming every other racist stereotype under the sun. It’s remarkable to see Charlie of all people as the disapproving voice of reason behind the video camera. The gang’s fun take on reality tv, this episode is mostly buoyed by Frank’s very short term enthusiasm for male models and the first appearance of Rex, idiot beefcake with a body that just won’t quit. With the whole gang back together and treating each other terribly, this ought to feel like a welcome return to form, much like “New Wheels.” But something’s just a little off. Maybe it’s the hyper-constructed nature of the script. (The dialogue is missing its natural flow without making up for it with its usual self awareness). Maybe it’s the happy ending. It’s virtually impossible to earn the respect of the gang, most of all for Dee, and I find it hard to believe that something as simple as almost falling to your death is enough to do it. It’s one of the rare moments of warmth that I think comes too easily and, because of the usual acerbic nature of the show, just doesn’t quite work. 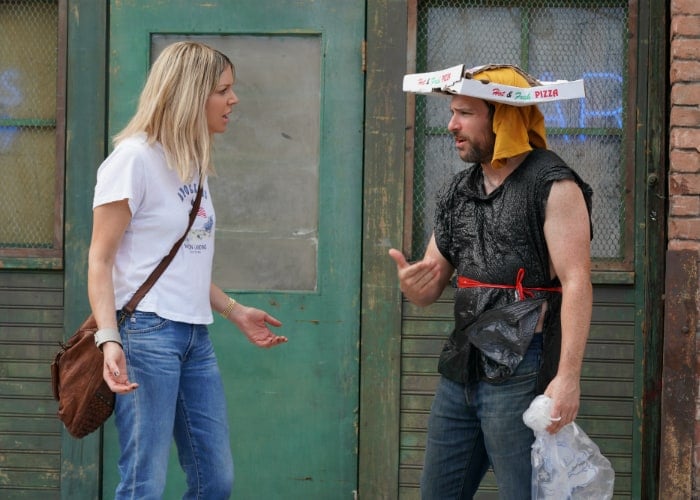 “Last time you get recycled. Hope a bird chokes to death on you.”

As thinly veiled allegories for real-life problems go, this is one of the show’s more thinly veiled. Paddy’s Pub (inexplicably with the most attractive clientele it’s ever seen) becomes a microcosm for the warming Earth. And, of course, everything goes to hell. Maybe it’s a reflection on the actual bleakness of the situation, but a lot of the comedy doesn’t follow through as well as it usually does, even in the most blatant of the show’s political commentary. However, the supposed B plot of Charlie and Dee’s ice buying adventure is pretty satisfying. (And it very gratifyingly reprises Atticus Todd’s role as “Big Strange Dude,” who first breathed in Dee’s face on a bus way back in 2008). The highlight of the episode for me is Charlie’s easy ability to adapt, which I find very comforting. No matter what happens to our planet and to the rest of us, Charlie Kelly will thrive. There’s something extra horrible about pretending to date your dad, even if he isn’t really your dad. There’s something really skin crawling about being pressured into possibly having sex with him. This is an episode of weird extremes that make you wonder just how far this show is willing to go. The answer is somewhere between sexual and marital incest. And somewhere beyond throwing college kids off the roof. 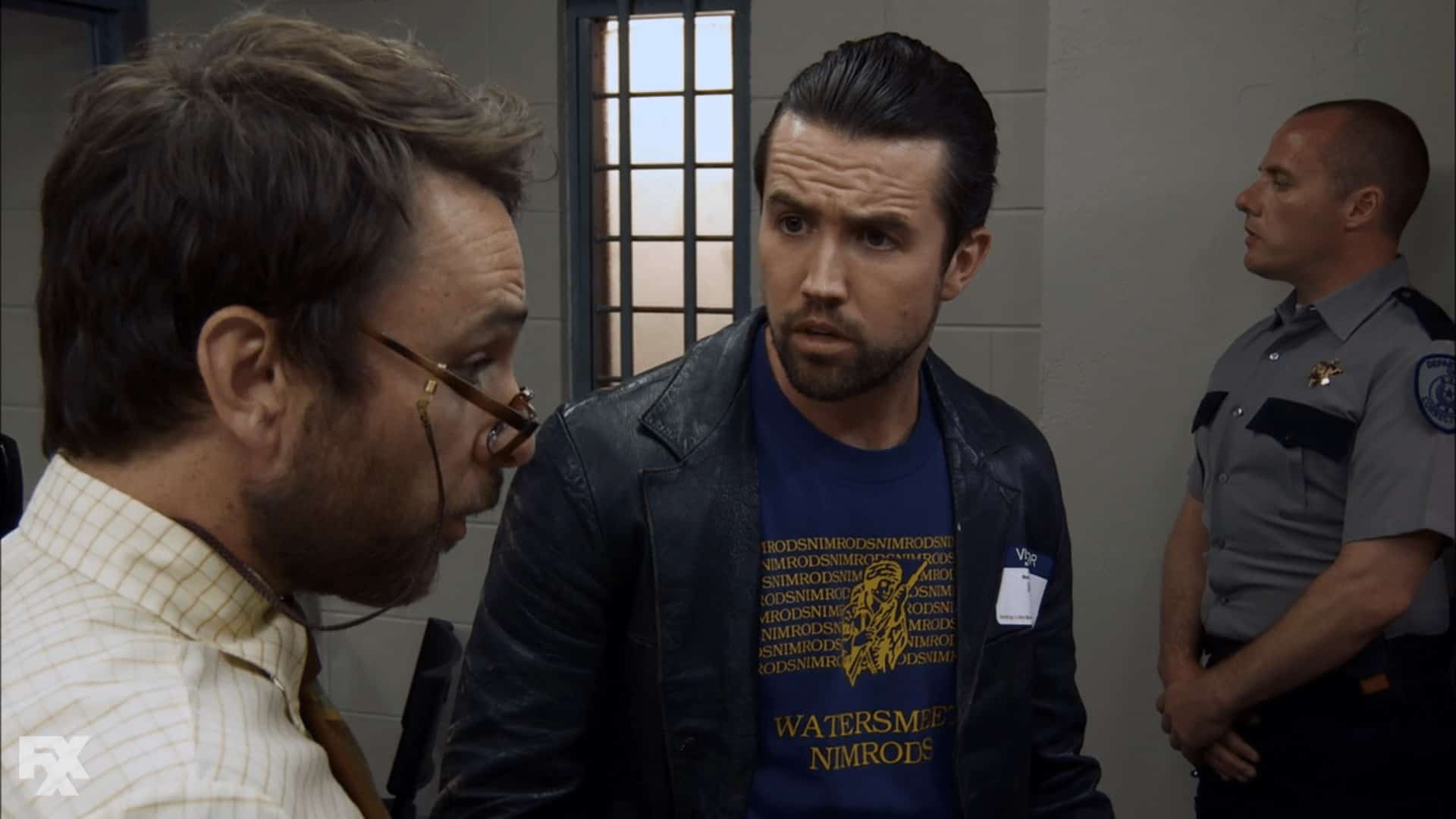 Winner of Best Cold Open/Title Card Juxtaposition. “Mac Kills His Dad” is a solid enough episode, even if the Life Is Happy plotline feels a little forced. Whenever Charlie decides to be a lawyer, I have a good time. And it’s all worth it to see poor Charlie and Mac learn about Mrs. Kelly’s sexual exploits, a long-running gag that makes me wince and laugh every time. “You’re gonna peak all over everybody.”

The gang really go off the rails in this one. Frank and Mac start by running a sweatshop that they eventually morph into a full-on concentration camp. Charlie essentially turns into a dog. Dee tortures him for information. But the real insanity comes from Dennis, who can’t handle being turned down by a woman. In fact it’s because of Dennis’ unhinged egoism that everything else goes south. “Aluminum Monster” is two parts comedic hyperbole and one part character building, an odd but intriguing ratio. Here’s a fun fact. Before I watched Always Sunny in earnest, I had no idea that Frank was Dennis and Dee’s dad. Here’s another fun fact. Danny DeVito was brought in for the second season to give the show a big name and save it from obscurity. Frank has become such an integral part of the show, and so far from a father figure, that it’s a little surreal to see how it all started. It’s a good episode, though — a natural enough introduction that’s already a little more debauched and a little more tightly written than the first season. It’s a sign of great things to come.