We’re just a couple weeks out from descending on Austin for Fantastic Fest, but that doesn’t mean we’re not also thinking about other film festivals too. Genre lovers have lots to love this time of year as the UK’s Fractured Visions, Colorado’s Telluride Horror Show, and the always terrific Toronto After Dark will be delighting audiences in the coming weeks, and for horror fans in the New York area there’s the Third Annual Brooklyn Horror Film Festival. Their first wave of titles was already impressive enough, but they recently doubled down with an equally amazing second wave.

Ten more feature films have been added in addition to dozens of shorts and a handful of special events. Most of the features come from new or lesser known talents, but two have some recognizable cachet for horror fans. In Fabric is the new film from Peter Strickland who previously brought the visually sumptuous goods with Berberian Sound Studio and Duke of Burgundy, and Ghost Mask: Scar is a new South Korean chiller from One Cut of the Dead cinematographer Takeshi Sone.

Keep reading for a look at the complete list of new features playing the fest, and check out the Brooklyn Horror Film Festival site for more details.

Stricken with grief, Aubrey is having a difficult time coping with the death of her best friend, Grace. To combat the overwhelming sadness, she breaks into Grace’s apartment and quietly picks up where her late friend left off, caring for her pets and using her possessions, not to mention sleeping in her bed. The next morning, though, everything’s changed. The streets outside are desolate, fires engulf the city, and people are being attacked by something inhuman. There’s only one person who can potentially save the world: Aubrey, thanks to clues found on mixtapes left by Grace.

An endlessly creative gambit that fuses multiple genres, including cosmic horror, director A.T. White’s STARFISH is one of the most ambitious feature debuts in years. It’s also one of the year’s best films, an emotionally potent, frequently terrifying, and wholly disorienting mash-up of a film that plays like ETERNAL SUNSHINE OF THE SPOTLESS MIND as remixed by H.P. Lovecraft. After returning to her family’s native Latvia to mourn her father’s death, American single mother Madaline begins suffering from inexplicable visions and physical scars, all of which point to the gift—or curse, rather—the Holy Stigmata. To seek help, Madaline travels to an island convent and ingratiates herself within the sisterhood of nuns. But much to her detriment, Madaline’s new acquaintances pray to something far more sinister than the Holy Spirit, leading her to realize that those newfound afflictions come from anywhere but Heaven.

Providing an effectively retro spin on modern religious horror, WELCOME TO MERCY utilizes the best sacrilegious genre tropes, everything from evil nuns to weaponized crosses, to weave a powerful story of tested faith and hard-earned redemption. Anchored by a fierce performance from lead actress Kristen Ruhlin, who also wrote the screenplay, WELCOME TO MERCY packs a serious punch.

There’s something off about the vintage department store in which single mother Sheila finds herself looking for a fancy new dress. The store’s employees are nearly robotic in their stone-faced dedication to sales, the mannequins seem to be whispering to one another, women nearly trample each other to enter as its doors, and its television commercials are hypnotically sinister. Nevertheless, Sheila buys a lavish red dress. Little does she know, her life will soon be overcome by a series of random misfortunes, supernatural phenomena, and living nightmares. And, it seems, the dress is to blame.

A devastating scene sets the stage for a haunting account of demonic terror on the American frontier in the 1800’s. Lizzy and Isaac welcome a couple, Emma and Gideon from Illinois, who take up residence in a nearby abandoned cabin. Not long after, Emma fears she is being hunted down by an evil spirit who wants her unborn baby and violently succumbs to her mania. This event reawakens Lizzy’s buried memories of her encounters with the demons on the land and when Isaac leaves to accompany Gideon back to Illinois, Lizzy is left alone to wage battle against the evil on the land.

Emma Tammi’s narrative feature debut makes astoundingly effective use of the American Western frontier. The wide open, barren and desolate wastelands combined with the atmospheric sounds of the elements and unrelenting gusts of wind (or are they whispers from the dead?) create a sense of helplessness unmatched by the claustrophobia of a haunted house and makes a strong case that we need more western horror films in our lives.

Following an undisclosed shame, former puppeteer Philip returns to his shabby Norfolk childhood home and only surviving family member, gratingly unpleasant stepfather Maurice. Hanging off the edge of his own sanity, Philip tries to destroy his horrid memories which are encapsulated in the form of Possum, a large and hideous spider puppet. But Possum only pretends to be dead.

Under-appreciated character actor Sean Harris (recently recognizable as MISSION: IMPOSSIBLE antagonist Solomon Lane) stars with an insanely nuanced and chilling portrayal of isolation and trauma. Shot on 35mm with a fittingly yellow-and-brown-rotted palette and a puppet that delivers some seriously disturbing imagery, writer-director Matthew Holness’ first feature is a twisted psychological thriller that deep-dives into a bleak surrealist nightmare.

To celebrate graduating from high school, Julia and her classmates take off for a party-resort in Croatia to experience the banger to end all bangers. As the epic party rages on, Julia’s best friend Jessica mysteriously disappears leaving nothing but a suspicious text and a Snapchat photo with her face scratched out. Then another friend slips off a roof to her death—and Julia receives another Snapchat photo. Uh oh.

Energetic and aesthetically gorgeous (mostly shot at the actual X-Jam Festival), Austrian director Dominic Hartl’s glossy homage to ‘90s teen slasher films is high on style while choosing to embrace new age connectivity when so many recent genre films would rather run from it, updating the slasher for the iPhone and EDM generation.

Young churchgoing boy scout Tyler’s reputation takes a hit when his crush finds a pornographic bondage picture in his dad’s truck, believing it to be his. Ostracized from his group of friends, he falls in with Kassi, a teenage orphan obsessed with the Clovehitch Killer, a serial killer with a penchant for the clove hitch knot who once terrorized their town and was never found. After discovering more photos hidden in his dad’s work shed he’s left to fear the worst.

Rising talent Charlie Plummer is excellent as the innocent Tyler, but it’s Dylan McDermott playing his father, Don, who really owns the film with his paternal suburban transformation that’s every bit as campy and creepy as you would hope it to be. Directed by newcomer Duncan Skiles and written by Christopher Ford, frequent collaborator of Jon Watts on films such as CLOWN and COP CAR, this small town thriller has a sinister edge and sports an exciting narrative device that flips the story on its head.

Miyu travels from Japan to Seoul, Korea trying to track down her older sister who has been missing for two years. Shortly after she arrives she meets plastic surgeon Hana, who invites her home to meet her lover Hyoshin. The three women cohabitate as Miyu’s search for her sister intensifies meanwhile Hyoshin, haunted by disturbing nightmares, becomes suspicious of Hana and Miyu’s relationship.

A tragic story of two Japanese sisters separated at childhood and plagued by jealousy, negligence and abandonment, GHOST MASK: SCAR is directed and shot by prolific cinematographer Takeshi Sone (he also shot recent festival hit ONE CUT OF THE DEAD) and features a ricocheting narrative that comes together beautifully in a bloody, gonzo final act.

Within the slasher movie canon, there are the indisputable giants: Jason Voorhees, Freddy Krueger, Michael Myers. But what about Marvelous Mervo? Sure, he’s not the omnipresent icon that those other homicidal maniacs are, but there’s something to be said about a madman who’s played by eccentric ’80s music star Tiny Tim dressed like a clown and who leaves victims’ bodies hanging upside down in a barn like cattle.

If that sounds weird enough on its own, just wait until you experience the entirety of BLOOD HARVEST, one of the strangest ’80s slasher movies you’ll ever see. BHFF is thrilled to host the world premiere of a newly restored print of director Bill Rebane’s unnerving and often uncomfortably hilarious oddity, courtesy of Vinegar Syndrome. Full of gnarly kills, Tiny Tim’s signature brand of weirdness, and relentless unpredictability, BLOOD HARVEST is ripe for watch-it-with-a-rowdy-crowd rediscovery.

For the first time ever, the Brooklyn Horror Film Festival is excited to present a mystery film, and, sorry, we won’t give any easy-to-solve hints for all of you proud cinema sleuths out there! Okay, fine, we’ll give you a little something: Our inaugural “Secret Screening” film will either be a can’t-miss new horror gem that everyone, both genre folks and general film lovers alike, will be talking about for years to come or an unexpected yet prescient genre classic from deep in the vaults. Sorry, that’s all you’re going to get. Now let the speculation begin!

Drunk Education returns to the Brooklyn Horror Festival for another absolutely not TED-affiliated discussion of some of our favorite horror tropes. This year, we worship at the altar of religious horror. Why are nuns so spooky? Is there something inherently scary about churches? Join a star lineup of writers, critics, and producers as we get to know the devil with Heather Buckley, Karen Han, Kristen Yoonsoo Kim, and Anya Stanley. 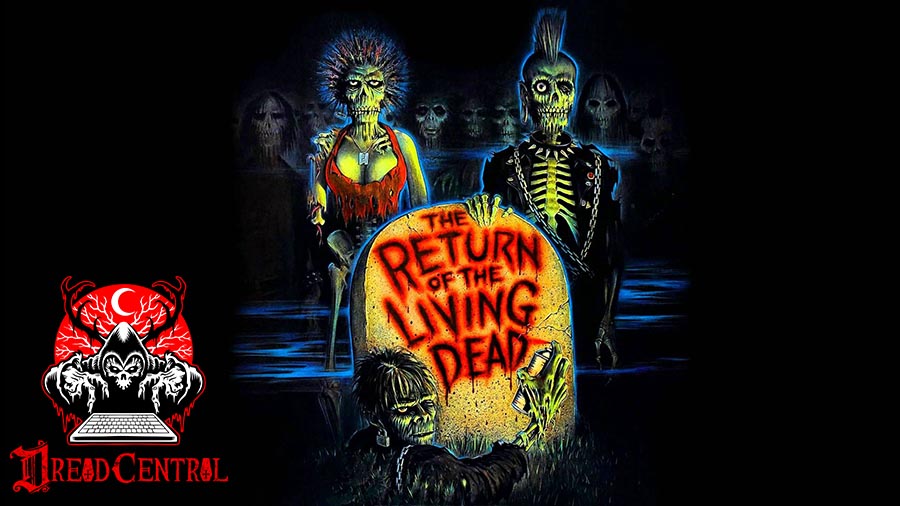 Drinking with the Dead: The Return of the Living Dead

Are you a gore-drenched horror nut with an unquenchable thirst? Matt Donato’s “Drinking With the Dread” series on Dread Central will cure (or cause) what ails ya! Each month Matt shines a spotlight on notable party-horror ragers best watched with friends, zero judgment, and a towering stack o’ booze. Follow the rules, drink when instructed, and just maybe you’ll make it through the night alive.

As part of this year’s Brooklyn Horror Film Festival, Dread Central will be hosting a live “Drinking With the Dread” drink-along game at Williamsburg’s Videology Bar & Cinema. To which movie, you ask? Dan O’Bannon’s punk-panic midnight masterpiece THE RETURN OF THE LIVING DEAD. Rules will be provided and explained upon entry, all of which have been carefully curated and irresponsibly tested by Matt to ensure a buzzworthy slice of horror gratification. Come out and rave to the grave with Dread Central, Brooklyn Horror Film Festival and a cemetery full of corpses hungry for brains. You might even earn a free beer by correctly answering horror trivia beforehand! 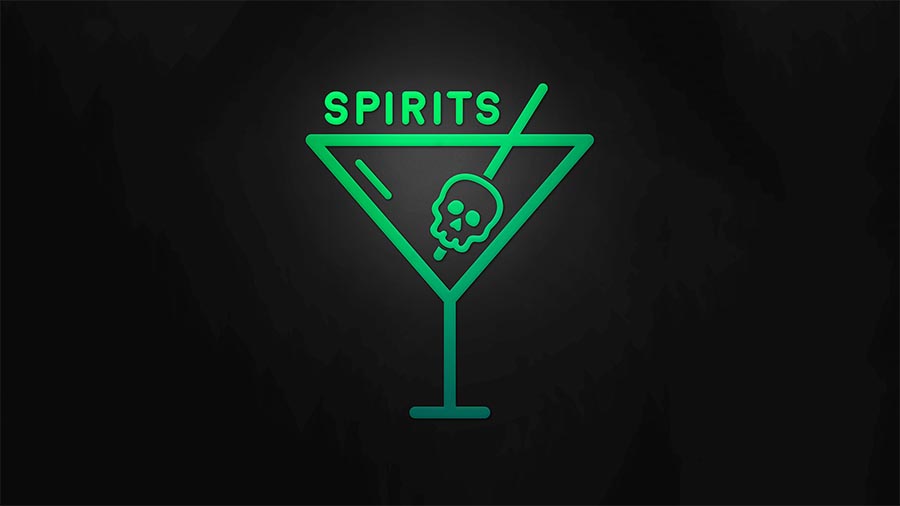 Spirits is a mythology, folklore and urban legends podcast hosted by two New Yorkers, Amanda McLoughlin and Julia Schifini. In this special live performance, learn about some of the more famous New York-area monsters and hear first-hand accounts of local urban legends. It will be creepy. It will be cool. It will be Spirits: LIVE!