‘Tales from the Hood’ Welcomes You to Hell M*therf*ckers 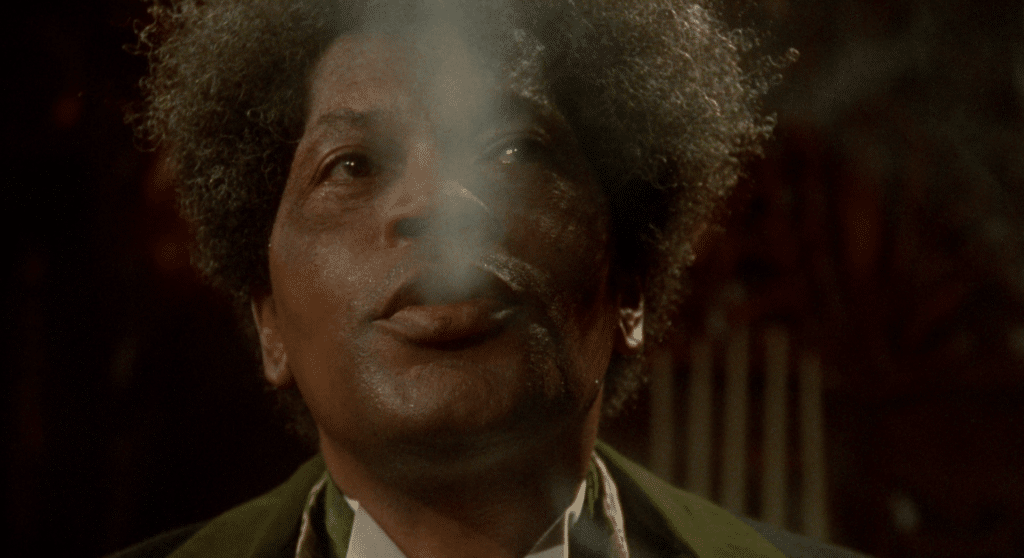 Great horror anthologies are hard to come by these days, but luckily there are still plenty to be rediscovered thanks to home video labels like Scream Factory. 1995’s Tales from the Hood is a highly entertaining blend of horror and social commentary from director Rusty Cundieff (who co-wrote alongside Darin Scott who also co-wrote an earlier horror anthology From a Whisper to a Scream), and it’s now found a new home on Blu-ray. Keep reading as we take a look at the film and new Collector’s Edition Blu-ray.

As with all the best anthology films Tales from the Hood features a wraparound tale (“Welcome to My Mortuary”) from which the individual stories are born, and the script couldn’t have chosen a better setting. Three gang-bangers come to a mortuary to pick up a shipment of drugs, and while they’re creeped out by the place and the mortician, Mr. Simms (Clarence Williams III), the lure of a drug haul is too powerful to resist. Before handing over the goods he brings the young men on a tour and shares a handful of stories he claims explain the various corpses.

First up is a tale (“Rogue Cop Revelation”) of three white cops (including Wings Hauser) who pull over, beat, and kill a black politician who’s been leading the charge against police corruption. One year later they find themselves at the man’s grave site only to discover too late that the man they murdered is hungry for revenge. The story is visibly influenced by the reality of Rodney King (which occurred four years prior) with scenes of police brutality set to Billie Holiday’s “Strange Fruit.” It’s a straight forward tale of revenge from beyond the grave, but solid stunt work and a fun mix of special effects elevate its message of accountability and responsibility in entertaining ways.

Next up is a story (“Boys Do Get Bruised”) about a little boy who’s being bullied at school and abused at home. He claims the latter is being committed by a monster, but while his teacher tries to discover the truth the boy finds his own way of dealing with the problem. The highlight here is seeing David Alan Grier play a violent asshole – and seeing what becomes of him – but it’s ultimately a slight and obvious slice of wish fulfillment.

Story three (“KKK Comeuppance”) features a racist politician (Corbin Bernsen) who takes up residence in an old plantation while running for higher office. He’s ex KKK, but he still holds on to all of his racist ideals, and while the locals picketing outside can’t bring him down the ghosts of slaves who suffered in and around the house would like a word. This is a fun little tale of just desserts that reminds favorably of shorts from Night Gallery, Trilogy of Terror, and Stephen King’s “Battleground.”

The fourth and final tale (“Hard Core Convert”) follows a gang member whose life sentence after being caught up in a massive shoot-out is commuted for scientific experimentation. He finds himself in the custody of a female Dr. Frankenstein (Rosalind Cash) who subjects him to A Clockwork Orange-inspired sensory overload coupling images of America’s racist past – whites killing blacks – with his own present – blacks killing blacks. There’s a genre element at play here, but in a film filled with social commentary on race in America this is the most brutal and powerful in its charge against the futility of black on black violence in a world already stacked against them.

Tales from the Hood holds up extremely well in its stories, presentation, and themes. Some of the effects are dated, but there’s an undeniable charm in the way they balance the film’s heavier aspects and ideas. The movie’s marketing sold it as a comedic spoof of sorts, but while there are laughs here it’s a far more relevant and accomplished film than the trailers would have you believe.

Scream Factory gives Tales from the Hood a high definition transfer and includes a handful of recycled special features alongside a brand new, hour long making-of.