What I’ve Seen With Your Eyes: The Influences of ‘Blade Runner’

As a cultural stimulus, the influence of Ridley Scott’s original cannot be overstated. It christened a surge of Philip K. Dick adaptations, from Total Recall to Minority Report, to A Scanner Darkly. And its fingerprints are all over the gritty cyberpunk mouthfeel of Ghost in the Shell, Twelve Monkeys, Strange Days, Dark City, Brazil, and City of Lost Children, to name a few.

Blade Runner itself wasn’t created in a vacuum; even the great influencer has influences. Taking its name from a film treatment by William S. Burrough, Blade Runner is famously (and loosely) based on Philip K. Dick’s ‘Do Androids Dream of Electric Sheep.’ In a more elusive sense, Blade Runner has a foot in two classic cinema genres: one science fiction, the other noir.

We are offered a glowing neon world with video-interface pay-phones, fantastical genetic engineering, and flying cars—as well as a dreary, paranoid, hard-boiled detective story. Even Vangelis’ electronic drones dip into the smoking-room of melancholic sax riffs. Both genres are true at once and it works. There’s even an argument to be made that Blade Runner has elements of horror. Ditch Deckard, our world-weary film noir agent, and the film becomes a Frankenstein-like tale of a hubristic scientist whose creations have come back to haunt him.

In blending genres, Blade Runner is said to have a quintessentially postmodern aesthetic; a media melange that is greater than the sum of its parts. This blurring effect is echoed in a narrative and thematic sense too: in the uncertain tension between real and artificial, human and replicant, alive and decaying. In this way, Blade Runner’s intertextuality becomes fundamental to its primary conceit: that the distinction between what is and isn’t human behavior is not black and white, but rather something hazier, and perhaps more beautiful for it.

With that, let’s look at some of the media that influenced Blade Runner:

In Paul M. Sammon’s indispensable ‘Future Noir: The Making of Blade Runner,’ Scott remarks how he “was constantly waving a reproduction of this painting under the noses of the production team to illustrate the look and mood [he] was after.” The mood of ‘Nighthawks’ is predominantly an aching, thoroughly modern, and almost menacing sense of alienation. The species of isolation that, counterintuitively, comes with living in a big city. Coupled with the high-contrast moody lighting, and the result is something distinctly noir; something eery, cosmopolitan, and unsettlingly lonely.

The Voight-Kampff test, used to determine who is and isn’t a Replicant, has its origins in a famous artificial intelligence test devised by Cambridge Mathematician Alan Turing in 1950. The big crunchy idea of the Turing test being whether or not an AI can exhibit human behavior and convince a human that it is another human. While the test is, effectively, a better test of an AI’s ability to imitate human intelligence rather than properly think like a human, the questions raised by the Turing test ricochet throughout Blade Runner framework: are Replicants capable of empathy, or just something that looks like it? If they can feel for others, what are we to make of the implication that what makes us human is reducible to something programmed and manufactured? Every time I watch Blade Runner I am floored by Rachael’s aesthetic, which is immaculate in the proper sense of the word. It is at once vampish, commanding, and sleek; a femme fatale cocktail wafting of moral unease and billowing Boyards cigarettes. Rachel borrowed Joan Crawford’s furs and shoulder pads and made manifest what Scott referred to as Lamarr’s “spectacular severity.”

While Deckard’s arrival at the motor court was the only part of Blade Runner actually shot on location at the Ennis Brown House, the property’s influence is all over Deckard’s apartment. Literally. Set designer Charles William Breen made plaster casts of the house’s deeply textured glyphs and created walls out of them on set. Constructed in 1924, Wright’s house is quintessential Mayan Revival; an ancient fortress that is somehow also paradoxically modern. The influence of Mayan Revival can also be felt in the Tyrell Corporation’s ziggurats and might even go so far as to explain Deckard’s decorative sawfish rostrum. Turns out Joe Turkel and aerial shots from The Shining weren’t the only things Scott borrowed from Kubrick. In an interview with Wired, Scott explains how he had to find a way of subtly differentiating human beings from Replicants using what technology was available at the time. He wanted to “have light in their eyes in the way that the leopard’s [do] in 2001,” just a glint every now and then. To accomplish the desired effect, visual effects supervisor Douglas Trumbull implemented a technique involving specially angled lights and mirrors that astute readers might recognize this as a variation on Schüfftan process. Speaking of cinematic effects popularized by Metropolis… Much has been made of the family resemblance between Blade Runner and Metropolis; of their shared prophetic visions of a technology-saturated future; their concern for the ways said technology instrumentalizes human activity; their vertical class structures; their astonishingly stylish and architecturally dense skylines. To say nothing of Metropolis’ robot with a bespoke human likeness. According to Sammon’s ‘The Making of Blade Runner,’ visual effects supervisor David Dryer used stills from Metropolis when lining up shots of Blade Runner’s miniatures. No small coincidence then.

Antonio Sant’Elia is not a household name. He died at 28 years old in 1916 with only one completed building. That said, if you’ve seen Blade Runner or Metropolis, you’ve seen Sant’Elia’s work, or at the very least, its ghostly influence. He may have constructed only one building, but he left behind a design for an entire city: the fantastical vision of Città Nuova. Designed as “the architectural remedy to Modernism’s perceived disconnect from lived experience,” Sant’Elia’s work is encoded into the mountainous verticality of Blade Runner’s LA—into its immensity, its pace, and its technocracy. According to his commentary track for Blade Runner’s “Final Cut,” Scott intended for the opening shot of Morgan Paull’s blazing eyeball to be a minor gesture towards Big Brother, everyone’s favorite symbol of authoritarian voyeurism. Only makes sense that Scott would return to Orwell more explicitly one and a half years later in that very famous Apple Macintosh ad he directed.

‘The Long Tomorrow’ from Métal Hurlant 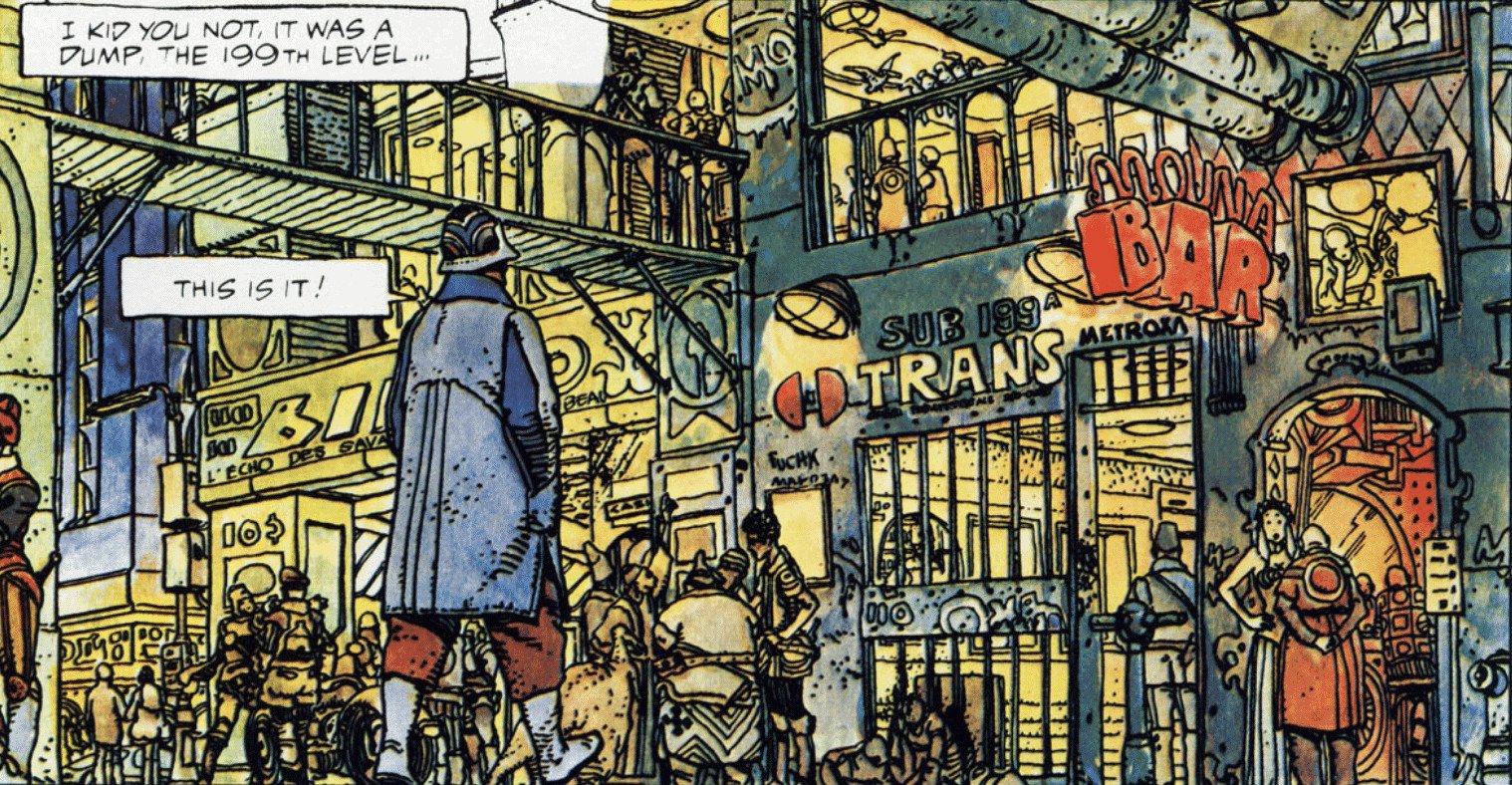 Métal Hurlant was the kind of publication that contained essays from the likes of Harlan Ellison, William S. Burroughs, and Stephen King; and that featured interviews with John Waters, Captain Beefheart, and Frederico Fellini. It was also, perhaps most importantly, responsible for broadcasting the inconceivable genius of Moebius, forever altering the visual landscape of popular science fiction. One of Moebius’ most revolutionary works for Métal Hurlant was a short comic he published in 1975 with Dan O’Bannon titled ‘The Long Tomorrow.’ It served as a key visual reference for Blade Runner, fusing classical hard-boiled detective elements with a proto-cyberpunk vision. Scott asked Moebius to come on board during Blade Runner’s pre-production, but the artist refused due to a scheduling conflict. Alas.

With a sequel imminent, here’s to hoping there’s more intertextuality to come.