One day we will see this as a turning point for superhero movies and cinema in general. The idea of an Oscar-caliber R-rated character-driven drama that just happens to be populated with figures from popular comic books is going to continue heavily through the next decade, especially after Joker‘s box office success. Logan proves that you can sell anything as long as a favorite superhero IP is involved and that you can then get away with delivering a well-written story (on the level of an Oscar-nominated screenplay, as written by James Mangold, Scott Frank, and Michael Green), impeccable direction from a filmmaker of Mangold’s talent, and the sort of strong performances we’ve known Hugh Jackman and Patrick Stewart capable of but had seemed unlikely in the arena of the X-Men franchise they’d been a part of for nearly 20 years. Logan isn’t just a spare drama with Western influences, though. There’s plenty of action and sci-fi futurist concepts and magical mutant superpowers and heroes fighting their evil doppelgangers. There are also serious stakes and inclusive casting and character development. And then, of course, there’s little newcomer Dafne Keen wowing us as a Wolverine mini-me. Fox’s Marvel franchises have given us some of the worst sci-fi/fantasy of the decade, so it’s crazy they also made one of the best — and the best of its wide-encompassing subgenre. What if you were forced to move to Mars, but the ship you were sent on was knocked off its course with no remedy for readjustment? Moreover, what if that ship had thousands of people on it, and no one had any idea when they might get off? Things might get a little weird. Pella Kagerman and Hugo Lilja’s depiction of a hi-tech space-locked emergency drawn out over years is jaw-dropping and hypnotizing. The concepts alone will stop you in your tracks. Consider “Mima,” a never-explicated substance that looks like an upside pool of lava and lures the passengers of the ship into a visionary trance, which fills them with dreams of nature and concomitant peace. What would we do with a thing like that? Form a religion around it? Overdose to unknown effects? Use it as a weapon? It’s overwhelming to begin even thinking about conveying all of the complex and previously unimagined concepts posited in Aniara, a tiny Swedish film that somehow looks like it had the budget of a Star Wars movie. But it’s not hard to encourage everyone to watch it with the infused severity of a life or death situation. Among everything else, it’s a rare bastion of queer cinema. (Luke Hicks) Jim Jarmusch has a skill for unlocking savory combinations of otherwise disparate moods and connecting them with artistic ease. In the case of Only Lovers Left Alive, we find ourselves at the intersection of the dark, divey, underground noise rock scene of present day Detroit, the ornate and melodic droning of Moroccan nights, vampirism, and, as always, the depressing yet enticing spiritual dalliance of romanticist poetry, especially that of William Blake. It’s nice to see vampires in a situation that doesn’t assume their villainy or even their interest in it. Jarmusch’s vampires are lovelorn artists who have a deep infatuation with the Earth that’s kept them for so many hundreds of years and an even deeper disdain for the humans who plow it. But, they’re primarily peaceful creatures, attaining their blood in vials from hospitals and holing themselves up from human interaction so as to not be tempted. The aural sludge-fest (scored by Jarmusch’s band, Sqürl) is a gloomy romantic delight. (Luke Hicks) Early on, the internet speculated that Christopher Nolan‘s mysterious follow-up to The Dark Knight would be another installment of his Batman series. The movie had cast enough actors from that franchise, and Leonardo DiCaprio was rumored a possible choice for the Riddler. Fortunately, Inception was really a diversion from the Dark Knight films and kept us assured of the filmmaker’s imagination outside the limitations of DC comic book movies. Indeed, Inception is one of the more visionary movies of the decade, even if its originality of premise has been questioned next to the animated film Paprika. Led by DiCaprio, Inception takes us down a rabbit hole into the Matryoshka-like structure of astonishing set pieces within set pieces within set pieces as it follows a heist inside a multilayered dreamscape. It’s a rather cold and calucated effort, but amazing visual effects and a quickly iconic sound design (BRAAM!) combine for at least one of the most fabulous cinematic distractions of the last 10 years. (Christopher Campbell) One of several arthouse vehicles for Robert Pattinson in 2019, Claire Denis’ High Life might not even be the strangest, which is saying a lot for a film with a bonified “fuck box” that services all genders exquisitely (and even cleans up afterward), a witchy scientist Juliette Binoche, and a central, unfolding mystery that’s bound to perturb you. To amplify its singularity, Denis set the film on a droll rectangular prism spaceship that both stands for and is an extension of the grave injustice of the institutional prison system. Yet she manages to capture some of the most luscious imagery of vegetation despite the confines of her setting. Time isn’t linear, people aren’t predictable, and no one is safe from themselves. It’s a must-watch film, and, at the expense of sounding privy to recency bias, it might be Denis’ best. (Luke Hicks) Roger Deakins always shows up. He’s Roger Deakins. But no one’s ever given him the platform to flaunt his every colorful whim like Denis Villeneuve. In his sequel to Ridley Scott’s 1982 masterpiece Blade Runner, Villeneuve capitalizes on the style and aesthetic of the world Scott (and original short writer, Philip K. Dick) envisioned. Through the lenses of Deakins, whose work catapults an otherwise still-impressive film into the forefront with its constant flurry of perfect shots that warrant a pause-rewind, Villeneuve was able to craft one of the few major studio follow-ups that isn’t a creatively bankrupt cash grab, and cinema is better for it. Why it failed to draw the average viewer to the screen is a bit of a mystery, but there’s no doubt time will treat Blade Runner 2049 well. It’s an astonishing achievement across the board. (Luke Hicks) Writer-editor-composer-producer-cinematographer-director Shane Carruth is an enigma in the truest sense of the word. No one’s sure what he’s doing, or where he’s been, or when he’ll be back. But we’re all waiting in eager anticipation after Upstream Color, his last film, which was as enigmatic as he is. At its foundation, it’s a romance, albeit one that leeches onto you after an incredibly confusing downfall of sorts at the hands of a thief who weaponizes a soporific worm, as thieves do. It never follows conventional storytelling methods or even totally intelligible ones, but it’s hard to look away from. Every image is a piece to a puzzle that you feel desperate to complete. And when you finally do (even if it takes numerous essays), the big picture will wow you. (Luke Hicks) 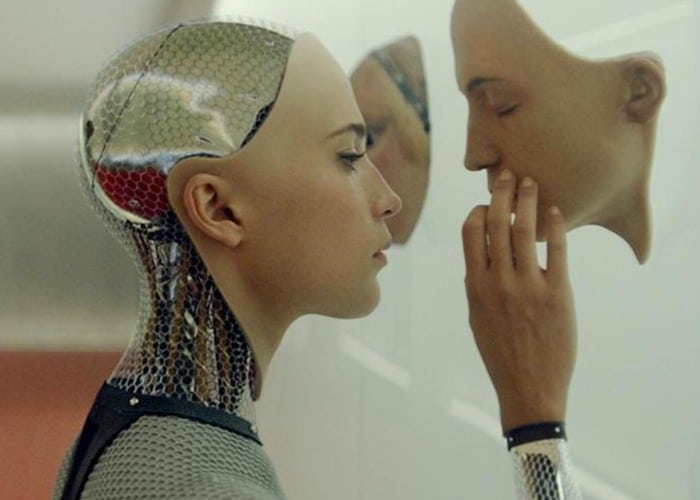 Alex Garland wrote four screenplays in the 2010s and all of them ended up on this list. The guy knows how to craft a sci-fi script whether he’s behind the camera or not. As his directorial debut, Ex Machina made him a much more notable name. Why? Primarily because we realized that his screenplays were better off in his own hands than in someone else’s, but also because Ex Machina is one of the strongest stories he’s written. Domhnall Gleeson, Alicia Vikander, and Oscar Isaac ground an ethical sci-fi scenario for the ages that interrogates the agency of artificial intelligence, heightens the fugitive nature of technological genius, and resides in a minimalist Scandinavian paradise. It’ll keep you on the edge of your seat until the final frame. (Luke Hicks) My first impressin of Sorry to Bother You based on its premise and initial marketing was that it would be yet another example of a kind of Charlie Kaufman-by-way-of-Michel Gondry-lite fantasy that’s been springing up here and there throughout the first two decades of the 21st century. Only this one would have some racial commentary as opposed to the usual meta narrative. But this feature debut from writer-director Boots Riley goes above and beyond expectations with its dark satire of where we’re heading with regards to labor and consumerism. If Jordan Peele is a new Hitchcock for racially and socially interested horror and sci-fi material, than Riley is the modern Capra with Lakeith Stanfield as his Gary Cooper taking on social and political and economic issues but veering more into the bizarre and disturbing. This one is still too new to spoil, but the Pinocchio-esque twist shall haunt me through the next decade. (Christopher Campbell) No one was expecting the monster disaster picture Cloverfield to develop into a genre-varying iteration of a modern franchise, just like no one was expecting that franchise to absolutely blow it with its third installment, The Cloverfield Paradox. But between the two less noteworthy movies (the former infinitely outpacing the latter) was 10 Cloverfield Lane, a compact and cloistered tangent from the sprawling, explosive destruction of the first chapter. By inserting “Cloverfield” in the title, the claustrophobic bunker thriller brilliantly preys on your awareness of the first film, which allows you the insight of an alien invasion if and only if the world you find yourself in happens to be the same one as the first, which, of course, isn’t confirmed or denied until the very end. Dan Trachtenberg’s film did everything right, from its casting of John Goodman and Mary Elizabeth Winstead to its heart-stopping title card sequence (best of the decade?) to its tagline, “Monsters come in many forms,” which resonated with the cultural rise of the then-fresh #MeToo movement. (Luke Hicks)