Timo Tjahjanto’s heavenly Indonesian actioner is essentially a series of mindblowing stunts, most of which could make this list. However, the best one sees a gangland goon being flipped out of a window and breaking his body on a concrete slab below, and it just looks so dangerous and brutal. I don’t know how they pulled it off, but a brave human being fell from a great height to make it happen. The Raid’s action appears to unfold in real time, but it was the result of well-placed cameras, plenty of rehearsal, and multiple takes. This stunt took four days to shoot and saw both performers wired up as they fell from a window onto a balcony below. The speed of the fall, coupled with the fact that the actors had to land in such a tight space, was no easy feat to pull off. But there’s no denying that their efforts paid off and then some in the end. The Transformers movies aren’t great, but sometimes there are nuggets of gold to be found in the garbage. This skydiving stunt from Dark of the Moon is incredible. The filmmakers tapped JT Holmes and his group of “birdmen” to jump from an aircraft and fly through the Chicago skyline in tandem, avoiding skyscrapers along the way. The scene features some CGI robots and explosions, but this stunt was all real. Toward the end of the movie, the titular hero falls from the roof of a building to the alleyway below. During the drop, he gets ping pong’d between the balconies of the neighboring buildings. No person could survive a fall like this in real life, but what you see on the screen here isn’t entirely fake, either. The stunt saw Reeves’ stand-in, Jackson Spidell, fall from a replica scaffolding that was kitted with rubber pads to keep him alive. The terrifying way that his body twists and turns actually happened, too, and it looked rather painful. For this stunt, the filmmakers were given access to a Tenerife highway to have some fun. They made the most of it. The tank in question was modified to travel at 60 mph, and real vehicles were left on the road to give it some machinery to destroy. CGI was used to scrub out nearby buildings, and for the scene where Roman (Tyrese Gibson) leaps into another car after his own vehicle experiences destruction. To achieve realism for this scene, visual effects supervisor Christopher Townsend and second unit director Brian Smrz recruited the Red Bull Skydiving Team to portray Iron Man, the civilians, and to film the drop as it happened. Parachutes were hidden under the team’s clothes, but they reportedly performed the jump without goggles in heavy windstorms up to eight times a day. For the sequel to the 2011 action hit, the filmmakers set out to expand the scale by delivering an array of ambitious set-pieces. This included a car chase scene where several cars are destroyed. On top of that, a motorcyclist jumps onto a speeding car and holds its window for dear life. Then, during the final moments, star Iko Uwais leaps from the trunk of a moving vehicle onto the front hood of another. He makes the stunt look so simple, but if he didn’t land successfully, he would have been crushed by the vehicle. 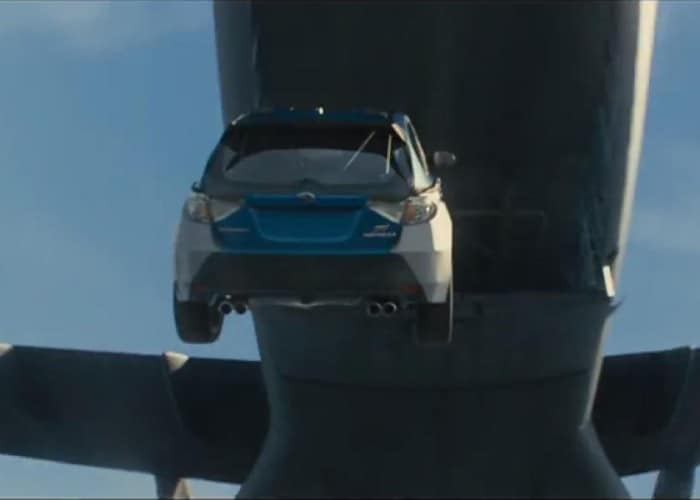 During these moments of pure cinematic magic, we see the film’s heroes drive out of a cargo plane in their cars, which are equipped with parachutes, and land on the road below and drive away. While CGI was necessary to add the cast to their vehicles, the stunt saw real cars being dropped from an aircraft, while skydivers with cameras filmed the drop. However, the scene where everyone hits the ground and drives away was accomplished by hoisting their cars above the ground and lowering them.