Because there’s nothing scarier than the way we’ve messed up the planet.
By Meg Shields · Published on October 18th, 2019

So, not to be that guy, but how are all ya’ll coping with the grim reality that we’ve probably got 12 years left before the planet shits the bed and we start to die slowly in a hell of our own making? I’m a goon who writes goofy internet articles and I don’t have the answers, but I will say this: relief from the crushing existential dread would be nice, but I don’t want to ignore what’s happening.

Horror, like satire, is a genre that can help us confront and sit with difficult truths we’d rather not think about. I’m not saying that schlockfests like Prophecy or The Stuff aspire to such lofty heights, but they don’t shy away from the fact that human beings mistreat the planet and there will most assuredly be a price to pay.

There are some interesting things worth noting about this list. First, we have two entries from South Korean heavy hitter Bong Joon-ho, who has distinguished himself as a (if not the) genre director preoccupied with the consequences of human consumption, resource abuse, and animal cruelty. Also, while the writers behind these lists have a soft spot for the 80s, this list is chockablock full of late 70s entrants. Which makes sense given that the 70s were full of pollution scandals that eventually led to an increased public consciousness about human impact on the earth.

Speaking of which, if you’re looking for a genre watchlist, lean into the daily terror that claws at your soul about the planet dying, we’ve done the work for you. Keep reading for a look at the top ten eco-horror films as voted on by Anna Swanson, Brad Gullickson, Chris Coffel, Jacob Trussell, Kieran Fisher, Rob Hunter, Valerie Ettenhofer, and myself. Mysterious ooze is discovered bubbling out of the ground? God damn right Americans will eat it up as long as it’s marked properly. What’s that? It’s generically called The Stuff? But it’s being called a dessert right? Then that’s good enough! Larry Cohen’s biting satire is mostly known for taking on American consumerism, specifically our love affair with junk food. Hidden in plain sight is a message on the dangers of effing up the environment. Sure, we can frack the ground and get oil and that oil can have positive benefits in the short-term, but long-term we run the risk of encountering negative side effects. Did I say oil? I meant delicious yogurt-like snack food! Don’t be dumb, people. Be like Greta and follow the wise wisdom left to us by Larry Cohen. (Chris Coffel) Saul Bass is best known for his memorable title/poster designs, but he also directed a single feature film that deserves the same kind of praise Charles Laughton receives for his sole directorial effort. Phase IV is a fascinating look at the rise of ants as witnessed by two scientists who understandably think they’re well beyond the insects’ reach before discovering that humans aren’t the only creatures capable of evolving. The film plays almost like a documentary of humanity’s demise, and it’s a mesmerizing and thrilling warning about both our hubris and our ignorance. (Rob Hunter) Hate on found footage all you want, but when done well, it can capture a type of immediacy in horror that a traditional narrative could never do. It can make things feel alive and, more importantly, real. And while I don’t necessarily believe that sea bugs that can eat out your tongue and replace it with their own bodies will grow large enough to infect humans, I can tell you that thanks to The Bay it would be absolutely horrifying. Directed by Barry Levinson, of all people, the film dips into eco-horror territory through a tale as old as time: governmental inaction. After scientists find the titular bay polluted, the mayor turns a blind eye, allowing the parasitic virus to spread. Levinson uses the found footage aesthetic to build an ensemble out of news reports, cell phone footage, and home movies expanding the subgenre’s typical scope from a singular point of view to multiple. Levinson originally envisioned The Bay as a documentary chronicling the real-life environmental issues surrounding the Chesapeake Bay, opting instead to make a horror film, because what better way to spark action than by scaring the shit out of people. (Jacob Trussell) 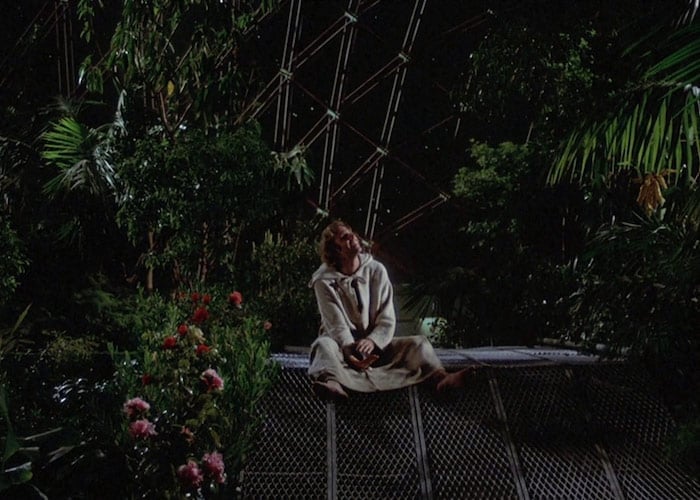 Directed by 2001: A Space Odyssey’s Douglas Trumball, Silent Running came out in 1972 and because we’ve made, uh, bad choices about how we’ve treated the planet, it’s only become more relevant, and horrifying, with age. It’s the future: what survives of Earth’s plant life has been preserved in greenhouse-like domes attached to a large space freighter called Valley Forge. Freeman Lowell (Bruce Dern), a deep-space ecologist, takes care of the plants so that one day they can be used to reforest the planet. Then the crew receives word that Valley Forge has been reclaimed for commercial use, and they have orders to jettison the domes. Lowell rebels at the expense of his fellow crew-members. Eerie in both its atmosphere and plausibility, Silent Running is a melancholy, unpretentious film about a terrible and uncomplicated predicament: when to hold on, to let go, and how to make peace with the consequences of choosing either path. (Meg Shields) Oil is one helluva a good excuse for a whole lotta evil. We’ll basically accept whatever it takes to keep our tiny little boxes running on the road. Sure, fine, whatever. That statement could easily be dismissed as liberal doomsayer hogwash. How do two opposing sides come together on an issue like climate change? Writer/director Larry Fessenden knows. You gotta plop a Wendigo in the middle. Only in the face of supernatural catastrophe will the ignorant shut up and listen to the horrors bubbling up from the Earth. In the collision of viewpoints, action or reaction can be found. Bring humanity to the brink of death, and we’ll discover regret. The Last Winter attempts a hard slap on its audience, but maybe only a 4D experience with tragedy can actually result in positive change on this planet. (Brad Gullickson)