The cat’s dead, but we got the details now.
By Brad Gullickson · Published on October 28th, 2019

Look, Stephen King’s Sleepwalkers didn’t make the cut. Don’t bother skipping ahead, the film is not there. I tried, but the math didn’t add up in its favor, and we here at The Boo Crew are strict adherents to logic and math. We can’t let emotions get in the way of facts. So, no Sleepwalkers. We’re sorry, but no one will speak for Clovis and his bravery. These other ten chunks of hairball horror are just a teeny bit gnarlier than the Mick Garris killer kitty cat incest extravaganza. Weird, but true.

Curious to see how that is possible? Well, you know what they say about curiosity, right? Keep reading, but stay close to your litter box. You may loose a pebble or two sifting through these fancy feasts selected by Chris Coffel, Valerie Ettenhofer, Kieran Fisher, Rob Hunter, Meg Shields, Anna Swanson, Jacob Trussell, and yours truly. The history of storytelling is full of bad guys with cat sidekicks, but few of these felines are as ferocious as Graymalkin, who does the bidding of the occultist Julian Karswell (Niall MacGinnis). In one of the film’s most notable scenes, the kitty turns into a panther and attacks Holden (Dana Andrews), the film’s protagonist, in the library as he looks for a way to overcome his cursed fate. The scene is one of many nightmare-inducing moments in this British horror classic. (Kieran Fisher) I don’t know about y’all, but all I want out of cat horror are cats killing people. That’s all! So you could say then that Lucio Fulci’s extremely loose adaptation of Edgar Allen Poe’s The Black Cat is the purest form of what you want from the catsploitation genre. Not only do you get a cat doing some sinister shit, but Fulci has also turned the titular villain into what’s ostensibly a supernatural slasher movie. Not only does it have razor-sharp claws, but it’s psychic, can teleport, and has the wherewithal to know just when it needs to scratch its victim so they’ll be perfectly impaled on sharp rebar. The Black Cat gets routinely overlooked for Fulci’s gorier, sexier films but don’t let the lack of half-naked women vomiting up their guts stop you from seeking it out. It’s restrained Fulci, focusing on establishing an evocative, brooding atmosphere while speckling it with shocks of cat-on-man violence. (Jacob Trussell) What’s scarier than one ferocious cat? Dozens of them, obviously. Let The Right One In runs rife with killer cat content, particularly when a horde of cats attack a woman who is, unbeknownst to her, in the process of transforming into a vampire. As they often do, the cats sense that something is amiss long before any people do, and they respond accordingly. This is an unnerving attack scene that reminds us that Let The Right One In may be most well-known for its vampires but also deserves some recognition for its fang-bearing creatures of the feline variety. (Anna Swanson) 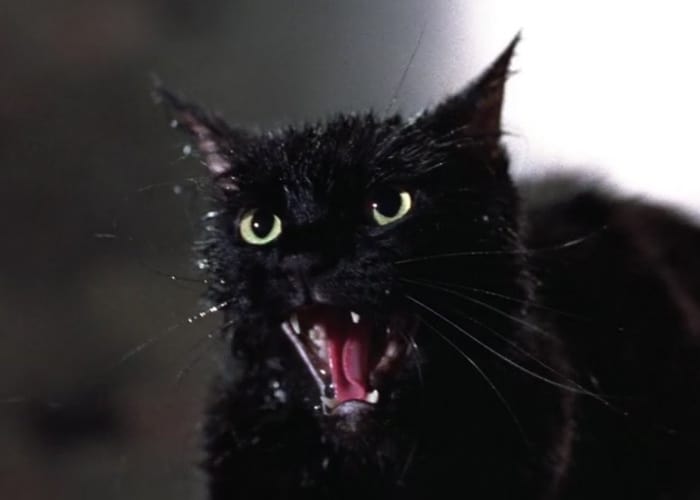 Listen here. If we didn’t include the “Cat from Hell” segment on this list, we would all have to go to horror movie nerd jail. And I hear they don’t have wifi. Based on Stephen King’s short story of the same name, “The Cat from Hell” follows Drogan (William Hickey), an old man who has hired a hitman for something of an odd job: to kill a cat. With multiple animal-testing deaths on his hands, Drogan believes the vengeful feline is behind three human deaths, and he has no interest in becoming the fourth. What happens next is best left unsaid in case any of you have yet to glimpse the segment’s gleefully horrific aftermath, but suffice to say: it gives a whole new meaning to the phrase “cat got your tongue.” (Meg Shields) Lucio Fulci‘s later films aren’t remembered as fondly as his early works, but that’s mostly because people are dumb. Look, I acknowledge that not all of his work is great and towards the end, he hit some rough patches, but a Fulci film is like pizza — even when it’s bad, you’re still eating pizza. His 1990 effort, A Cat in the Brain, is a bit of a precursor to Wes Craven’s New Nightmare and is often described as the horror take on Fellini’s 8 1/2. Fulci plays a version of himself and the story is a reflection on his career as a director that takes a look at how his work has impacted his psyche. The cat in the film’s title is a bit of a metaphor with the director suggesting that the toll he takes from his films is like having a cat in the brain. But this is Fulci so we do get to see a cat literally chomping away on his brain. And if a cat eating a brain isn’t catsploitation, then I don’t know what is. (Chris Coffel)