October is defined in Webster’s Dictionary as “31 days of horror.” Don’t bother looking it up; it’s true. Most people take that to mean highlighting one horror movie a day, but here at FSR, we’ve taken that up a spooky notch or nine by celebrating each day with a top ten list. This article about the 50 best ’80s horror movies is part of our ongoing series 31 Days of Horror Lists.

Ah, the ’80s. There are fantastic horror films from nearly every year since cinema began, but for many fans, the genre’s output doesn’t get any better than it did in the ’80s. The rise of practical effects and the artistry on display from masters like Rick Baker, Rob Bottin, Stan Winston, Screaming Mad George, and others played a big role, but equally important was the sense of fun that infused horror movies. Plenty of serious, soul-crushing horrors were released in the ’80s too, but the decade really saw the genre find an interest in delivering pure entertainment too.

We’re wrapping up this year’s 31 Days of Horror Lists with a big, bangin’ list of the 50 best horror movies of the ’80s. That might sound like a lot, but we could have easily made this list two or three times bigger. Pet Sematary, Pumpkinhead, Tenebrae, Friday the 13th, The Monster Squad, The Hidden, Angel Heart, Maniac, Dead Ringers, Waxwork, Anguish… none of these made the cut for the top 50. Can you believe that not even Michael Mann’s The Keep survived the voting process?! The list of movies that didn’t make the top 50 would make a great top 50 in their own right. That’s bonkers, but it goes to show just how many fantastically beloved horror films there are from that magical decade.

Now please join me and the crew (Chris Coffel, Valerie Ettenhofer, Kieran Fisher, Brad Gullickson, Meg Shields, Anna Swanson, Jacob Trussell) as we close out this year’s celebration with our picks for the 50 best horror movies of the ’80s! 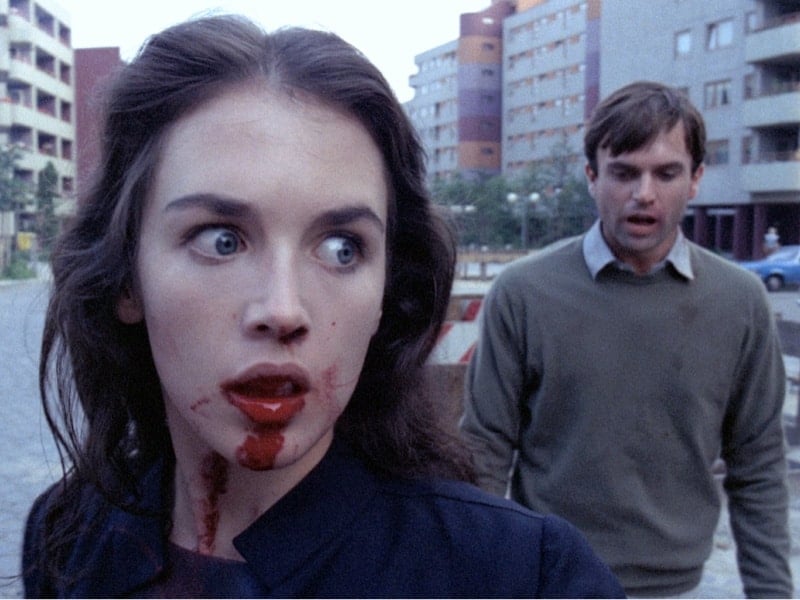 The fact that my personal number one pick for the best ’80s horror movie only landed in the fiftieth spot either says something terrible about our voting system or something incredible about the overall quality of films made in the decade. Let’s generously assume it’s the latter. Possession, perhaps alienating in its apparent freneticism, is unlike any other movie made in the ’80s. Or before the ’80s. Or since the ’80s.

Andrzej Żuławski’s masterpiece is turbulent and unnerving, yes, but the director has firm control over every frame. In this tale of a family in ruins over infidelity, paranoia, and… something else… the film abounds with gripping thrills and edge-of-your-seat scares. It also features one of the most fearless performances committed to celluloid courtesy of Isabelle Adjani. To say anything more would be to give the goods away, so let’s just say Possession is a film that has to be experienced firsthand (and hopefully as soon as possible). (Anna Swanson) Here’s a movie that Disney wants you to forget. So much so that we probably won’t see it on Disney+ until all of the horror elements have been edited out by the fun police over at the House of Mouse. It’s a crime that it isn’t on the streaming service to introduce youngsters to horror. Then again, this adaptation of Ray Bradbury’s creepy carnival tale gives most adult horror movies a run for their money in the fright department.

Something Wicked This Way Comes boasts some very effective sequences, including a nightmare-inducing one involving spiders. The atmosphere is wonderfully eerie and carnivalesque, making for perfect viewing around the Halloween season. And every other time of year, for that matter. (Kieran Fisher) Friday the 13th: The Final Chapter ends with a young Corey Feldman, as Tommy Jarvis, shaving his head in an attempt to disguise himself as Jason Voorhees. Why does he do this? Well, so he can distract Jason by connecting with Jason on a personal level. And then kill him with a machete. And then when he’s not quite sure that Jason is dead, he repeatedly hacks away at him while screaming “die! die!” over and over again. Tommy’s approach is a smart one because far too often would-be victims just assume the killer is dead.

This is also one of the greatest endings to any slasher of all time. The build-up to it is pretty great too. The Final Chapter — what a lie this title proved to be — features some of Jason’s best kills, including a spear-gun to the crotch, and then there’s Crispin Glover and his wild dancing. What is he even doing? It doesn’t matter. This fourth installment in the Friday the 13th franchise is easily the best of the bunch. (Chris Coffel) People slash themselves with razor blades, others convincingly wear full-body skin suits, a doctor goes into a Cenobite Easy Bake Oven and comes out with tentacle-knives for hands, and the entire climax takes place in a brutalist, M. C. Escher-esque labyrinth with an elaborate concrete design, countless stairs, and an unending sense of scale. If that doesn’t scream, “This movie was brought to you by cocaine,” I don’t know what does! The original Hellraiser may have introduced us to Barker’s incomparable creations, but it is Hellraiser II that turned those creations into enduring, fan-favorite movie maniacs. (Jacob Trussell) You can’t discuss Maximum Overdrive without talking about cocaine. It’s a helluva drug, and apparently, the delicacy of choice by the director at the time of the film’s making. Stephen King dare not blame his own mind for such a ridiculously strange movie, but let’s be real, cure the madman author of his addiction and the sober result would be just as ridiculous. Machines turn on their masters — cars, trucks, vending monstrosities. Even the watermelons get in on the head smashing. It’s eighties excess at its most flagrant and offensive. Bang your head to the AC/DC soundtrack. Take a big snort and let it take over. (Brad Gullickson) Everyone loves a good horror anthology, but so few filmmakers can deliver one. The genre format had its heyday back in the ’60s and ’70s with production outfits like the UK’s Amicus leading the way, but they quickly stumbled after that. Quantity rose, in part because they’re budget-friendly, but quality dipped. There are standouts, though, and the granddaddy of those highlights is 1982’s collaboration between George Romero and Stephen King.

The tales are brought to life with a glorious EC Comics vibe, comic book panels, and all, with tongue firmly planted in cheek the film manages to deliver some truly memorable segments involving reanimated corpses, alien moss, killer bugs, and more. The tone may not be for everyone — the film loves a laugh — but fans of old school Tales from the Crypt-style antics can’t help but fall in love more and more with each re-watch. (Rob Hunter) Come to think of it, there’s more than one “Fat Lip” in Yuzna’s Society; stretched, dissented, and slippery in the masterful hands of practical effect wizard Screaming Mad George. Society gets a reputation for being weird and gross, which it is. But beneath all the slime and shunting, it’s a riotous skewering of the wealthy elite and their weird, kinky slug-eating sex parties. (Meg Shields) When people talk great werewolf movies they often zero in on 1982’s legendary doubleheader of An American Werewolf in London and The Howling. Both films are all-timers for a reason, but if talking top-five werewolf flicks you’re a tool to not include this mid-80s romp based on a novella by Stephen King (“Cycle of the Werewolf”).

People think just because it stars Gary Busey as a fun uncle and Corey Haim as a wheelchair-bound teen prone to pranks that it’s somehow a lesser effort, but that mentality blows. This is a fun flick that finds great character beats alongside its suspenseful monster sequences. Sure, the creature’s practical makeup can’t compete with the work of a Baker or a Bottin, but it’s still a great time in King country thanks to a commitment to deliver an entertaining slice of horror. (Rob Hunter) In the wake of Halloween, there was a rush to pervert every holiday. The Canadians were the first to take a stab at Valentine’s Day, producing one of the most gruesome slashers of the decade. My Bloody Valentine marries the manufactured greeting card celebration with a Nova Scotian mining aesthetic, and the result is an utterly deranged splash of gore. The killer miner, at the heart of this tale, is a gas-masked tyrant destined to dig a treacherous chasm in your psyche. Whether he dies at the end or not, he will forever be locked in your subconscious, waiting to erupt whenever the lights go out. (Brad Gullickson) Along with authentic maple syrup and basketball, Videodrome might be the greatest gift Canada has given the world. In 1983, David Cronenberg, Toronto’s own king of venereal horror, delivered his take on the classic story of a man who falls headfirst down a conspiracy rabbit hole. Max Renn (James Woods) is the head of a schlocky TV-station whose interest in exploitation programming leads to a mysterious broadcast where snuff films are only the beginning. Videodrome is a shocking and brutally prescient exploration of media consumption that was as groundbreaking in the ’80s as it is now, both for its daring narrative and technical prowess. Long live the new flesh, indeed. (Anna Swanson)