6 Scenes We Love From ‘Who Framed Roger Rabbit’ 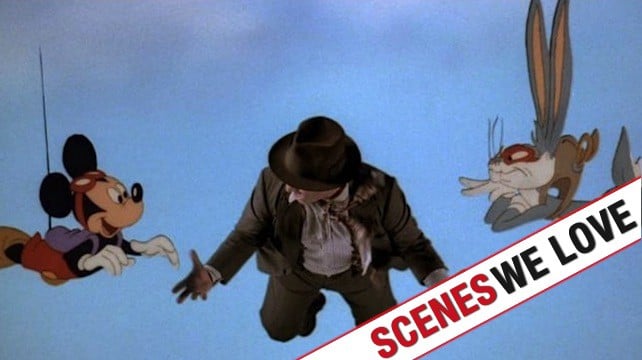 Yesterday was the 25th anniversary of the theatrical release of Who Framed Roger Rabbit. An innovative co-production between Walt Disney (via Touchstone Pictures) and Steven Spielberg’s Amblin Entertainment based on the novel “Who Censored Roger Rabbit?” by Gary K. Wolf, the live-action and animation hybrid has already been officially celebrated this year with a commemorative Blu-ray and DVD release hitting stores back in March. But this is the weekend to truly honor both the film and your memory of seeing it for the first time, amazed by the interactions between humans and toons and the mix of real and illustrated props and sets and the idea that you might be turned on by a two-dimensional redhead.

Roger Rabbit is not regarded nearly enough these days outside of the reporting of any latest news on its sequel ever actually happening. The Oscar-winning effects don’t astound as much as they did in 1988 (it was one of the first movies I was obsessed with watching specials on how it was made), the title character stopped being a regular and relevant star of theatrical shorts once Pixar came into play (interestingly enough, Toy Story was preceded by a re-release of the Roger Rabbit short Tummy Trouble, in place of a canceled original work featuring the character) and most unfortunately even with a special Academy Award recognition for his work as the director of animation here, Richard Willliams has hardly been given his due – though if you’re in Los Angeles later this week you can catch the excellent new documentary about him, Persistence of Vision, and some of his rarities at The Cinefamily.

Well, we continue to be huge fans of the movie and a lot of its memorable scenes, some of which we’re sharing with you on this occasion. As always, we invite you to p-p-p-please mention your favorite moments or love for the film in the comments section below.

The Maroon Cartoon short that begins the feature could be considered a whole film all its own. It certainly plays that way in spite of being interrupted with a yell of “cut!” before the conclusion. When looked at with this mindset, it’s hard to see how it qualifies as a scene, even though the four-minute animation is technically set in a single location and could be considered as such. The reason I’m including this whole opening, though, is that in the context of the movie it’s a scene in which the cartoon is being filmed. Once you’ve seen where it goes at the end, with Baby Herman and Roger Rabbit walking off the set and through the soundstage, it’s hard not to re-watch the short without considering what’s outside of the frame the whole time.

Or maybe that’s just me, always thinking beyond the peripheral. The gimmick of breaking the fourth wall as if the cartoons were actually being shot like a regular film continued for the first two spin-off shorts, Tummy Trouble and Rollercoaster Rabbit, but for some reason not with the third and final episode, Trail Mix-Up. The end of this scene is also infamous for being one of the controversially crude bits that viewers looked for once the frame-by-frame navigation of the laserdisc release was available. Herman is said to be sticking up his middle finger, which he extends up under a woman’s dress. There is at least something inappropriate about his expression as he walks between her legs.

There are a number of things to love about this lengthy scene in which Eddie Valiant (Bob Hoskins) heads to a night club in order to ultimately catch Jessica Rabbit with Marvin Acme (Stubby Kaye). There’s the idea of Betty Boop now waiting tables because she was forced out of stardom by color animation, a nod and equivalent to the real world’s transition from silent to sound. We’re made to feel bad for her for a second, too, until we see her buxom replacement, Jessica, on stage (personally, I’ve always had a preferential thing for actresses in black and white, but I’m weird). Then she brings on the guilt again by shutting Eddie’s gaping mouth.

The best part of this scene, however, is of course the dueling piano act featuring Donald Duck and Daffy Duck. Who Framed Roger Rabbit is notable for its crossovers, especially those involving Disney and Warner Bros. characters interacting. Here is some old time vaudeville entertainment broadened through zany and traditionally violent slapstick animation coupled with a few amusing jokes about the two ducks’ distinctly different speech impediments. Regarding the hard-to-comprehend dialogue, there was a rumor long ago that Donald swore at one point in the scene and even called Daffy the n-word. The script proved the misheard line to be perfectly tame.

There’s nothing wrong with being a little naughty. Who Framed Roger Rabbit wasn’t entirely a kids’ movie, and neither were a lot of classic cartoons. Jessica Rabbit recalls the sexuality of Tex Avery films, for instance, particularly Red Hot Riding Hood, which had been partially censored due to its depiction of a lusty wolf. Her number in the Ink & Paint Club scene is clearly a direct reference. Jessica became a sex symbol phenomenon following the release of this film even making the cover of “Playboy” in November 1988 with a human model wearing a drawn-on costume. Later, the Laserdisc release sold ridiculously well thanks to the revelation that you could see her bare crotch in an isolated frame.

This scene isn’t as scandalous as any of that, but it does feature her clever famous line, “I’m not bad. I’m just drawn that way.” Also, one thing that I don’t think I paid much attention to 25 years ago, the weird gag in which Eddie awkwardly rams the top of his head into the underside of Jessica’s massive boobs as he’s picking up his pants. Oh, and for the ladies, how about that bare chest on Hoskins? Nice monkey suit, I’d say.

“Shave and a Haircut”

There are two scenes in Who Framed Roger Rabbit that were constantly highlighted in behind the scenes features on the film’s effects. One is when Roger and Eddie are handcuffed together in the detective’s office/home. The other is this hide-out bit in Delores’s bar. Some things are almost too heavily flaunted, gimmicks that just really want to get our attention and pay notice to how the live-action props, furniture and overall setting are seemingly being effected by the animated characters. On top of all that, I just love the whole scene, including Doom (more on him in a moment), the weasels and particularly the drunks on hand, including the great dwarf actor Mike Edmonds.

And the Harvey joke is a nice touch, too. Especially since I got the reference back then. As for the “Shave and a Haircut” thing, did any kid understand what that was all about in the ’80s, even those of us who’d watched a lot of Looney Tunes cartoons? The video below includes the getaway and chase with the cartoon cab, which is arguably a different scene. But hey, we can have “two bits” here, right?

This one is definitely technically a sequence rather than a scene, but it’s hard to isolate. It works as a bracketed moment, from Eddie’s entry into the animated world via the Griffith Park tunnel (later used again by director Robert Zemeckis for Back to the Future Part II) to his return to live-action via the cartoon cab. It’s a lot of fun to watch the Toontown sequence over and over again trying to spot more and more cameos and references to the old classics (pretty sure I didn’t notice Mr. Toad even so prominently as he is in the foreground back in ‘88.

There’s also the more notable appearances from Droopy Dog, Tweety and of course Bugs Bunny and Mickey Mouse, who are put together for the same crossover significance as Donald and Daffy had provided earlier. Apparently there was a deal made with Disney and Warner Bros. that stipulated Mickey and Bugs had to be presented on completely equal ground (or air, as it were), and the same was true for the ducks, too. But I think Bugs has the bigger role and better lines in the scene.

We can’t talk about Who Framed Roger Rabbit without highlighting one of the greatest, most underrated villains, and a role that should be as often cited as Doc Brown when celebrating the talents of Christopher Lloyd. Judge Doom is simply sinister for most of the movie (though his execution of the poor cartoon shoe is just pure evil), and his master plan isn’t all that weird considering what actually historically happened to streetcars thanks to a conspiracy by General Motors, but he goes above and beyond the call of devilish duty in his final minutes, especially once he’s steamrolled and revealed to be a toon himself.

This is still a pretty tense scene for me to watch 25 years later, always forgetting how Roger and Jessica escape the approaching spray of “the dip” because I’m constantly fixated on what Doom is up to. I kinda wish his demise wasn’t so heavily an homage to The Wizard of Oz, but Lloyd handles it insanely well anyway and it’s quickly overlooked seconds later when the wall bursts and all our favorite cartoon characters pour out into the scene.

Bonus: How to do the Roger Rabbit dance: