If you’re looking to get a quick Cage fix here are 14 Nicolas Cage movies currently streaming on Netflix.
By Chris Coffel · Published on February 23rd, 2018

If you’re looking to get a quick Cage fix here are 14 Nicolas Cage movies currently streaming on Netflix.

As a society we love to get instant satisfaction. We want something when we want it and when we want it is now. Convenience is king and that’s a huge part of why streaming services for movies and television are so successful. Personally I prefer physical media and I’ve even written about the Nic Cage films that are lacking Blu-rays. With that said I totally get the appeal with streaming and take full advantage of what it has to offer.

At this moment streaming, Netflix specifically, has a whole lot to offer in the way of Nicolas Cage with 14 of his films available for your viewing pleasure. The assortment of films are mostly recent Cage efforts with all but three films coming post-2011, but it’s a good bunch. Grab your favorite Cage-approved snack and get to watching!

The one streaming Cage movie that was actually a hit, and his last hit really, is National Treasure. This is the movie where Cage plays a historian named Benjamin Franklin Gates and he goes off on adventures looking for artifacts and treasure. It’s like if you took Indiana Jones, stripped away everything that makes him cool and just left the nerdy elements. I don’t mean that as a dig either. I love National Treasure and could get onboard with some more adventures with Mr. Gates.

I’ve never seen The Ant Bully but I know it’s an animated film from the dude that created Jimmy Neutron and I guess it’s about someone that bullies ants? I don’t even know if Cage plays a big role in this film, but joining him in the voice talent department is Paul Giamatti, Julia Roberts, Meryl Streep and Bruce Campbell. I like all those people.

Next is that movie where Cage plays a magician that can see two minutes into the future. It was sort of based on a Philip K. Dick short story. I have lots of opinions on this crazy movie that I will save for a later Cage column, but in the meantime, you should watch it and spend many hours thinking about what it is you watched.

In Seeking Justice Cage stars as an English teacher looking to get vengeance on those that assaulted his wife. In doing so he teams with a vigilante group that he soon realizes takes things too far. This film is…not great. No one capes for Cage like I cape for Cage and even I find this to be a mildly entertaining at best, mostly boring, generic thriller. Cage is fine, but that’s about it.

Watching Trespass for the first time and I couldn’t help but think to myself, “Joel Schumacher tries so hard.” This movie about a couple held for ransom has a ton of flaws and issues and things that just don’t make any sense, but it also stars Nicolas Cage and Nicole Kidman. And when a movie stars both Cage and Kidman that’s going to be enough to make it enjoyable and Trespass is enjoyable. It’s a stupid movie, I know that, but I can’t help but have fun watching it.

In the mid-90’s Cage and director Simon West created cinematic gold with Con Air. In 2012 that got back together for Stolen and nobody noticed. That’s too bad because Stolen little thriller. Cage plays a master thief that ends up getting into a disagreement with his partner on a job. The disagreement costs them $10 million and Cage goes to jail. Once he gets out of jail his daughter is kidnapped by his former partner and the race to save her is on. Josh Lucas co-stars is a ridiculously fun and over-the-top performance.

Outcast is another one of the few Cage movies I have not seen so I can’t tell you if this movie is good. However, it’s Cage and Hayden Christensen as mysterious warriors fighting demons, maybe? I don’t know because as I’ve already said I haven’t seen it. So watch it? 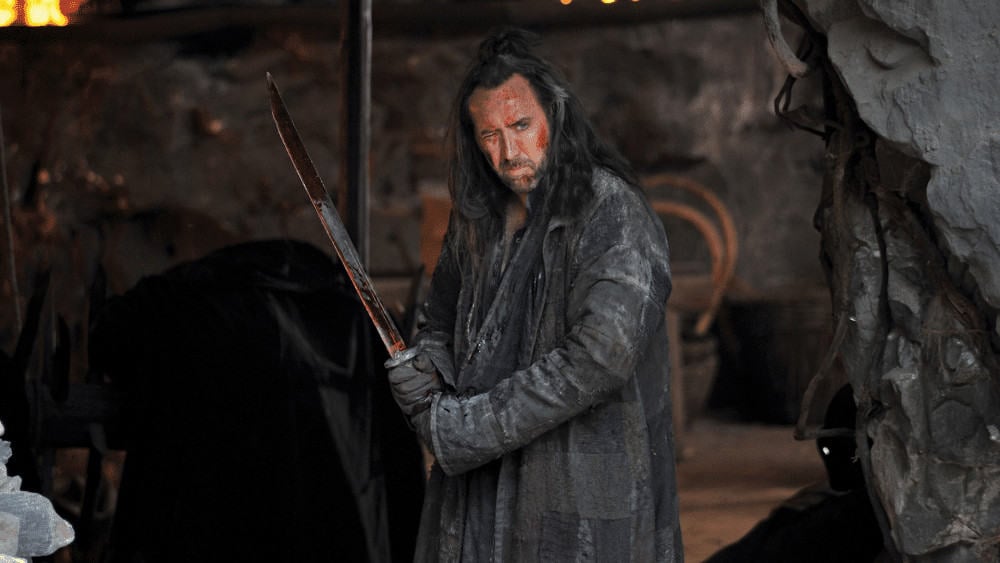 When it comes to Rage I am very conflicted. I want this movie to be good and I want to love it. Unfortunately, it’s not very good and that’s a real shame. Paco Cabezas is a talented director and I believe he and Cage are capable of creating magic together. This attempt just resulted in a rather bland thriller.

The Runner is about the BP oil spill and the terrible aftermath that followed. Cage stars as a politician from Louisiana that genuinely wants to help those that were negatively impacted by the spill. After giving a riveting and emotional speech on the floor of Congress his personal life begins to move into the spotlight and everything around him begins to come crashing down. Cage gives a fantastic performance in this one. It’s much more nuanced and restrained than one might expect. And it co-stars Peter Fonda which is always welcomed.

Cage has done a lot over his career, but one thing he hasn’t done a ton of is making horror movies and that’s a problem because I love horror movies. In recent years Cage has started to shift towards horror a bit more and in 2015 he did a film that actually takes place on Halloween with Pay the Ghost. In this one Cage’s kid is captured by some sort of demon and he must go to great lengths to save him. The film isn’t perfect, but it has some great Halloween imagery and worth an October watch.

Elijah Wood and Nicolas Cage have made one movie together. That was two years ago with a little picture called The Trust. They should make more movies together. In The Trust, they play a pair of bumbling Las Vegas cops that attempt to pull off a heist. This film starts as a sort of light-hearted comedy that takes a really dark turn. It’s good and I would recommend it.

There really are no words to describe at Dog Eat Dog but man does it get weird. This is another heist gone wrong movie that has its moments. Some scenes are fascinating and highly entreating and then some scenes are really awful. The bizarre nature of the film certainly makes it worthy of a watch. Cage goes full-on Bogart at one point, so strap in.

This movie drives me mad. Vengeance: A Love Story should be this really awesome Death Wish knockoff but it’s not. I don’t know what this is, but it ain’t good. I do, however, encourage everyone to watch this. Watch it and then reach out about that crazy court scene. And what is this movie trying to say about church? I have so many questions.