A peek behind the curtain: this bracket gave us the most trouble out of all the 31 Days of Halloween lists. Definitions were tossed around, examples were given — but the more we tried to define what made a “Cosmic Horror” film, the more confused we got. Which is, of course, deeply, hilariously ironic.

Cosmic Horror is tied in the popular imagination to horror’s racist uncle H.P. Lovecraft, who defined it as “the fundamental premise that common human laws and interests and emotions have no validity or significance in the vast cosmos-at-large.” But things start to get confusing when you realize that Lovecraftian Horror and Cosmic Horror aren’t the same thing. And likewise, that merely being set in the cosmos does not a cosmic horror make. All told, Lovecraft’s definition is best: that cosmic horror fundamentally involves a terror predicated on the dislocation and dwarfing of human sense and understanding. Simply put, it is the disorienting horror of bumping up against something you don’t understand. That you can’t understand.

If gazing slack-jawed into the unknowable sounds like a fun night in, have we got the list for you. Keep reading for a look at the top ten cosmic horror films as voted on by Chris Coffel, Kieran Fisher, Brad Gullickson, Rob Hunter, Jacob Trussell, and myself.

The dawn of man. We get by with a little help from our friends. Our ancestors took a little bit of knowledge from beyond the infinite and transformed it into a killing blow. From our ability to take the life of another we rose out of the primordial ooze. Our great intelligence transformed into a series of potential catastrophe. A bone club launches into space and orbits the earth with enough firepower to obliterate our third rock from existence. With one small step, we create artificial life and become victim to its judgment. 2001: A Space Odyssey is a staggering work of cinema in which Stanley Kubrick and Arthur C. Clarke track humanity’s evolution through its great leaps in terrifying technology. Will we ever be worthy of the intelligence gifted upon us? Are our great brains doomed to descend rather than ascend? Is the Star Child a momentous triumph or just a next stride to doomsday? We are but apes forever reaching for the moon – Brad Gullickson 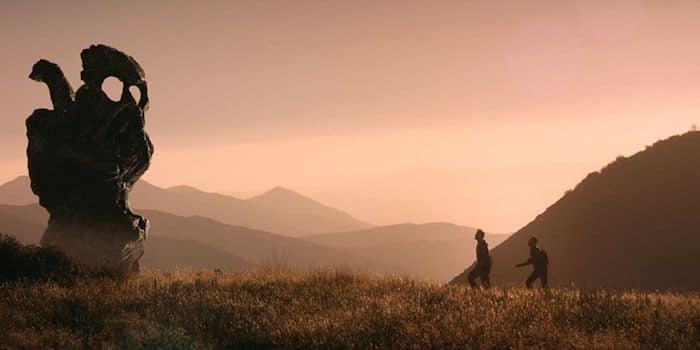 What’s effective in The Endless is what is unknown, and for a large part of the movie, everything is unknown. What happened at this UFO death cult so many years ago that made two devotees leave? What is lurking out in the woods that have caused so many earthly anomalies around the community’s campgrounds? And why has no one aged? At the core of Justin Benson and Aaron Moorehead‘s sci-fi/horror tale are two brothers attempting to make up for the arrested development of their lives, but the scope of the story explodes as their work melds with their past filmography in a wholly unexpected way. Fatalistic and heady, The Endless is a curious look at thoughts and ideas just beyond the spectrum of our imaginations — Jacob Trussell

A surface glance at Paul W.S. Anderson‘s Event Horizon might seem to argue against its inclusion on this list as rather than face an unknown the characters here are faced with hell. But in addition to the mystery of the black hole — is it a purely scientific anomaly, or is it a gateway to true evil?— it’s clear that these are hells of their own design. They can’t understand or comprehend their fates, and that fear of the unknown is exactly what terrifies the crew members. What is hell, after all, but the things that cause us our own greatest pain? It’s different for each of us, and as characters are subjected to a glimpse into this void their attempt at understanding comes in the form of unique suffering — Rob Hunter Peter Weir’s gauzy Aussie period piece might not have any of the traditionally tentacled cosmic horror hallmarks. But upon closer inspection, it absolutely fits the bill. Hanging Rock concerns a group of boarding school girls who disappear during a school outing. Time gets funny, and as if drawn by some magnetic force, they climb the outcropping and never return. Whether the girls were raptured, lost, or suicidal remains a matter of mystery. It’s a lack of certainty that Weir never resolves; that, instead, exposes the fragility and impotence of the film’s authority figures in the face of the unknown — Meg Shields Based on the manga of the same name, Uzumaki is an overlooked gem that didn’t gain the international recognition it deserved during the J-horror boom of the late 90’s and early 00’s. While the rest of the world was transfixed on the nation’s cinematic ghosts, this weird movie about a small town population being turned into spiral-shaped monstrosities flew under the radar. This is a nightmare on film— but that’s the beauty of it. The horror that unfolds is otherworldly and unexplainable, but it merely enhances the notion that the universe works in mysterious and terrifying ways. The inhabitants of the town in Uzumaki are tormented by the unknown and the film never clearly states why or how it’s happening. One day we’re all going about our business. Then, before we know it, we’re snails. – Kieran Fisher Taking a meta approach to filmmaking is a risky proposition. There’s always the possibility the film veers off into the mocking parody territory and if you’re dealing with a genre film that can elicit a negative reaction from the hardcore fans. Drew Goddard and Joss Whedon tiptoed this tightrope perfectly with the wonderfully entertaining, and incredibly bloody, The Cabin in the Woods. This is a movie that takes all the horror tropes that have been established over the years and uses them just as we know them while also managing to flip them on their head. It’s geared specifically towards those that love horror movies and those that hate them. As the film playfully toys with every genre convention imaginable it tries to get to the bottom of why all those terrible things that happen in horror movies happen. Turns out there are some evil gods that need appeasing. I knew it — Chris Coffel

If the crux of cosmic horror is a dizzying sense of established order coming apart at the seams— Annihilation takes the cake. Some unknown thing has landed in the wetlands. What it wants, and why its presence has caused reality to fold in on itself, is a mystery. Its presence has turned madness into a matter of proximity. By the end of the film, we’re none the wiser about the entity’s intentions or the kaleidoscopic fractals at its epicenter. What we’re left with is disorientation; vertigo after bearing witness to the collapsing of all things — Meg Shields

If you’ve spent any amount of time in a busy supermarket then it’s highly likely that you’ve felt like insignificant meat in the grand scheme of things. But when you’re trapped in one because there’s a spooky mist outside that’s harboring creatures from the unknown… well, that’s pretty brutal as well. This is also the basic set-up of this Stephen King adaptation from Frank Darabont. It’s a simple story about monstrous invaders in many ways. At the same time, it’s also shrouded in mystery and ambiguity and feels apocalyptic. And while the overarching terror may be cosmic, the film also told us that the real horror was George Bush’s America. The shocking ending also contains some of the funniest gallows humor you’re ever likely to see. It’s such a shame that the TV show isn’t very good. — Kieran Fisher No film, whether from the horror genre or not, has captured the concept of loneliness with as painful a precision as Kiyoshi Kurosawa‘s Pulse. The film gives new meaning and power to the word “haunting” as it shows us a world where even the undead have come to dread the feeling of being alone in the universe. Ghosts are forcing their way back into our world, the living are committing suicide, and the world is crumbling beneath the weight of misery and ambivalence towards this thing we call existence. The film is equal parts terrifying and fascinating, but both feelings are layered with the depressing fear of not feeling anything at all — Rob Hunter

Words are dangerous. With the click of a keypad or the flicker of a pencil, lives can be made or unmade. But the creator at the desk is not you. Do you read Sutter Cane? Crack the spine and discover your place in the universe. Skip to the end – you’re both the pawn and the star of your own story. In the Mouth of Madness is the closest cinema has ever come to capturing the existential dread upon which H.P. Lovecraft built his church. While others have attempted to directly adapt the unimaginable/unshowable horror of “The Lurking Fear” or “The Call of Cthulhu,” John Carpenter wisely sidestepped direct reference by focusing on his engine of cosmic paranoia. From space, humans are but a speck of insignificance, and yearning beyond such lowly station can only result in catastrophic knowledge. You are less than a fly. You’re a meaningless accident of biology. At best you are the butt of a joke to a creature raising its foot above your head – Brad Gullickson